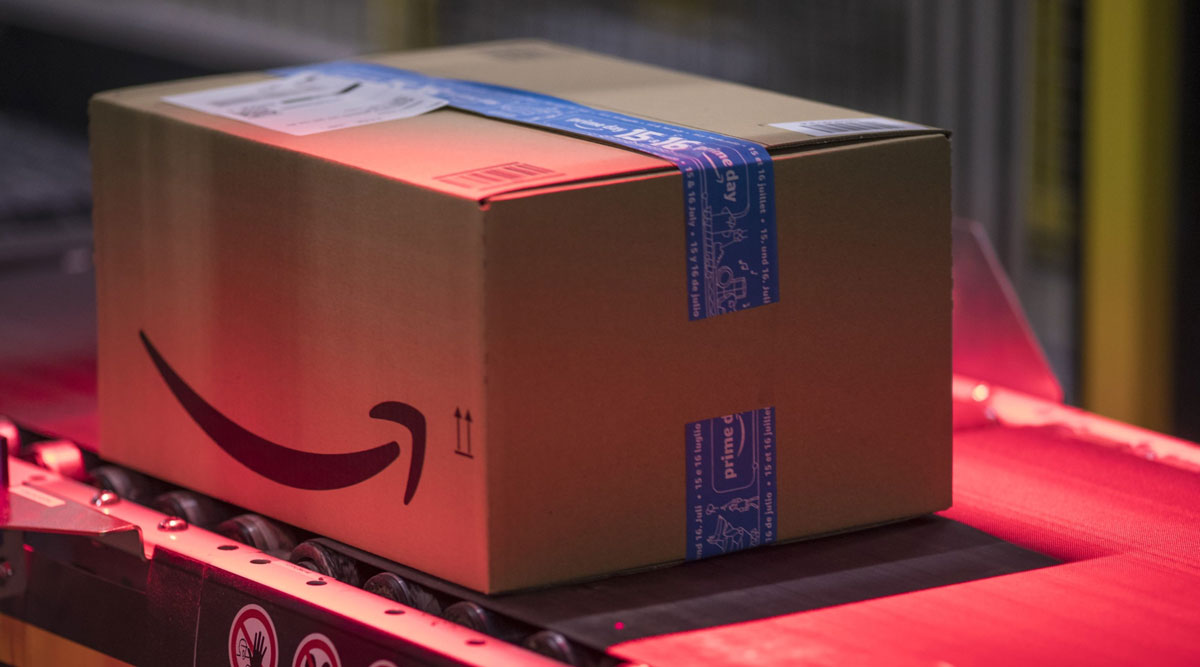 Amazon.com Inc. plans to open 1,000 small delivery hubs in cities and suburbs all over the U.S., according to people familiar with the plans. The facilities, which will eventually number about 1,500, will bring products closer to customers, making shopping online about as fast as a quick run to the store. It will also help the world’s largest e-commerce company take on a resurgent Walmart Inc.

Amazon couldn’t fulfill its two-day delivery pledge earlier this year when shoppers in COVID-19 lockdown flooded the company with more orders than it could handle. While delivery times have improved thanks to the hiring of 175,000 new workers, Amazon is now consumed with honoring a pre-pandemic pledge to get many products to Prime subscribers on the same day. So with the holidays approaching, CEO Jeff Bezos is doubling down by investing billions in proximity, putting warehouses and swarms of blue vans in neighborhoods long populated with car dealerships, fast-food joints, shopping malls and big-box stores.

Historically, Amazon gnawed away at brick-and-mortar rivals from warehouses on the exurban fringes, where it operated mostly out of sight and out of mind. That worked fine when the company was promising to get products to customers in two days. Now Walmart and Target Corp. are using their thousands of stores to beat Amazon at its own game by offering same-day delivery of online orders. Walmart also recently started is own Prime-style subscription service, upping the competitive ante. 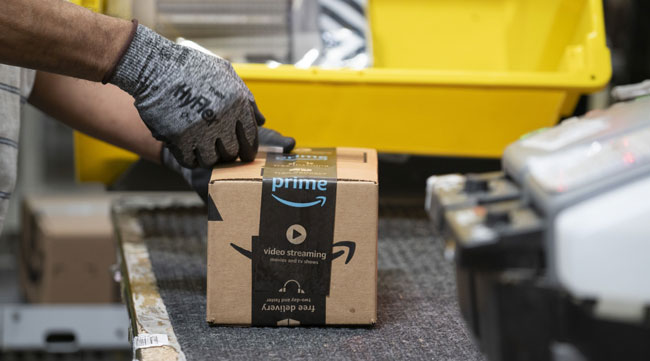 A worker places a label on a box at the Amazon fulfillment center in Baltimore, Md. (Melissa Lyttle/Bloomberg News)

A recently opened warehouse in Holyoke, Mass., exemplifies Amazon’s answer to this existential challenge. Located not far from a once vibrant mall, it’s just a short drive from more than 600,000 people. The goal is to creep closer to almost everyone in the U.S.

Beyond Amazon’s retail rivals, the mass opening of small, quick-delivery warehouses poses a significant threat to UPS Inc. and the U.S. Postal Service. Being fastest in the online delivery race is so critical to Amazon’s business that it doesn’t trust the job to anyone else and is pulling back from these longtime delivery partners. Amazon is in some ways duplicating UPS’s logistics operation. Many of Amazon’s new hubs are within walking distance of UPS facilities.

“In just a few years, Amazon has built its own UPS,” says Marc Wulfraat, president of the logistics consulting firm MWPVL International Inc., who estimates Amazon will deliver 67% of its own packages this year and increase that to 85%. “Amazon keeps spreading itself around the country, and as it does, its reliance on UPS will go away.”

The company declined to comment on the expansion plans, but has said its last-mile delivery efforts are meant to supplement, not replace, its longtime partners. “Our dedicated last-mile delivery network just delivered its 10 billionth package since launching over five years ago, and we’re proud to provide a great service for our customers,” a spokeswoman said. 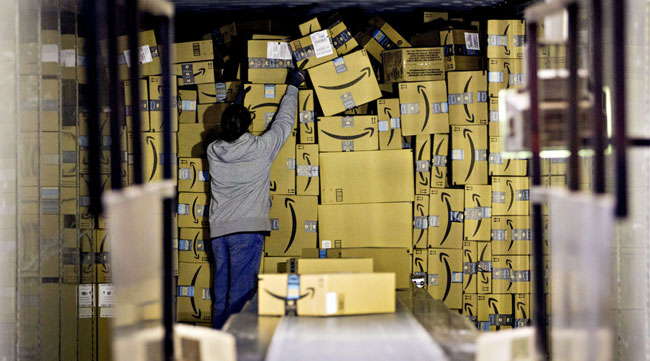 A worker unloads a truck of Amazon packages at a UPS hub in Hodgkins, Ill. (Daniel Acker/Bloomberg News)

The company’s appetite for real estate is so strong that many analysts have speculated that Amazon would convert vacant department stores into distribution centers. In fact, that option is only a last resort, said the people privy to the company’s plans, who requested anonymity to discuss an internal matter.

Department stores such as J.C. Penney are often two stories and lack sufficient loading capacity, they said, meaning they require extensive remodeling to accommodate an Amazon delivery hub. Moreover, mall leases with existing tenants often prohibit the owner from introducing a delivery hub that could spoil the shopping experience, and city officials might not quickly approve an industrial use in a retail area. It’s more likely that dead malls will be bulldozed to make way for an Amazon warehouse, as they have in the Midwest, than for an Amazon delivery station to sprout in a half-vacant mall to coexist with Kay Jewelers and Cinnabon.

Still, analysts expect underutilized retail space to make way for more e-commerce delivery stations due to rising rents for industrial space, along with a surge in store vacancies. “Any time you see retail being occupied by nontraditional retail uses, they’re just holding off what’s inevitable,” says Rick Stein, principal at Urban Decision Group, who estimates the U.S. has 50% more retail real estate than it needs. “It’s a Band-Aid, and at some point that mall is coming down.”

In the past three years, 13.8 million square feet of retail space has been converted to 15.5 million square feet of industrial space, including vacant shopping malls razed to make room for new warehouses, according to a July report by the commercial real estate firm CBRE Group Inc. That trend will continue but not quickly enough for Amazon, which is building new facilities and moving into existing warehouses where it’s faster to get a hub up and running.

Amazon usually puts new delivery stations inside existing warehouses or signs long-term leases with development firms like ProLogis Inc. to build them to its exacting specifications. Typical delivery stations are about 200,000 square feet — about one-fourth the size of one of the company’s giant fulfillment centers — with large lots where workers can park their personal vehicles and Amazon can stage delivery vans. About 20 tractor-trailers arrive each night to drop off packages, which are loaded into hundreds of vans each morning before drivers fan out to make their rounds. In the afternoons, hundreds more Amazon Flex drivers, who use their own cars, arrive to deliver whatever’s left. A typical hub can generate more than 1,000 vehicle trips each day, often in areas where roads are already congested. 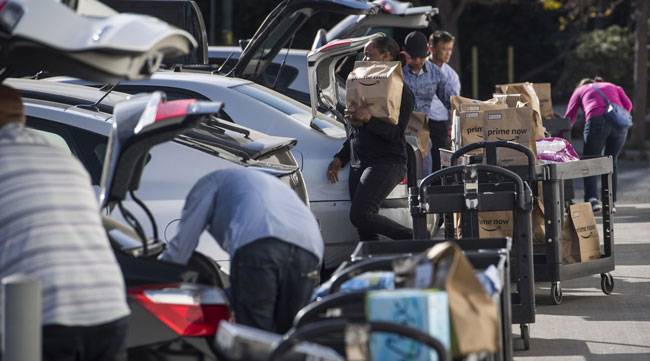 The surge in online shopping creates challenges for cities that still plan for growth and transportation needs based on people shopping at stores. They’ll have to make more room close to residential areas for warehouses with big parking lots that generate a lot of traffic, creating inevitable clashes with local residents who want things delivered to their homes but don’t want to have to look at a delivery station or get stuck in traffic behind a convoy of Amazon vans.

“Regulation is definitely flat-footed right now,” says Nico Larco, an architecture professor at the University of Oregon, who studies urban land use. “The warehouse doesn’t want to be tucked away in an industrial district anymore. It wants to be right next to you. But when these things come to our neighborhoods, they’re unsightly.”

NIMBY wars haven’t slowed down Amazon so far. The company is opening three facilities in Kearny, N.J., this year, among more than a dozen slated for the Garden State. The small township near Newark airport offers proximity to shoppers in the New York suburbs and is less than 10 miles from Manhattan’s Lower East Side, making it a prime location. Mayor Alberto Santos has noticed a “weird gentrification process for warehousing” since Amazon came to town, with rents skyrocketing.

“They don’t stop at one,” Santos says of Amazon. “They keep picking up sites, which drives up prices for everyone else. Kearny is one of those locations that had large warehouse and small warehouse users. This could crowd out that small user that has to find an alternative further away.”

Back in Holyoke, planning board member Eileen Regan says Amazon’s delivery station prompted some concerns about traffic from nearby residents but didn’t face significant opposition. The company staggered shifts to keep delivery vans off roads during peak travel times, which is also in Amazon’s interest, she says. Initially, Regan worried that traffic from both Amazon and the mall during the holidays could clog streets, but COVID-19 will likely keep shoppers at home, leaving more room for those Amazon vans.

“I’m glad Amazon is there because so many retail facilities have gone under during this pandemic,” she says. “I’m glad that we have them to keep things running.”