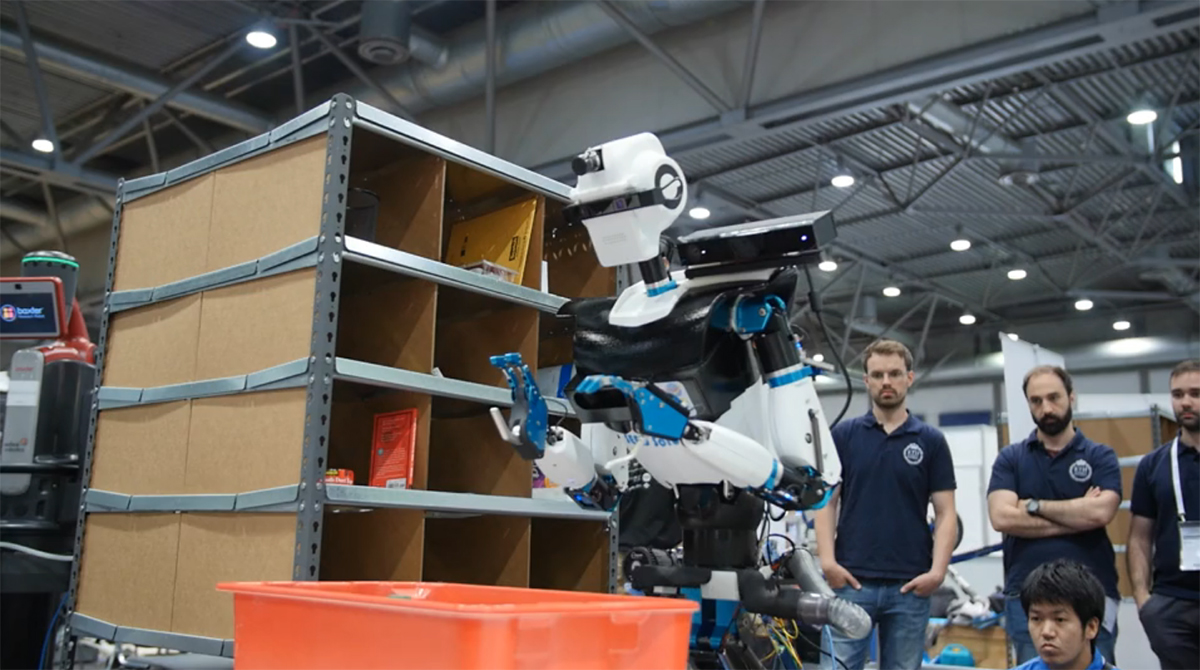 Sixteen teams of robotics researchers are traveling to Japan this week to help Amazon.com Inc. solve its warehouse problem.

The company has a fleet of robots that drive around its facilities gathering items for orders. But it needs humans for the last step — picking up items of various shapes, then packing the right ones into the correct boxes for shipping. It’s a classic example of an activity that’s simple, almost mindless, for humans, but still unattainable for robots. Starting July 27, the company is running the Amazon Robotics Challenge, the third annual contest for robots that push those limits.

Both academic and commercial roboticists have been putting a lot of energy into solving what’s sometimes referred to as the “picking” challenge, and Amazon is trying to direct that energy towards its specific needs. In one part of the contest, teams fill a shelf with a random assortment of items that Amazon provides — a champagne glass, a roll of duct tape, scissors, a children’s book entitled “Robots, Robots Everywhere” — and their robots pull out specific items, packing them into boxes that represent pretend Amazon orders. In another, robots confront a jumble of items, and pack them onto shelves that resemble those in Amazon warehouses, remembering where each one went. There’s about $250,000 of prize money at stake, including $80,000 for the top prize.

Amazon gets nothing out of this, directly. But their own robotics team can potentially pick up techniques, or even new colleagues — it has hired people who have entered past contests. More broadly, having robots that could reliably carry out the tasks from the challenge on their own would be a big step towards fully autonomous warehouses, which theoretically could run faster, cheaper, and around the clock.

This raises uncomfortable questions about the future prospects for warehouse workers. In May, there were 949,000 people working in the warehouse and storage industry in the U.S., making an average wage of just under $20 an hour, according to the Bureau of Labor Statistics. The number of people working in the warehouse industry has grown 43% over the last decade, and wages have kept pace with inflation, even as a first wave of automation has taken place. Optimists argue that more automation leads to more growth, creating better jobs elsewhere. Pessimists are basically predicting that artificial intelligence will usher in an economic apocalypse.

Another group of workers with a wary eye on Amazon’s interest in the field are those who work for smaller robotics companies. Amazon represents a potentially lucrative future client, given its wide network of warehouses. Of course, it’s also a competitor. Startups privately grumble that Amazon is using the contest to outsource development on the cheap. In a market where Google paid a single engineer $120 million to help develop automated vehicles, $250,000 for any usable information on automated warehouse robots basically rounds down to zero. Laboring — even indirectly — below the market rate for one of the world’s most valuable companies, they say, is insane.

Startups like Right Hand Robotics and Universal Logic claim that their systems are far more sophisticated than what has come out of Amazon’s challenge so far. Yaro Tenzer, a co-founder of Right Hand Robotics, is in Japan for RoboCup 2017, the conference where Amazon’s contest takes place. He says he may recruit participants, but sees little reason to show off his company’s techniques publicly. “The value for us is staying ahead of everyone else,” he said.

So why do it? Some participants in Amazon’s contest, who are mostly grad students and academics, are looking for jobs. And while there have been complaints about Amazon’s stinginess, the rewards this year are about three times as high as past prizes. Ashley Robinson, a spokeswoman for Amazon, says the company raised the prize levels because the contest is harder than it used to be.

Alberto Rodriguez, a professor at MIT’s department of mechanical engineering who leads a team from MIT and Princeton, puts it in more idealistic terms. He sees value in getting a bunch of researchers pointed in exactly the same direction. “There’s some notion of common knowledge that has been generated because so many people have been motivated to work on the same problem,” he said.

The teams have become increasingly sophisticated in their approaches. They started with algorithms that required them to program rules so robots could distinguish specific objects in the contest. They now use neural networks, a form of artificial intelligence that helps robots learn to recognize objects with less human programming. The biggest difference this year is that Amazon isn’t telling the teams which items they’ll see in advance. Instead, it gives them 40 items to train their systems on, then replaces 20 of them with new objects a half hour before the contest starts. This undermines a basic strategy from last year, when teams fed the systems hundreds of images of each item they’d see from all different angles and in different lighting. “That worked, but it was an unrealistic solution in a real world scenario,” said Rodriguez.

Whether Amazon will be able to leverage the contest to leapfrog other companies working on similar problems has yet to be seen. The company hasn’t incorporated anything from the contest into its actual operations, according to Robinson. Kris Hauser, the faculty advisor for this year’s team of students from Duke University, says a warehouse staffed with fully autonomous picking robots is still several years away. Amazon’s guidance, he says, keeps academics like himself from straying too far into the theoretical. “This is really forcing us to look at these problems from the point of view of a potential commercial technology,” he said. “When we take research products and try to put them out in the real world, we’re oftentimes surprised at how bad they perform.”