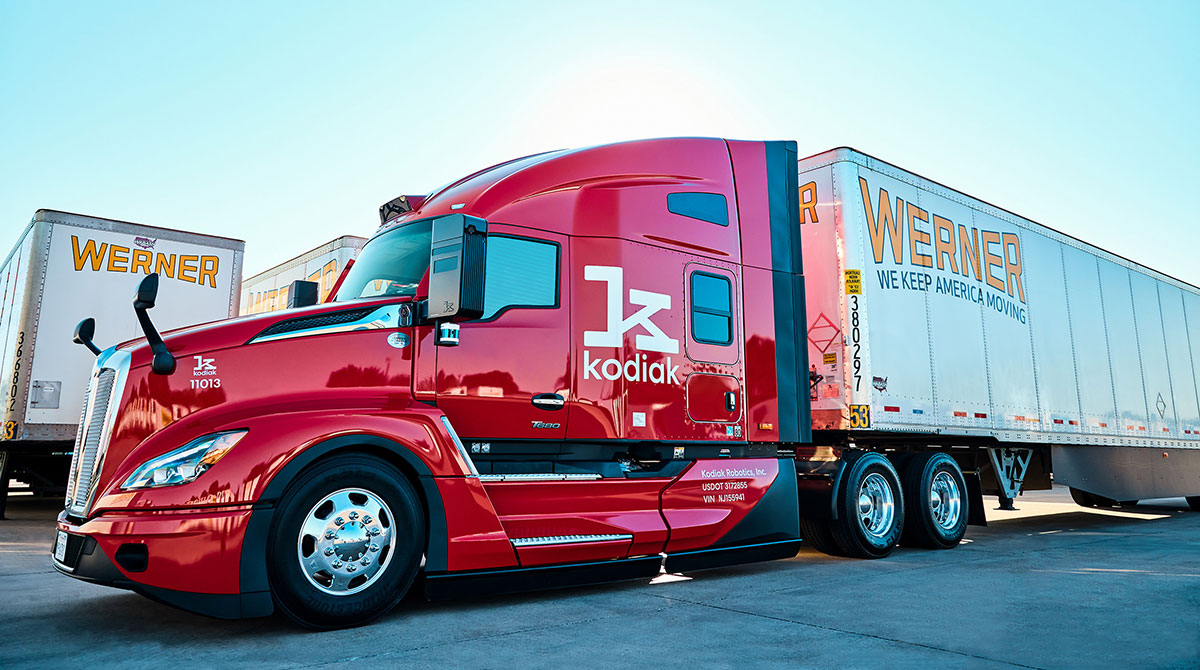 The partnership started the prior month with a weeklong pilot program involving eight unique trips between Dallas and Lake City, Fla.

“Werner Enterprises is one of the nation’s largest transportation and logistics providers and we are collaborating with them to establish an autonomous trucking lane,” Kodiak CEO Don Burnette said. “Part of that collaboration was to complete a weeklong pilot, which showcased 24/7 operations. That’s something that we’ve really been talking about in the autonomous space.”

We’re excited to announce our collaboration and recent pilot with @One_Werner, one of the nation’s largest transportation and logistics providers. Together we'll work to establish an autonomous trucking lane and showcase the transfer hub model!
Read more https://t.co/qZaVcgPcEV pic.twitter.com/cNIzttUrg8 — Kodiak Robotics (@KodiakRobotics) September 29, 2022

Werner had trailers ready for a Kodiak self-driving truck to pick up on both ends of the trip. Its local drivers completed the first-mile pickups and last-mile deliveries once the autonomous truck delivered freight to the transfer hubs. Kodiak said it completed 152 hours of driving time and achieved 100% on-time delivery performance.

“That was to really stress-test the 24/7 aspect of what is possible with an autonomous driver,” Burnette said. “And what we want to do now, and what we’re working with them on, is to find a lane that we can operationalize on a day-in and day-out basis for a long-term project.”

Burnette noted the pilot also aimed to show how efficient the transfer hub model can be. The process involves the autonomous trucks pulling into a staging area where a driver would take control to reposition the tractor onto a trailer. The truck would then be moved to a departure area where the driver would get out before the truck continued on to its destination.

“One of the things that we’re really excited about was that 94% of the miles driven were done successfully in autonomous mode,” Burnette said. “And we think that for a first-time pilot with them, first time working with them, it is a very high percentage.”

The Kodiak Partner Deployment Program was established to help carriers build autonomous freight operations and seamlessly integrate driverless technology into their fleet. U.S. Xpress became the first truckload partner in the program April 7. Its autonomous route ran between the Dallas-Fort Worth area of Texas and Atlanta. Werner is now the newest partner in the program.

“Working with Kodiak enables us to efficiently incorporate new technologies into our business while giving us a competitive edge,” Chad Dittberner, senior vice president of van and expedited at Werner, said. “We’re eager to establish the hybrid model of drivers and ongoing autonomous lanes to create new and unparalleled levels of efficiency while staying focused on Werner’s value of putting safety first.”

Burnette noted the new partnership is an evolution of what the development program has been able to accomplish so far. The recent week-long pilot was the largest so far with 7,957 miles driven over the eight loads.

“Something I really want to stress is that the autonomy system was running for 152 hours straight,” Burnette said. “Of course we have a safety driver behind the wheel, and we’re swapping out that safety driver and, of course, abiding by all of the hours-of-service requirements that drivers have to do. But the system itself was running for that entire time. And the truck only stopped to fuel, to drop off loads, to pick up loads. And that is really why this is so significant, this is the biggest, longest, highest performing such pilot that we’ve done to date.”

The Kodiak driverless technology has been primarily designed around the highway portions of longhaul routes. Its modular hardware approach integrates sensors into a streamlined sensor-pod structure to optimize monitoring, scalability and maintainability.

“We are building a nationwide autonomous freight network, and part of what we are so excited about is Kodiak’s ability to expand that network quickly,” Burnette said. “More quickly than our competitors can, utilizing what we call sparse mapping technology. That’s a proprietary and innovative mapping system that we’ve develop from scratch in-house, which is really pushing the industry forward.”