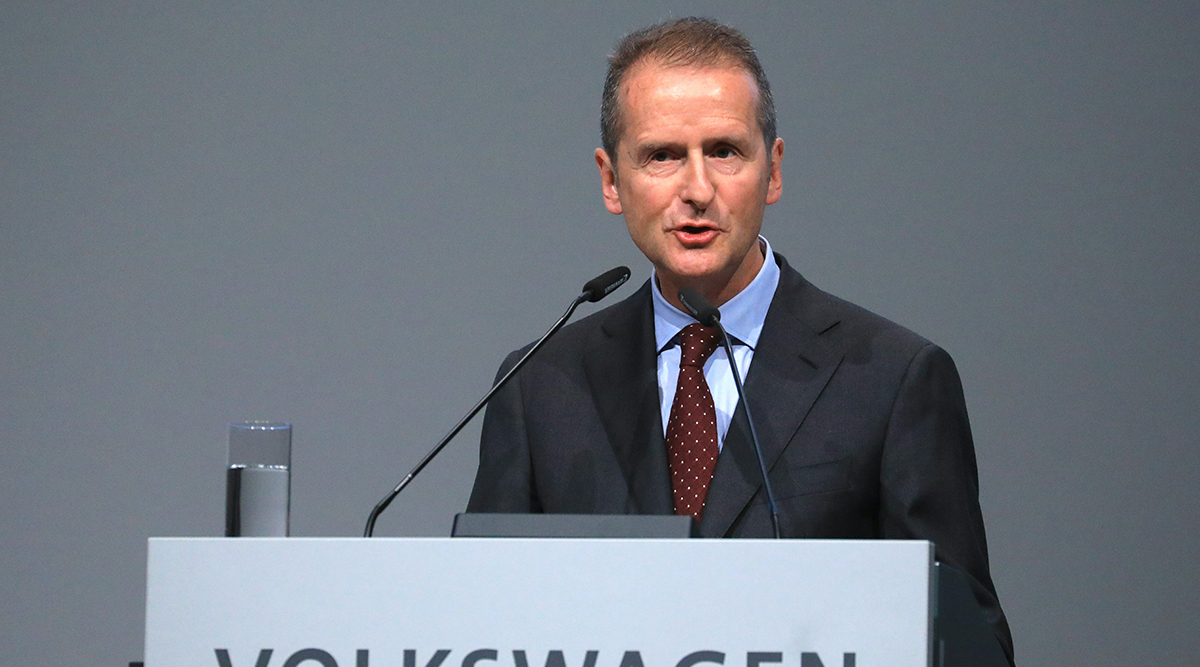 Herbert Diess, CEO of Volkswagen AG, pledged to step up integrity and compliance efforts as part of the German manufacturer’s deepest overhaul since the diesel-emissions scandal came to light in 2015.

“Volkswagen has to become more honest, more open and more truthful,” Diess said May 3, addressing shareholders for the first time in his new role at the company’s annual general meeting in Berlin. “Besides abiding by the rules and obeying the law, the key here is always ethics — a clear moral compass.”

VW will adopt the principles of the globally recognized Ethics & Compliance Initiative, which helps drive corporate best practices, he said.

Diess, 59, is pushing to move on from Volkswagen’s biggest crisis, which erupted nearly three years ago. While the world’s largest car manufacturer has bounced back faster than anticipated with record deliveries and profit, shareholders haven’t let up criticizing the company’s poor governance record as investigations into its cheating on diesel emissions in 11 million vehicles worldwide continue.

Since the scandal was uncovered, the Wolfsburg, Germany-based carmaker has faced a barrage of lawsuits with earmarked costs exceeding 25 billion euros ($30 billion) for fines, settlements and other expenses. Court cases and investigations are continuing as disgruntled investors and car owners in Europe seek damages, too.

Volkswagen also is pushing ahead with its own scrutiny of the scandal. While VW-mandated U.S. law firm Jones Day concluded an external investigation, probes by other legal advisers including Gleiss Lutz will take more time, Chairman Hans Dieter Poetsch said.

“We need even better knowledge of the incidents,” he said.

VW is “constantly exploring” possible damage claims against officials related to the wrongdoing, including former board members, he said.

The new CEO has vowed to accelerate a sweeping strategy shift, including preparing the trucks unit to access capital markets, after the abrupt departure of predecessor Matthias Mueller last month, who steered VW through the scandal.

“VW Truck & Bus will be structured to be largely autonomous, rather than steered by the group,” Diess said in Berlin. Poetsch said last month a potential share sale of the unit would be limited to a minority stake as VW will maintain control over the business.

“The key question is to which extent labor unions are supporting the urgently needed overhaul under the new CEO,” Ingo Speich, senior portfolio manager at Union Investment, said by phone. “The enormous complexity of VW group makes structural changes inevitable, otherwise the industry transformation over the next 10 years will hurt the company’s competitiveness.”

Cozy ties among senior managers, worker representatives and state politicians often have bogged down decision-making at VW, and its insular corporate culture did little to prevent the diesel-cheating. As VW seeks to make changes, it remains largely shielded from outside influence. About 90% of voting stock is controlled by the Porsche and Piech billionaire family, Lower Saxony and Qatar. The key stakeholders have made little progress so far in adding independent, external candidates to the 20-member supervisory board, where unions account for half the seats.