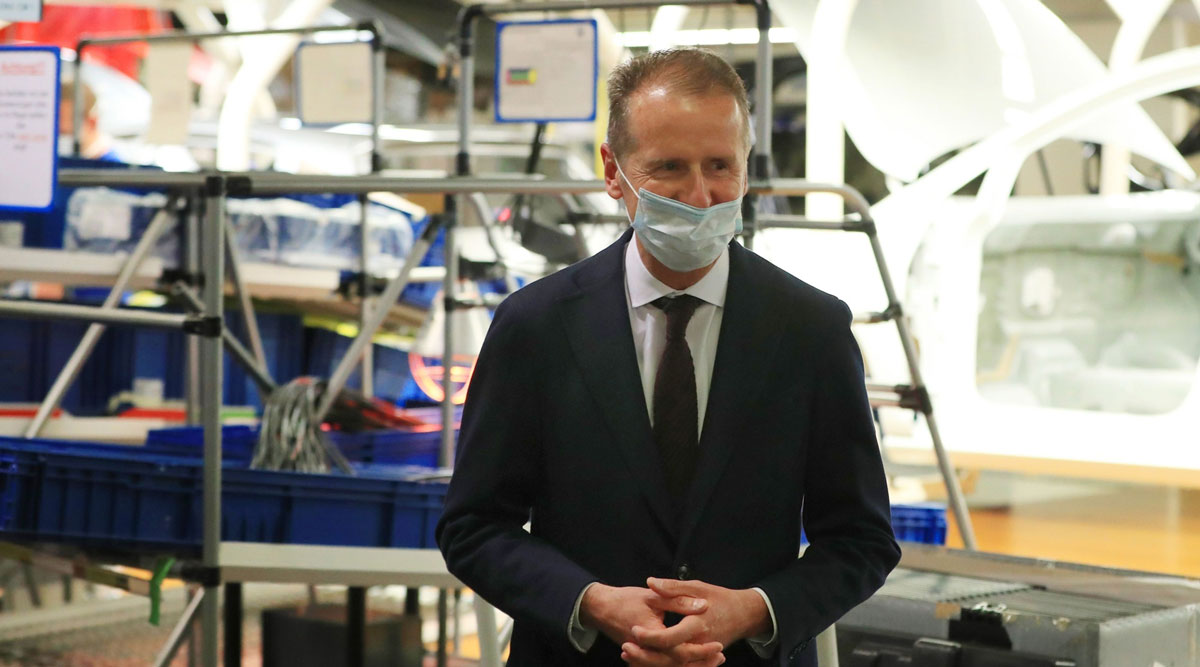 VW CEO Herbert Diess said that when it comes to electric cars, "if you're not fast enough, you're not going to survive." (Krisztian Bocsi/Bloomberg News)

Volkswagen AG CEO Herbert Diess vowed to pursue a sweeping transition to electric cars, declaring it a matter of survival even as the coronavirus risks upending business in the near term.

While the world’s largest carmaker has a “healthy order bank,” its development in the coming months hinges on major economies controlling the disease and averting restrictions that would hurt demand and operations, Diess said Nov. 5. Despite the uncertainties, VW will press ahead with aggressive investment in new technology to avoid falling behind as the auto industry fundamentally changes.

“If you’re not fast enough, you’re not going to survive,” Diess said during a virtual Bloomberg event. “In the long run, climate change will be the biggest challenge mankind is facing.”

While the CEO warned another lockdown would be “difficult to manage,” the German automaker has shown it can weather turbulence. It swung back to profit in the third quarter, echoing robust results from peers including Daimler AG, Tesla Inc. and Ford Motor Co. on the back of a swift demand recovery in China.

Another wave of new infections in key markets, an unsettled U.S. election and Britain’s messy exit from the European Union are bearing down on the auto industry. Car registrations fell in Europe’s four largest auto markets last month, signaling that sales have relapsed after a surprise gain in September.

Beyond managing through those issues, the more complex task for Diess is positioning the 83-year-old industrial behemoth for the future. Volkswagen, which operates the Audi, Porsche and Lamborghini brands, mastered the combustion engine and now wants to control the software brains for next-generation vehicles.

“This is the most important race and decisive point for our industry in the next five to 10 years,” the 62-year-old executive said, adding he won’t compromise on the company’s technology road map even if the coronavirus crisis saps sales. “We think we can do it. We have software skills, and we are ramping up fast.” 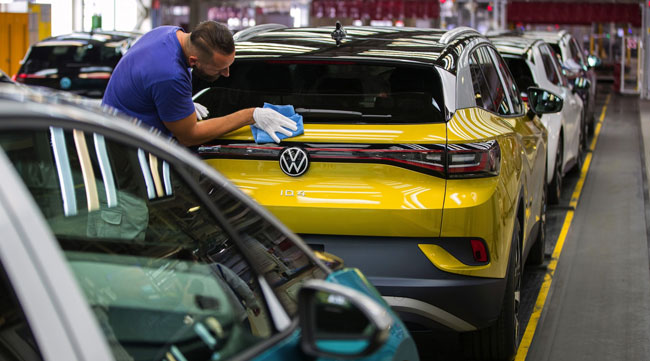 An employee polishes a Volkswagen ID.4 SUV at the company's factory in Zwickau, Germany, on Sept. 18. (Krisztian Bocsi/Bloomberg News)

Pulling off the transition and trying to catch up with Tesla have been made all the more challenging by divisions within VW’s supervisory board and powerful works council, which publicly clashed with the former BMW AG executive earlier this year.

The coming months will be critical for the CEO to show his electric push is working. After the launch of the Europe-focused ID.3 hatchback was delayed due to software problems, VW is going global with the introduction of its crossover sibling, the ID.4, which will be built and sold in China and eventually the U.S.

To bolster its electric push, Volkswagen plans to raise investment in the technology, build up battery production capacity and transform entire plants to churn out electric cars, Diess said. Even the ultra-luxury Bentley brand will become electric within four to five years, he said.

VW’s supervisory board will meet next week for the annual review of the group’s investment plans. Budgets are poised to tighten after the pandemic weighed on economic prospects, while analysts are concerned about Diess’ efforts to lower costs.

Because of the fallout from the coronavirus, “There are several million cars missing in our planning, so we have to adapt,” Diess said. “It’s a long-range crisis recovery plan. It reinforces the way we are going. There’s no changing direction.”

The investment review might also determine whether the CEO can make VW’s conglomerate structure more nimble by focusing decision-making mainly on the VW, Audi and Porsche divisions. Over the past four years, the manufacturer has been reviewing options for noncore businesses and niche nameplates such as the Ducati motorcycle brand and Bugatti supercars.

Volkswagen is setting a high bar for the first electric vehicle it will build around the globe.

Volkswagen aims to double electric-vehicle sales in 2021, the CEO said, as the company seeks to meet increasingly stringent emission regulations in Europe and elsewhere, part of a broad-based political push to adapt to climate change.

“Governments play a huge a role” by setting policy to influence consumer choices, Diess said. “For many people, it will be very difficult to decide against an electric car.”

With an eye on the election in the U.S., he said his strategy probably better aligns with Democrats, though the company also has developed a “trustful” relationship with Donald Trump’s administration.

While incumbent automakers wrestle with overhauls of their legacy operations, Tesla has surged ahead to become the world’s most valuable car manufacturer, even as it generates far less cash and sells fewer vehicles than VW or Toyota Motor Corp.

That puts VW under pressure to keep pace with technology development, even as the pandemic roils the day-to-day business of making cars. At stake is what role Volkswagen will play in the future.

“Are we able to convert this exciting, precious device into a real internet device?” Diess said. “We’re confident, but there’s still a lot to do.”

Christoph Rauwald, Chad Thomas and Daniel Schaefer were the primary contributors to this report.