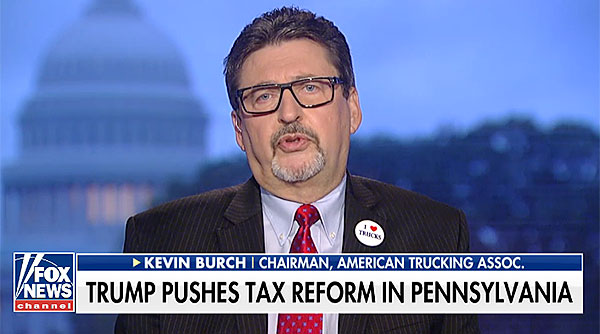 About 13 hours after President Donald Trump saluted ATA Chairman and Jet Express President Kevin Burch for his 40-plus years in trucking, Burch appeared on FOX News' "Fox & Friends" morning program Oct. 12, pointing out that the need for small-business tax reform shouldn't be a partisan issue.

"Freight shouldn't be a Democrat or Republican or Independent [issue]," Burch said. "We're all involved in this 24/7. As the economy grows, we're going to need to figure out a way to get the freight delivered on time."

Watch the full video interview above.

Burch and other trucking industry leaders were in Middletown, Pa., Oct. 11, where Trump touted his tax reform plan at an Air National Guard hangar before a crowd of about 1,000. At that event, Trump noted Burch's 40-plus years in trucking and then joked, "You don't look that old!"

Following the morning show appearance, Burch joined ATA President Chris Spear at the White House for Trump's signing of an executive order to rewrite federal regulations for association health plans, in which similar small businesses — which would include many trucking companies — would be able to form an association to broker health benefits.

Burch's one-year tenure as ATA chairman will expire when current First Vice Chairman Dave Manning, president of TCW Inc., is expected to be elevated to the top role at the 2017 Management & Conference Exhibition Oct. 21-24 in Orlando, Fla.