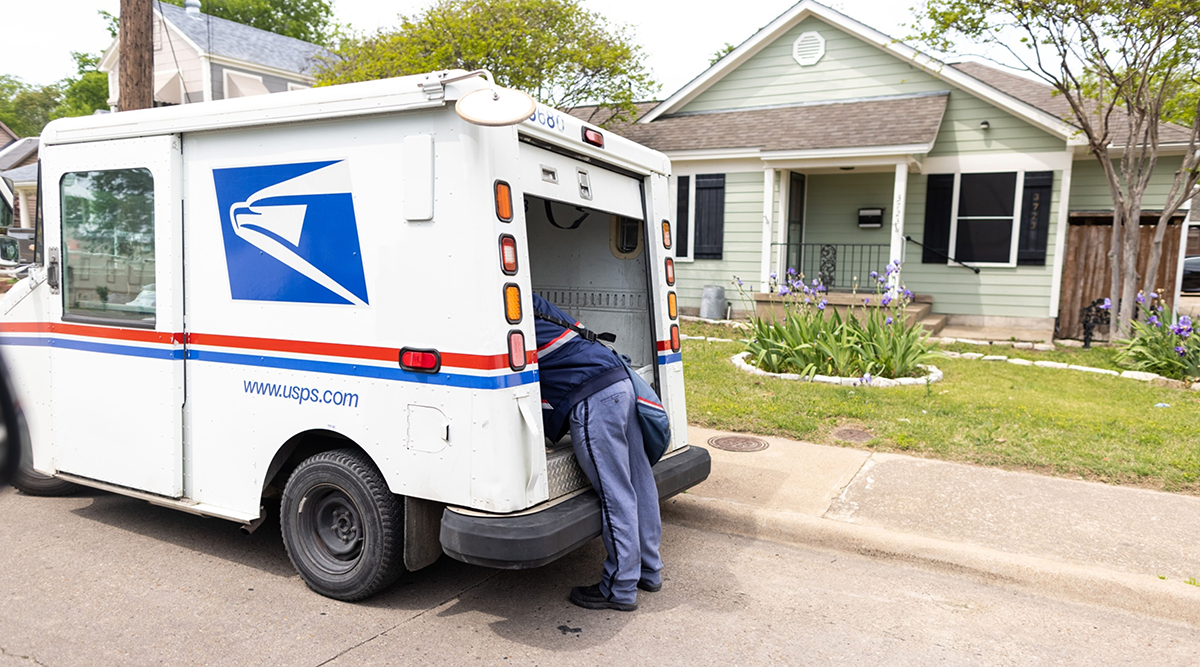 A U.S. Postal Service worker looks in the back of a delivery truck while delivering mail in Dallas. (Kathy Tran/Bloomberg News)

The U.S. Postal Service is making changes to its express shipping as of Oct. 1 that could delay some mail going across country.

The USPS says it hasn’t been able to hit its promised delivery targets for years — and these changes make those targets more attainable, cost-effective and realistic.

The new standards — part of USPS’ Delivering for America Strategic Plan — will increase “time in transit” windows for up to two days, holding up mail with longer delivery routes. The changes are set to delay first-class mail and periodicals.

On an information page about the changes, USPS stated that the updates “will improve service reliability and predictability” and were a “necessary step toward achieving our goal of consistently meeting 95% service performance.”

Approximately 61% of first-class mail and 93% of periodical delivery times will remain unaltered. Mail sent locally is unlikely to be impacted, according to a USPS press release.

USPS explained in a report that the standards — with first-class mail expected to arrive within three days — are “unattainable” due to changes in the market and standards “not based on delivery distances.”

The report additionally stated that USPS’ attempt to live up to the current standards produced an over-reliance on air travel, which the report added is more expensive than ground transportation. It further revealed that USPS has been unable to meet its published service standards over the past eight years.

“With these changes and others under the Delivering for America 10-year-plan, the Postal Service expects to meet or exceed its published delivery standards across all product classes 95% of the time, improving operational efficiency and precision, service reliability, and generation of efficiencies that help ensure affordable postage rates,” USPS stated in the report.

The changes were in part necessitated from the USPS’ staggering billions in losses over the years. In 2020, the postal service posted a $9.2 billion loss even though total revenues increased by $2 billion (to $73 billion). Package delivery increased sharply during the pandemic (18.8%), but first-class mail experienced a 4.2% decline, according to a February report in Forbes magazine.

Critics of the new standards worry that they might hurt mail recipients.

In a July letter, the Postal Regulatory Commission issued an opinion, writing “The Commission finds that the amount of estimated annual cost savings, even if fully realized, does not indicate much improvement, if any, to the Postal Service’s current financial condition...” the opinion stated.

“Therefore, it is not clear that the tradeoff between financial viability and maintaining high-quality service standards is reasonable.”

The longer delivery regulations are expected to delay mail going across the country or to Alaska, Hawaii or Puerto Rico.