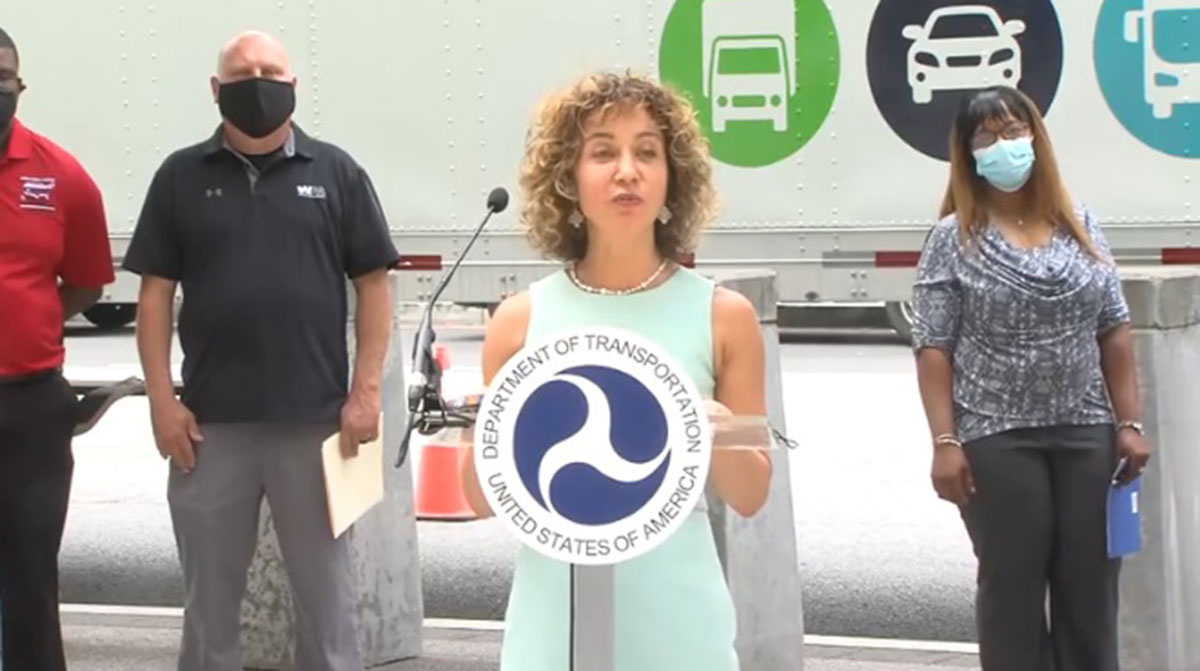 Truck drivers are key to ensuring the country’s economic prosperity and maintaining safety along the highways, top officials at the U.S. Department of Transportation said recently.

At an event at its headquarters Sept. 16, the department honored commercial drivers in recognition of National Truck Driver Appreciation Week.

“Truck drivers are the lifeblood of our economy. More than 3.5 million professional truck drivers haul 70% of the country’s freight,” said Carlos Monje, undersecretary of transportation for policy. “The essential nature of the work that truck drivers do everyday, often behind the scenes, is crucial to the nation’s economy, public health and roadway safety.”

“As we become more and more reliant on e-commerce, and through pandemic and climate crises, their critical role is even more evident,” she said. “Truck drivers, with their broad highway presence, set the tone for highway driving.”

Henry Bruster, an America’s Road Team captain and a professional driver with TForce Freight, was at the event.
“My love for trucks and the trucking industry began at a very early age,” Bruster said. “As a little boy, I always wanted to climb in the truck, talk to the driver and grow up to be one of those drivers I idolized as a young child.”

Happy #NTDAW21! A special thank you from @DanaInc_ and @ACT1trucking, NTDAW 2021's premier sponsor. There is no better time to thank the highway heroes that help keep our highways safe while moving America’s essential goods! #thankatrucker pic.twitter.com/kAsNetgnDg

Alongside Bruster was April Coolidge, also an America’s Road Team captain and a professional driver with Walmart Transportation.

National Truck Driver Appreciation Week, which was held Sept. 12-18, sought to amplify the industry’s role in safety, communities and the economy.

“This nation owes a tremendous amount to the men and women who drive our trucks,” noted American Trucking Associations President Chris Spear. “In times of crisis, they are among the first to respond. And when others stay home, we hit the road delivering the things this country needs to keep moving.

“National Truck Driver Appreciation Week is just a small gesture acknowledging the efforts of drivers like Henry and April, and we’re glad that DOT has taken time to recognize them and all of the 3.7 million professional drivers.”

“There are a lot of reasons we depend on truckers!” Thank you to the men and women who move America. This #NTDAW21 ATA, @GreatWestCC, and @ACT1trucking honor you! #ThankATrucker pic.twitter.com/XZTfesKq5u

“I call on every American to join ATA and me in honoring our drivers,” said ATA Chairman Sherri Garner Brumbaugh, CEO of Garner Trucking in Findlay, Ohio. “This year has a special meaning in recognizing these frontline heroes who have continued to deliver life’s essentials during the pandemic.”

This year has a special meaning in recognizing these frontline heroes.

Rep. Mike Bost (R-Ill.), a member of the U.S. House Transportation and Infrastructure Committee, took to social media to offer his sentiment: “This week is Truck Driver Appreciation Week! As a former truck driver myself, I want to thank all of the hardworking men and women who spend long hours driving over the road to ensure that store shelves are stocked.”

Via a message online, U.S. Sen. Rick Scott (R-Fla.), a member of the Commerce Committee, added, “In recognition of #NationalTruckDriverAppreciationWeek, I’m proud to honor our truck drivers in Florida and across the nation. My adopted father was a truck driver, and I saw firsthand how demanding these jobs are. To America’s truck drivers: Thank you for your hard work.”