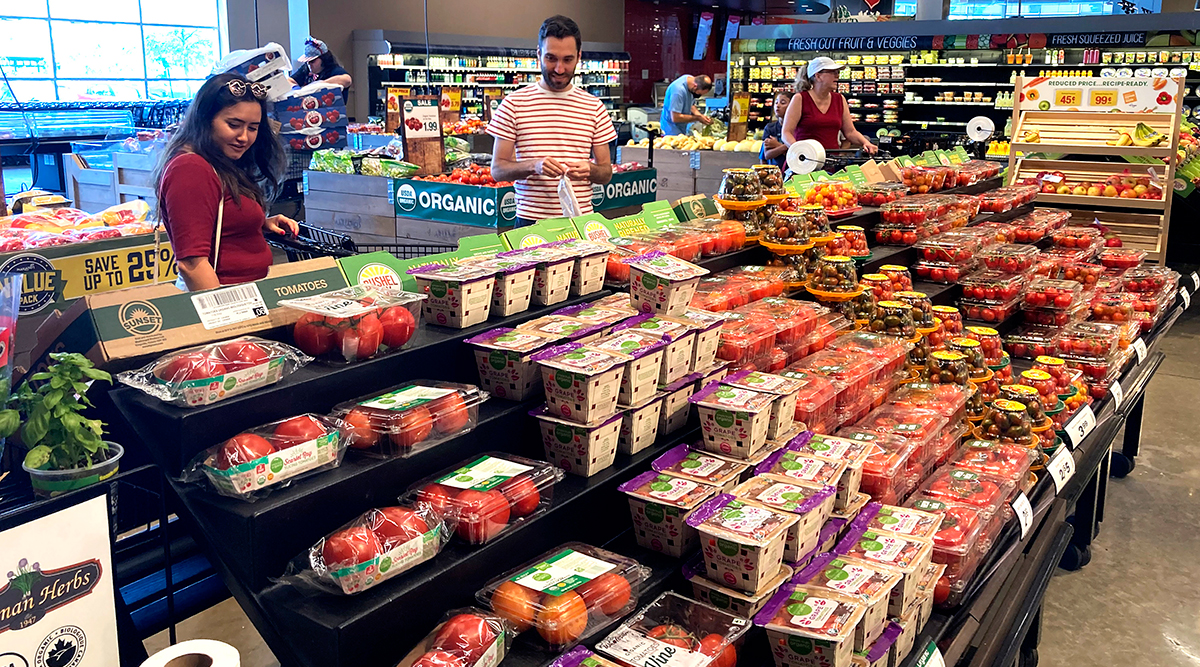 WASHINGTON — The U.S. economy grew at a 2.6% annual rate from July through September, snapping two straight quarters of contraction and overcoming high inflation and interest rates just as voting begins in midterm elections in which the economy’s health has emerged as a paramount issue.

Oct. 27’s better-than-expected estimate from the Commerce Department showed that the nation’s gross domestic product — the broadest gauge of economic output — grew in the third quarter after having shrunk in the first half of 2022. Stronger exports and consumer spending, backed by a healthy job market, helped restore growth to the world’s biggest economy at a time when worries about a possible recession are rising.

Consumer spending, which accounts for about 70% of U.S. economic activity, expanded at a 1.4% annual pace in the July-September quarter, down from a 2% rate from April through June. Last quarter’s growth got a major boost from exports, which shot up at an annual pace of 14.4%. Government spending also helped: It rose at a 2.4% annual pace, the first such increase since early last year, with sharply higher defense spending leading the way.

Housing investment, though, plunged at a 26% annual pace, hammered by surging mortgage rates as the Federal Reserve aggressively raises borrowing costs to combat chronic inflation. It was the sixth straight quarterly drop in residential investment.

Overall, the outlook for the overall economy has darkened. The Fed has raised interest rates five times this year and is set to do so again next week and in December. Chair Jerome Powell has warned that the Fed’s hikes will bring “pain” in the form of higher unemployment and possibly a recession.

“Looking ahead, risks are to the downside, to consumption in particular, as households continue to face challenges from high prices and likely slower job growth going forward,” Rubeela Farooqi, chief U.S. economist at High Frequency Economics, wrote in a research note. 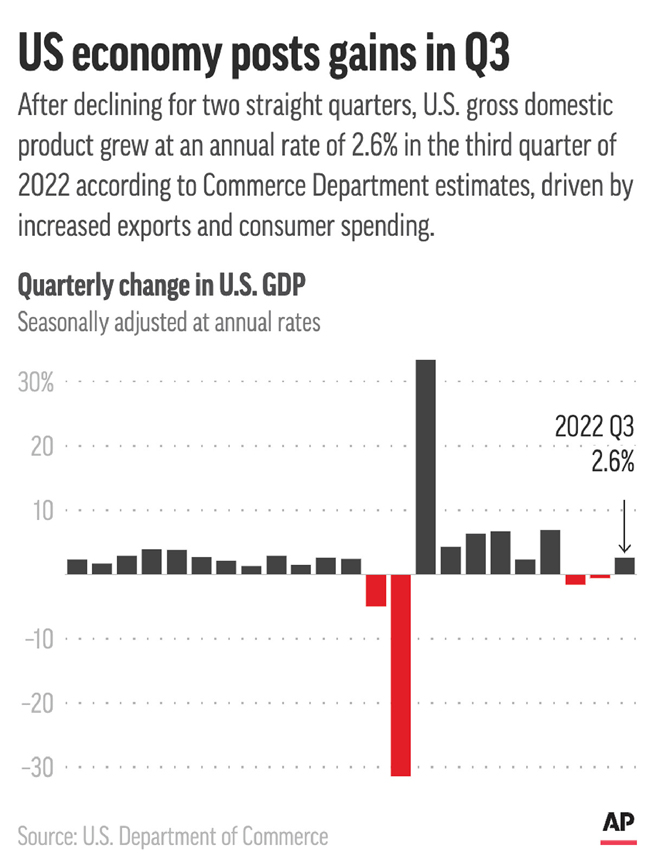 With inflation still near a 40-year high, steady price spikes have been pressuring households across the country. At the same time, rising loan rates have derailed the housing market and are likely to inflict broader damage over time. The outlook for the world economy, too, grows bleaker the longer that Russia’s war against Ukraine drags on.

The latest GDP report comes as Americans, worried about inflation and the risk of a recession, have begun to vote in elections that will determine whether President Joe Biden’s Democratic Party retains control of Congress. Inflation has become a signature issue for Republican attacks on the Democrats’ stewardship of the economy.

Economists noted that the third-quarter gain in GDP can be traced entirely to the surge in exports, which added 2.7 percentage points to the economy’s expansion. Export growth will be difficult to sustain as the global economy weakens and a strong U.S. dollar makes American products pricier in foreign markets.

The Oct. 27 report offered some encouraging news on inflation. A price index in the GDP data rose at a 4.1% annual rate from July through September, down from 9% in the April-June period — less than economists had expected and the smallest increase since the final three months of 2020. That figure could raise hopes that the Fed might decide it can soon slow its rate hikes.

Last quarter’s U.S. economic growth reversed annual declines of 1.6% from January through March and 0.6% from April through June. Consecutive quarters of declining economic output are one informal definition of a recession. But most economists have said they believe the economy skirted a recession, noting the still-resilient job market and steady spending by consumers. Most of them have expressed concern, though, that a recession is likely next year as the Fed steadily tightens credit.

Preston Caldwell, head of U.S. economics for the financial services firm Morningstar, noted that the economy’s contraction in the first half of the year was caused largely by factors that don’t reflect its underlying health and so “very likely did not constitute a genuine economic slowdown.” He pointed, for example, to a drop in business inventories, a cyclical event that tends to reverse itself over time.

Higher borrowing costs have weakened the home market, in particular. The average rate on a 30-year fixed-rate mortgage, just 3.14% a year ago, topped 7% this week for the first time since 2002, mortgage buyer Freddie Mac reported Oct. 27. Sales of existing homes have fallen for eight straight months. Construction of new homes is down nearly 8% from a year ago.

Still, the economy retains pockets of strength. One is the vitally important job market. Employers have added an average of 420,000 jobs a month this year, putting 2022 on track to be the second-best year for job creation (behind 2021) in Labor Department records going back to 1940. The unemployment rate was 3.5% last month, matching a half-century low.

Hiring has been decelerating, though. In September, the economy added 263,000 jobs — solid but the lowest total since April 2021.

International events are causing further concerns. Russia’s invasion of Ukraine has disrupted trade and raised prices of energy and food, creating a crisis for poor countries. The International Monetary Fund, citing the war, this month downgraded its outlook for the world economy in 2023.

While the U.S. economy expanded, the European Central Bank predicted weakening growth in the 19 countries that use the euro currency the rest of this year and next, pointing to the uncertainty of Russia’s war in Ukraine that could keep food and energy prices high. While ECB President Christine Lagarde said the likelihood of recession had increased, the central bank on Thursday still announced its second big interest rate hike in a row to target inflation running at 9.9%.