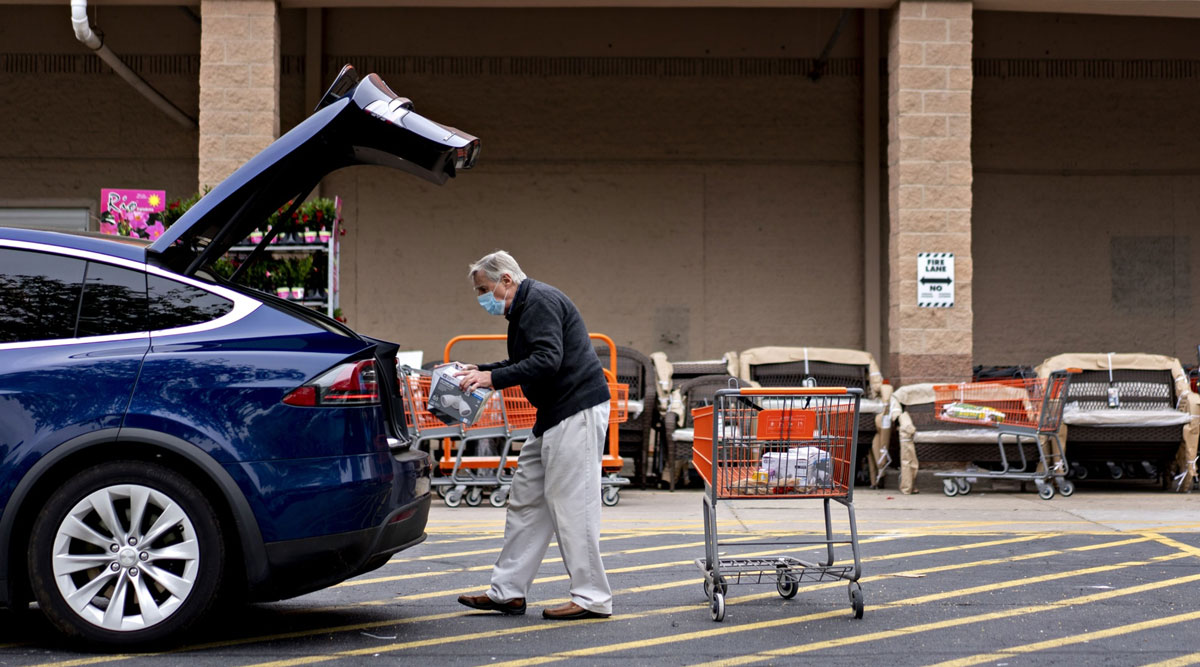 A customer wears a protective mask while loading purchases from a Home Depot store in Reston, Virginia, on May 21. (Andrew Harrer/Bloomberg News)

U.S. consumer spending, which accounts for about two-thirds of the world’s largest economy, plunged in April by the most on record after the coronavirus pandemic halted purchases of all but the most essential goods and services.

Household outlays fell 13.6% from the prior month, the sharpest drop in Commerce Department records back to 1959, data showed May 29. The median estimate in a Bloomberg survey of economists called for a 12.8% decline.

Incomes posted a record 10.5% increase, compared with estimates for a 5.9% decline, as federal stimulus payments were distributed under the CARES Act, the report said. It showed government social benefits rose by $3 trillion in April, up from a $70.2 billion gain the prior month.

Consumer spending dried up in April as Americans focused on essentials. 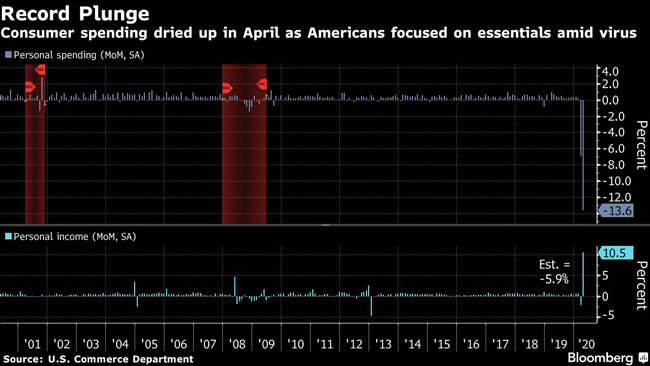 U.S. stocks were mixed May 29 after the report as investors weighed the decline in American consumer spending and awaited President Donald Trump’s latest response in his escalating feud with China. The yield on 10-year Treasuries sank.

With the drop in spending, the personal savings rate jumped to a record 33% from 12.7%.

The Federal Reserve’s preferred gauge of consumer prices rose 0.5% from a year earlier, the slowest pace since 1961 and far below the central bank’s 2% target. The core price index, which excludes more volatile food and energy costs, advanced 1%, the least since 2011.

While the income replacement is helping consumers slowly return to traveling and eating out, economists expect it will take at least a year before spending recovers to pre-virus levels — especially with no vaccine or significant treatment yet in sight for a disease that’s killed more than 100,000 Americans, the highest official toll in the world.

In a contrast with the headline income number, wages and salaries fell 8% from the prior month amid widespread job losses, reductions in hours and pay cuts. The income category of personal current transfer receipts surged 89.6%.

A separate report May 29 showed U.S. merchandise trade in April slumped to the lowest level in a decade as the pandemic curtailed demand and disrupted supply lines.

After adjusting for inflation, spending fell by 13.2% in April, also the most ever, supporting forecasts for gross domestic product to shrink by a record in the April-June period. The main drivers of the monthly decline were spending on food and beverages, restaurants, hotels and health care.