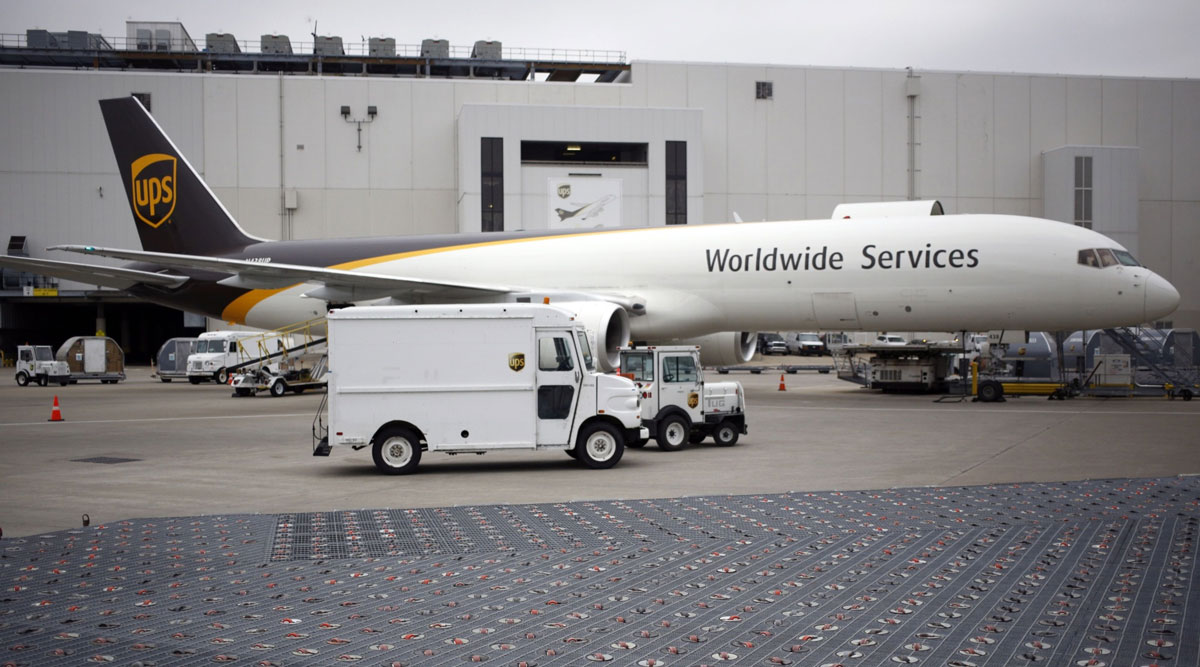 A delivery van passes in front of a cargo jet parked on the tarmac at a UPS Worldport facility in Louisville, Ky., on Jan. 28. (Luke Sharrett/Bloomberg News)

The Gary/Chicago International Airport Authority on May 13 approved a long-term lease and easement access agreement with UPS Inc. that will allow the company to begin express air shipment operations later this year.

UPS expects to begin operations in advance of the holiday shopping season, with weeknight flights from Gary, Ind., to the UPS hub in Louisville, Ky., and return flights the following morning. The flights will carry packages for UPS’ Next Day Air service.

“UPS expanding its services to GCIA provides the airport with a critical competitive advantage and solidifies its role as the Chicago region’s third regional airport,” Authority Chairman Timothy Fesko said. “This is the latest private sector investment bolstering our operations capability and allows the airport to provide critical benefits to the Chicago metropolitan area and northwest Indiana.”

The agreement includes 14,000 square feet of office space in the airport’s passenger terminal and a 150,000-square-foot ramp with space to park two Airbus A300s.

“The Gary/Chicago International Airport is well-positioned to add additional capacity and flexibility to the UPS network, helping businesses in northern Indiana and the Chicago area compete at e-commerce’s fast pace as they serve their customers,” UPS Airlines President Brendan Canavan said.

“This agreement represents a new era for the Gary/Chicago International Airport and is a real game changer for airport operations moving forward,” GCIA Executive Director Duane Hayden said. “Over the past several years, the airport has witnessed continued private and public investments to get us to this moment, and we could not be more pleased.”

The Airbus A300 is a wide-body cargo jet with a maximum payload of more than 120,000 pounds and the ability to carry more than 14,000 Next Day Air Packages. The weeknight departures will carry thousands of packages to UPS’ global air hub in Louisville for sorting. The morning arrivals will bring packages for regional delivery later that day. The company’s Next Day Air volume grew by 20.5% in the first quarter of 2020, its fourth consecutive quarter of double-digit increases.

“The airport is an important economic engine for the region, and continued investments at the airport lead to increasing opportunities for Gary residents,” Prince said. “We look forward to the formal ribbon-cutting to properly celebrate this important achievement.”

Plans call for that ceremony to be held when the public health situation allows.

The UPS lease has a five-year term, with two five-year extensions.

UPS will construct office space in the former passenger terminal and create a modular facility, or MDC, for the sorting of packages. The company also will have equipment for loading and unloading cargo containers.

UPS expects to have 60 employees at the airport, including ground handlers, administrators, aircraft maintenance technicians and management employees. It will bring in current employees and make new hires. Hiring will begin later this year.