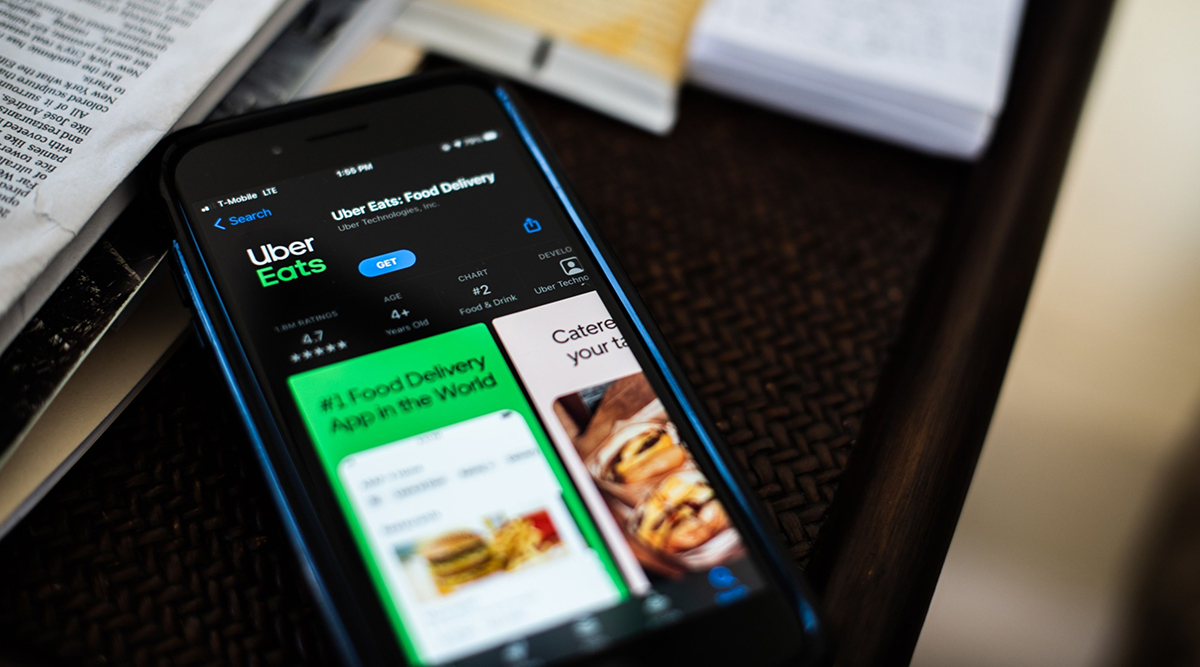 The Uber Eats application on a smartphone. (Tiffany Hagler-Geard/Bloomberg News)

Another quarter passed, and Uber Technologies Inc. is a little further from its goal of posting an adjusted profit by the end of the year.

The second-quarter results showed a wider loss before interest, tax and other expenses than the prior period, a surprising slip that sent the stock down as much as 9.4% in extended trading Aug. 4.

The loss was especially unexpected because Uber’s main competitor in the U.S., Lyft Inc., reported its first adjusted profit the day before — and ahead of schedule. The divergence highlights how different the two rivals have become.

Lyft benefited from a lifting of COVID-19 restrictions in many U.S. cities as vaccinations ramped up early in the summer, driving a surge in ride-hailing use. Uber did, too, but its sprawling business operates in many more countries and offers many other services besides rides. Those aspects were not nearly as profitable.

Both Uber and Lyft increased spending last quarter on recruiting drivers who had left earlier in the pandemic. Uber Chief Executive Officer Dara Khosrowshahi said the efforts worked. The number of people working each month increased by 420,000 from February to July. Unlike Lyft, Uber expects to significantly decrease those incentives in the coming months.

Uber said it will narrow its adjusted loss to less than $100 million in the third quarter while increasing gross bookings. A big caveat is the delta variant of the coronavirus. Khosrowshahi reassured analysts and investors on a conference call Aug. 4 that a fourth-quarter adjusted profit was still in reach.

A resurgence of the virus in the U.S. would be acutely bad for Lyft, though. With the delta variant spreading, Lyft said it would continue to spend on driver bonuses and gave a weaker-than-predicted sales forecast for the third quarter that sent shares tumbling.

The future for Uber would be harder to predict. Khosrowshahi downplayed the threat of the delta variant and said gross bookings actually increased between June and July, with customers in New York City, London and Paris spending 30% more last month than they did in July 2019.

“We have confidence in our ability to manage through any scenario just as we’ve done over the past 500-plus days,” he said.

In an interview on Bloomberg TV, Khosrowshahi opposed a vaccine mandate for drivers and customers, placing the onus on governments to make such a rule. He expects an influx of drivers to return in the fall but acknowledged that the delta variant creates an unpredictable variable, he said in the interview Aug. 5: “As far as the delta goes, it’s difficult to tell what the effect is.”

— With assistance from Isabella Simonetti and Emily Chang.