This story appears in the Jan. 11 print edition of iTECH, a supplement to Transport Topics.

The emergence of wearable technology, such as smartwatches, has given consumers a new way to communicate, track their health and process payments, but some fleets and technology suppliers believe these devices also can serve as valuable tools in trucking operations.

Wearable technologies can relay information to drivers without distracting them from the road ahead, detect and prevent fatigue and even enable them to monitor physiological data such as heart rate. 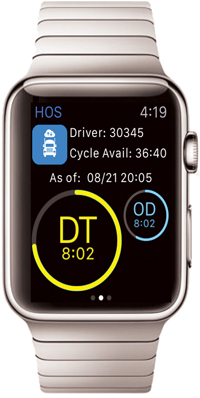 It remains to be seen how much the nascent market for wearables will grow. However, a number of trucking suppliers are making early investments in the technology, with some developing applications for consumer smartwatches and others offering headsets and even articles of clothing outfitted with sensors.

PeopleNet, for one, is developing software for the Apple Watch.

That software will take advantage of the smartwatch’s “haptic” feedback capability, which can alert the driver to a new dispatch or message by giving him or her a “tap” on the wrist.

By using an alert that doesn’t depend on the eyes, or even the ears, to get the driver’s attention, the technology avoids the potential distraction that would be caused if it forced drivers to divert their gaze, said Randy Boyles, senior vice president of mobile strategy at PeopleNet, which is part of Trimble.

The watch also can tap the driver’s wrist when he or she surpasses a set speed limit or improve navigation by providing a tap when the next turn is within a quarter-mile, for example.

“You can get data to the driver in a nonobtrusive way,” Boyles said. “If I’m using a phone, I have a tendency to want to look at that phone and see how much farther down the road I’m turning. With the watch, it’s just going to tap me to say, ‘Here’s the turn.’ ”

The face of the watch also can be set to display key work information — such as the driver’s remaining hours of service — so it is available at a glance.

“I can show them that on the face of the watch,” Boyles said. “They don’t have to do anything more than raise the watch up and look at it.”

The watch has a heart rate sensor as well, opening the possibility of driver health-related features.

PeopleNet’s software for Apple Watch will be part of the company’s recently introduced ConnectedDriver suite of productivity applications for drivers’ personal devices, which also includes support for Apple and Android smartphones.

Another technology supplier, Telogis, also recently announced a suite of mobile apps designed to work with Apple products, including the Apple Watch.

The company’s Telogis Coach app, for example, scores drivers based on their driving behavior and safety and productivity metrics.

“We recognize that wearables are new for the consumer market, and they’re even that much newer for the commercial worker market, so we know we’re a little far out front and we have to see how the market looks at these things,” said Kelly Frey, Telogis’ vice president of product marketing.

Driver acceptance of wearable technology also is a concern.

“Based on my experience, truck drivers tend to be fairly suspect of technology to begin with,” Frey said. “They’re always kind of questioning, ‘Is this thing meant to get me in trouble? Is this going to help me? Is this going to hurt me?’” He added that developers and potential users will have to sell the technology to drivers as tools to improve their jobs and lives.

Biometric data, for example, could be used to help drivers with sleep apnea monitor their rest.

“We don’t want people to think the biometric information is going to be used for punitive reasons, so we want to present this as an opportunity to help a worker,” Frey said.

Apart from consumer smartwatches, some industry suppliers have developed technology that can be worn on the head.

Maven Machines Inc. offers headsets equipped with sensors that monitor the wearer for signs of fatigue or distraction.

This “hearable” technology, known as the Maven Co-Pilot, generates an alert when it detects that the driver is nodding off.

The company said its system uses algorithms to detect the difference between normal mirror checking and instances of microsleep, or “head-bobs.”

“What the technology allows us to do is monitor the driver by sensing fatigue and distraction in real time and alerting the driver in real time,” Maven CEO Avishai Geller said. “The data is also available on our data platform and available to dispatchers and safety managers as well.”

That data management is a key feature for PGT Trucking, a flatbed and specialized fleet that is testing the Maven headsets.

“The headset will alert the driver, but we will also be alerted,” PGT President Gregg Troian said. “A record of these movements is being recorded so we can look at habits over a period of time.”

PGT, based in Monaca, Pennsylvania, operates a fleet of more than 1,000 trucks.

Wearable technology also is expanding to articles of clothing.

When the driver shows signs of nodding off, the product generates an audible and visual alarm from an in-cab display and also can relay the information to dispatch, said Daniel Bongers, the company’s chief technology officer.

In the coming months, the company plans to add the option of using an Apple or Android smartphone for the product display, he added.

Meanwhile, Montreal-based OMSignal has developed a line of “biometric smartwear” that looks like a shirt but is equipped with sensors that monitor extensive information about the driver’s physiology to support fitness goals and health monitoring.

It collects information on the wearer’s heart rate, breathing rate and the expansion and contraction of the chest. The box also features an accelerometer that tracks body positioning.

“We believe these indicators, when they’re combined, have the potential to foretell problems,” Mackey said.