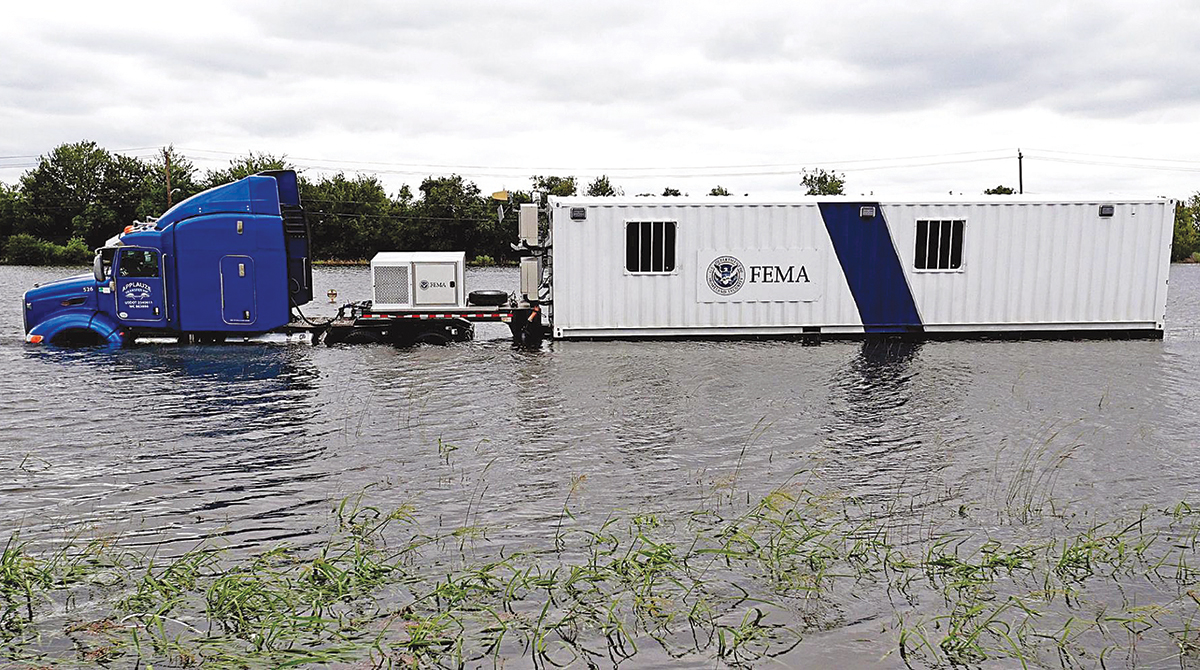 A FEMA truck sits in floodwaters on the Beltway 8 feeder road in Houston on August 30, 2017, as the fourth largest city in the US battles with tropical storm Harvey and resulting floods. Thomas B. Shea/Getty Images

Winston Mullings jumped into action after Hurricane Harvey to deliver to those in need, but the unimaginable happened in Houston: Floodwaters overpowered his truck on a major highway.

Applauze Transfer, based in Stone Mountain, Ga., operates two trucks, one for Mullings and the other for his son. The Federal Emergency Management Agency hired Mullings to haul a generator and trailer from Louisiana to Beeville, Texas, about an hour northwest of Corpus Christi.

He was driving on Sam Houston Parkway near Black Hawk Boulevard going toward the Southwest Freeway late at night Aug. 28 when disaster struck.

“The water was at least 3 feet high. In front of me a large bus was turned around, then I saw a Ford pickup floating backwards towards me and I realized, ‘Oh no, this is very serious,’ ” Mullings told Transport Topics. “I tried to back up, but there was no traction. So I blew the horn because there were cops nearby and they got some guy to rescue me on a boat around 1:30 in the morning.”

RELATED: Trucks, planes and tankers putting Houston back in business after Hurricane Harvey

His truck actually was traveling off the shoulder on the right side when he converged on the deluge, but he didn’t know because water had crested the Jersey walls, wiping out any frame of reference on the roadway.

For three days, he took residence at a Red Cross shelter in Houston while his truck remained floating on the highway. A tow truck finally came Sept. 1 to take his truck and FEMA supplies to a yard.

“The truck was a complete loss. The critical components were underwater for more than three days. I’ll have to file with insurance or talk to my broker because someone is going to have to pay to replace the truck. I’m not leaving Texas until that question is settled,” Mullings said.

Before heading through Houston, he took bottled water from the FEMA building in Atlanta to the National Guard in Pineville, La. in a dry van trailer. While he wouldn’t disclose exactly how much he was paid on the two trips, he received between $3 and $5 per mile one-way versus the typical $2-per-mile rate. Mullings also received offers in the hours after the storm to pay him more than $8 per mile to Houston.

Nevertheless, he realizes that what happened to him Aug. 28 was minor compared with the wreckage Harvey left for those living across South Texas.

“Their lives are ruined right now,” Mullings said. “The damage is horrible, and I feel very bad for the people who lost their homes and everything they own.”