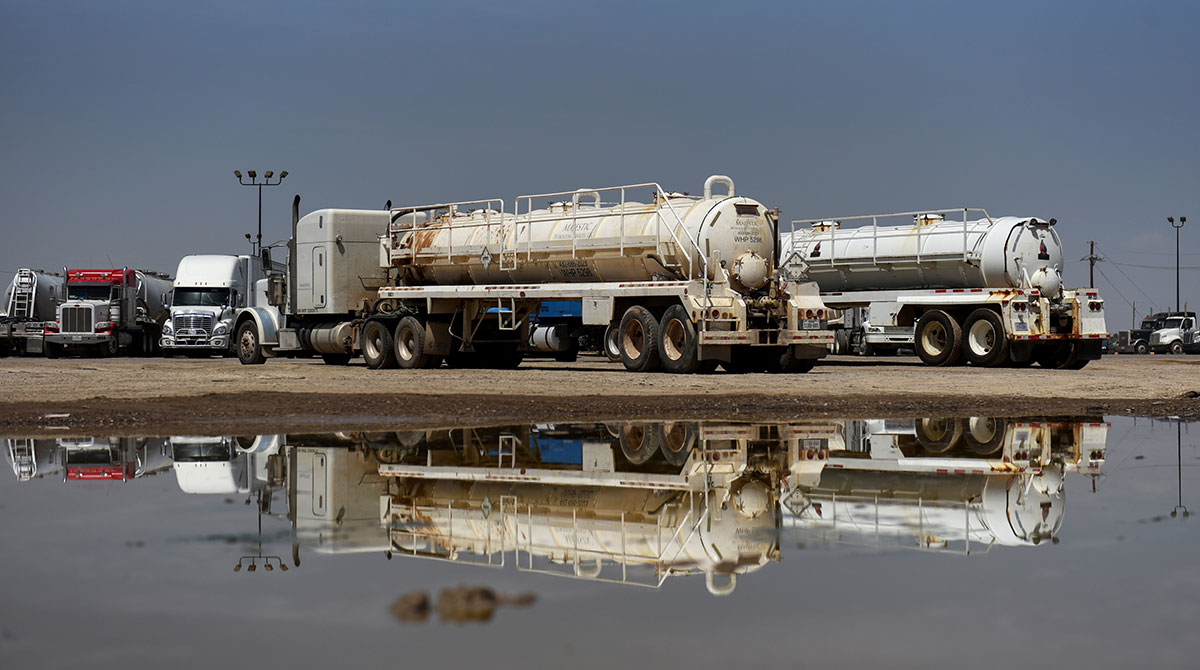 Trucks parked near Pecos, Texas. Thousands of drivers are needed in the Texas oil fields. The driver shortage is pinching the production boom there. (Callaghan O'Hare/Bloomberg News)

They could be hauling the thousands of loads of sand needed to frac a well. But there aren’t enough drivers. It will take longer to complete the well.

Once it’s out, the oil has to get to a plant on the Gulf Coast, and that means more trucks commanding higher prices, with more delays amid the driver shortage.

The plastics from those plants have to get to the Port of Houston for their voyage overseas. And when they come back in the form of packaging, clothes, auto parts and a range of other consumer products, they will need another trip down the highway to get to market.

In short, everyone will pay more for almost everything. Nationwide, longhaul truck shipping rates were 10% higher in July year-over-year, excluding fuel costs, according to Cass Information Systems, which tracks freight transactions.

This is how a shortage of tens of thousands of truck drivers gains a grip on the growing American economy. It throttles the Texas shale fields and tacks on costs to products traveling through the Port of Houston. It’s one reason why Amazon.com just hiked prices for Prime, its membership that includes free two-day shipping for many products.

And it’s why, this Labor Day, the freight industry is scrambling to address a workforce crisis.

The country is short more than 50,000 tractor-trailer drivers, a number expected to swell to more than 174,000 in eight years, according to American Trucking Associations. Expand that to the entire Class 8 truck market, which includes other heavy trucks, and the shortage was more than 270,000 in the second quarter of 2018, according to FTR Transportation Intelligence.

The shortage has been worsening for a lot of reasons: Pay hasn’t kept up with inflation, government regulations have reduced productivity and frustrated some drivers, the workforce is rapidly retiring and younger generations aren’t drawn to a lonely job that can require weeks or months on the road. Self-driving trucks are years away from relieving the crunch.

Through 2016, the economic recession masked the effects of the driver shortages, which are a decades-old problem. But demand surged in 2017, and a July report from the Federal Reserve, based on interviews with businesses nationwide, suggested diminished trucking capacity is constraining overall economic growth.

In South Texas’ Eagle Ford Shale and the West Texas Permian Basin, drillers use thousands of truckloads of sand to prop open rock formations in a single well. They are using more sand per foot of well to increase efficiency, and they are drilling longer wells. In the United States overall, drillers are using 75% more sand than a year ago, up to 14 million tons in the fourth quarter of 2017, according to BP Capital Fund Advisors.

It takes hundreds of trucks per well just to get the sand, plus up to 60 per day to dispose of water, and more to deliver oil to Gulf Coast hubs. The driver shortage has BP Capital portfolio manager Trip Rodgers predicting U.S. shale production growth in upcoming years at a rate of 600,000 to 900,000 barrels a day, compared with the 1 to 1.5 million expected by some analysts.

“It’s throughout the whole production process that the shortage of truck drivers is affecting oil production,” Rodgers said.

That includes moving product from the well site. Amid a pipeline crunch in the Permian Basin, exploration and production companies are holding onto trucks after jobs are done — and therefore paying more for them — because they worry they won’t have enough for the next job, said Scott Mellman, vice president of Dallas-based Stevens Tanker Division, which provides oil field trucks in four states. It’s reducing overall activity, he said.

“There’s no point in spending money to complete wells when you can’t get that well online because there’s no one to haul the product away,” he said.

Meanwhile, Port Houston facilities reached a record high in the shipping container business in 2017. Up to 7,000 trucks run through its terminals daily, and it has extended gate times for trucks and enacted other measure to try to reduce turnaround times for truckers, port spokeswoman Lisa Ashley said.

Billions of dollars of investment in plastic resin production along the ship channel will further boost demand for trucks in Houston.

And area developers are so confident in the growth of e-commerce that they’re building warehouses speculatively, without commitments from tenants. In the past 12 months, developers have broken ground on 8 million square feet of distribution space in Houston. All of those new docks will need trucks to serve them.

The driver shortage “is going to get worse before it gets better,” Esparza said. “There’s not a single one of my motor carriers ... that don’t have trucks parked or aren’t looking for drivers on a regular basis.”

While shipping costs are up, driver pay for longhaulers rose less than 1% in the past year, federal data shows. The median wage is about $42,000 a year, according to the Labor Department. Experienced drivers for private carriers can push $90,000.

Drivers have found that new federal safety requirements for reducing operator fatigue with electronic driving logs are eating into their profits.

The days of skirting rules or fudging logs are gone; the electronic monitor runs as long as the driver is behind the wheel, even if the truck isn’t moving. A driver who spends four hours waiting for a warehouse to load the truck only has seven more hours of drive time available in a 14-hour period. That means more trucks needed to haul the same amount of goods.

“Once they put the clock on you, you’re chasing the clock as soon as you get behind the wheel,” said Jill Cummings, a longhauler from Tennessee who was collecting freight at the Port of Houston’s Barbours Cut container terminal Aug. 28. “Every mile you run is money.”

She spends most of the year crisscrossing the country with her husband — one sleeps while the other drives — bringing in about $2,000 a week. But they start out each week $1,000 in the hole on insurance and maintenance, leaving only $1,000 after expenses.

The new federal rules are part of a move away from the deregulation of the industry in its 1970s heyday, when films such as “Smokey and the Bandit” romanticized the job.

“It’s tough to recruit the younger generation,” TTA’s Esparza said. “Maybe trucking’s not as sexy as it used to be.”

The industry will need to hire 90,000 new drivers per year over the next decade, with half of those needed to replace retiring drivers.

To attract millennials, it will have to show that the trucker lifestyle is changing.

Cummings contemplated this as she walked her dog, a pink-collared miniature pinscher named Chaos, around a truck stop parking lot near the port.

“Younger people have no business being out there,” she said. “I’m 49, and it’s still really hard.”

She started five years ago to help put her 22-year-old twins through college. Her husband, a Navy veteran, has been on the road 16 years. His previous wife, also a veteran, died of cancer. He keeps her military burial flag neatly folded on the dash of their rig. The front grill bears a light-up cross.

Cummings can’t fathom one of her children trying to support a spouse through something like that, away from home weeks or months at a time on roads she feels are increasingly dangerous.

The industry is looking to several solutions to boost recruiting, especially among the young, women and minorities. That means higher pay, but also respect, said Brian Fielkow, CEO of Jetco Delivery in Houston.

Jetco tries to distribute work to drivers based on their life situations. Fielkow said he looks for local and regional jobs for drivers who are single parents, while saving longer hauls for those who don’t mind weeks on the road.

The industry is pushing for rules that would make it easier for veterans to transfer their military experience to commercial truck driving, advocating for better treatment of drivers at warehouses and other parts of the supply chain.

TTA’s Esparza is optimistic that the industry will solve the fundamental recruiting issues in the long term.

“You will naturally get organic growth in drivers as the pay rate continues to increase,” he said.

“Freight will find a way to get from point A to point B,” he said. “You and I are going to be paying more.”