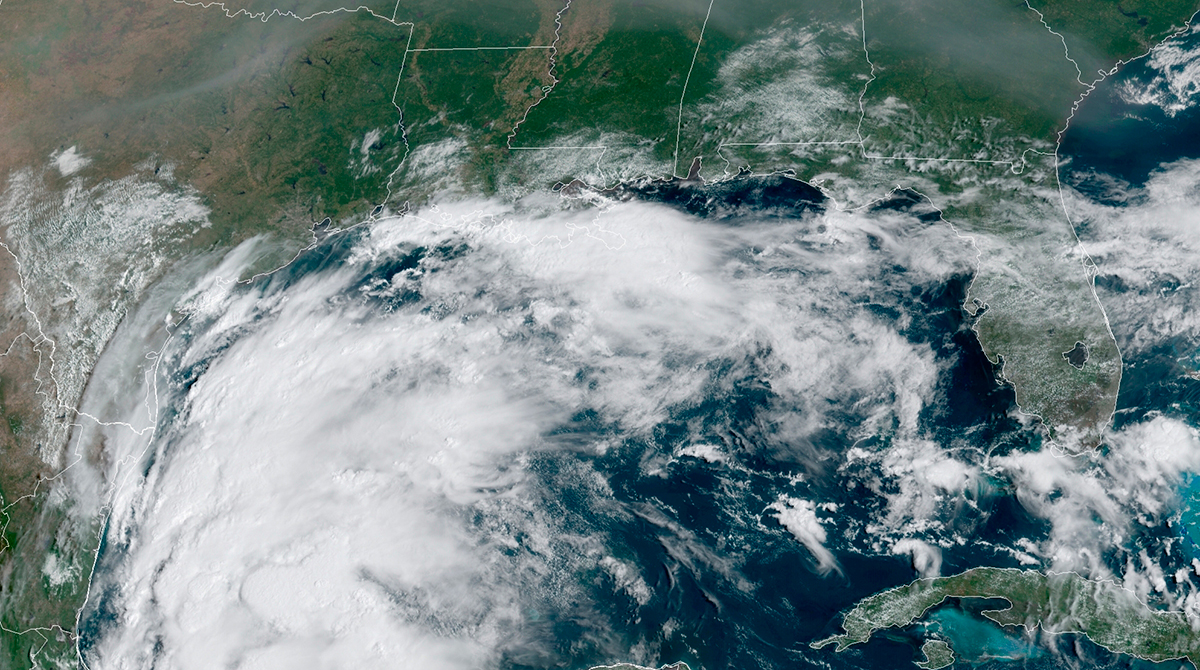 This satellite image provided by NOAA shows Tropical Storm Nicholas in the Gulf of Mexico on Sept. 12. (NOAA via Associated Press))

HOUSTON — Tropical Storm Nicholas gathered strength Sept. 13 and threatened to blow ashore in Texas as a hurricane that could bring up to 20 inches of rain to parts of the Gulf Coast, including the same area hit by Hurricane Harvey in 2017 and storm-battered Louisiana.

Although the system was expected to generate only a fraction as much rain as Harvey, nearly all of the state’s coastline was under a tropical storm warning that included potential flash floods and urban flooding. Texas Gov. Greg Abbott said authorities placed rescue teams and resources in the Houston area and along the coast.

Forecasters at the National Hurricane Center in Miami said the system’s top sustained winds reached 65 mph, an increase of 5 mph from earlier in the day. If the winds hit 74 mph, the storm would become a Category 1 hurricane. It was moving northeast at 12 mph and was predicted to make landfall in the evening along the central Texas coast.

At least 10 vessels set to load crude from Texas ports appeared to be fleeing deeper into the Gulf of Mexico with their storage tanks empty as the storm neared, ship tracking data compiled by Bloomberg show. 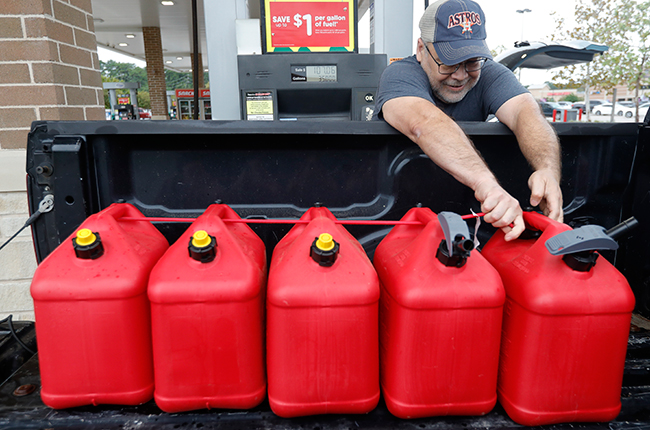 “This city is very resilient. We know what we need to do. We know about preparing,” said Turner, referencing four major flood events that have hit the Houston area in recent years, including devastating damage from Harvey, which flooded more than 150,000 homes in the Houston area.

Turner and Harris County Judge Lina Hidalgo asked residents to stay off the roads to avoid risking their lives or the lives of first-responders who might be called to rescue them from flooded roadways.

“What I need each resident to do is get where you need to be by 6 p.m. and stay there,” said Hidalgo, the top elected official in Harris County, which includes Houston.

The Houston school district, the state’s largest, announced that classes would be canceled Sept. 14 because of the incoming storm. The weather threat also closed multiple COVID-19 testing and vaccination sites in the Houston and Corpus Christi areas, and forced the cancellation of a Harry Styles concert scheduled for the evening in Houston.

As of the afternoon, Nicholas was centered roughly 70 miles south of Port O’Connor, Texas, and 85 miles southwest of Matagorda, Texas. A hurricane watch was issued from Port Aransas to San Luis Pass.

With flash flood watches in effect (green outlines) and heavy rain moving onshore, we’re in a critical 48-60hr period with #Nicholas. Flash flooding looks likely for many in the watch. Monitor the weather and never drive into floodwaters.https://t.co/VyWINDk3xP for the latest. pic.twitter.com/EbDT6ChY16 — National Weather Service (@NWS) September 13, 2021

Six to 12 inches of rain were expected along the middle and upper Texas coast, with isolated maximum amounts of 18 inches possible. Other parts of southeast Texas and south-central Louisiana and southern Mississippi could see 4 to 8 inches over the coming days.

“Listen to local weather alerts and heed local advisories about the right and safe thing to do, and you’ll make it through this storm just like you have many other storms,” Abbott said during a news conference in Houston.

Nicholas was headed toward the same area of Texas that was hit hard by Harvey. That storm made landfall, then stalled for four days, dropping more than 60 inches of rain in parts of southeast Texas. Harvey was blamed for at least 68 deaths, including 36 in the Houston area.

After Harvey, voters approved the issuance of $2.5 billion in bonds to fund flood-control projects, including the widening of bayous. The 181 projects designed to mitigate damage from future storms are at different stages of completion.

Louisiana Gov. John Bel Edwards declared a state of emergency, ahead of the storm’s arrival in a state still recovering from Hurricane Ida and last year’s Hurricane Laura and historic flooding. The system was expected to bring the heaviest rainfall west of where Ida slammed into Louisiana two weeks ago.

Across Louisiana, almost 120,000 customers remained without power Monday morning, according to the utility tracking site poweroutage.us.