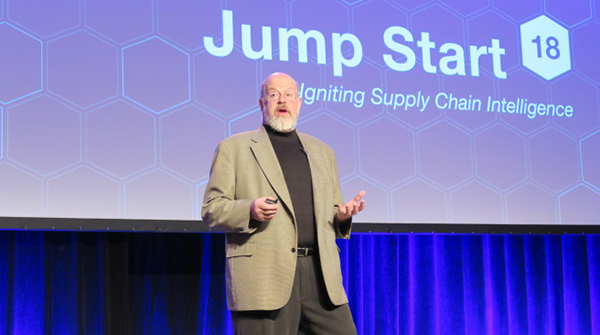 ATLANTA — In an era when technology is transforming many industries, companies must foster innovation to keep up with the pace of change, entrepreneur Terry Jones said in a speech to transportation leaders.

Jones helped revolutionize the travel business as the founder of Travelocity.com and Kayak.com, the latter of which was purchased by Priceline.com for $1.8 billion.

Much like travel, many other industries are being disrupted by the power of the internet, data analytics and artificial intelligence, Jones said here Jan. 22 in a keynote address at SMC³’s annual Jump Start conference.

You call it a disruption because you didn’t do it. If you did it, it would be an innovation.

What these companies do own, he said, is “the edge.”

“These companies are drop dead easy,” Jones said. “There’s a slogan in Silicon Valley: Step one, install software. There is no step two. That’s it. That’s how easy you have to be.”

“Don’t let some kid in Silicon Valley come eat your business,” he added. “Figure out how to own the assets, and the edge.”

In the end, disruption and innovation are just two sides of the same coin, Jones said. “You call it a disruption because you didn’t do it. If you did it, it would be an innovation.”

The challenge for established companies, Jones said, is shepherding an innovative idea all the way through the “pinball machine” of objections raised by marketing, IT, manufacturing, service and, finally, finance and legal. For an idea to survive that gantlet, business leaders must have a clear vision of the desired goal and an unwavering focus on getting there, he said.

Leaders can create fertile ground for innovation by hiring the right mix of employees, he added. “The engine of innovation rests on twin pillars — the pillar of culture and the pillar of team.”

Jones encouraged executives to bring in outsiders with fresh perspectives and zeal for change, even if they lack industry knowledge. Those workers can complement industry insiders who have domain expertise but tend to resist new ways of doing things.

“Mix it up,” Jones said. “Hire people who will confront you, who will argue with you, who don’t share your perspective.”

Good ideas often come from rank-and-file workers rather than top executives, he added.

“If you come together, you have more collective intelligence than any startup,” Jones said.