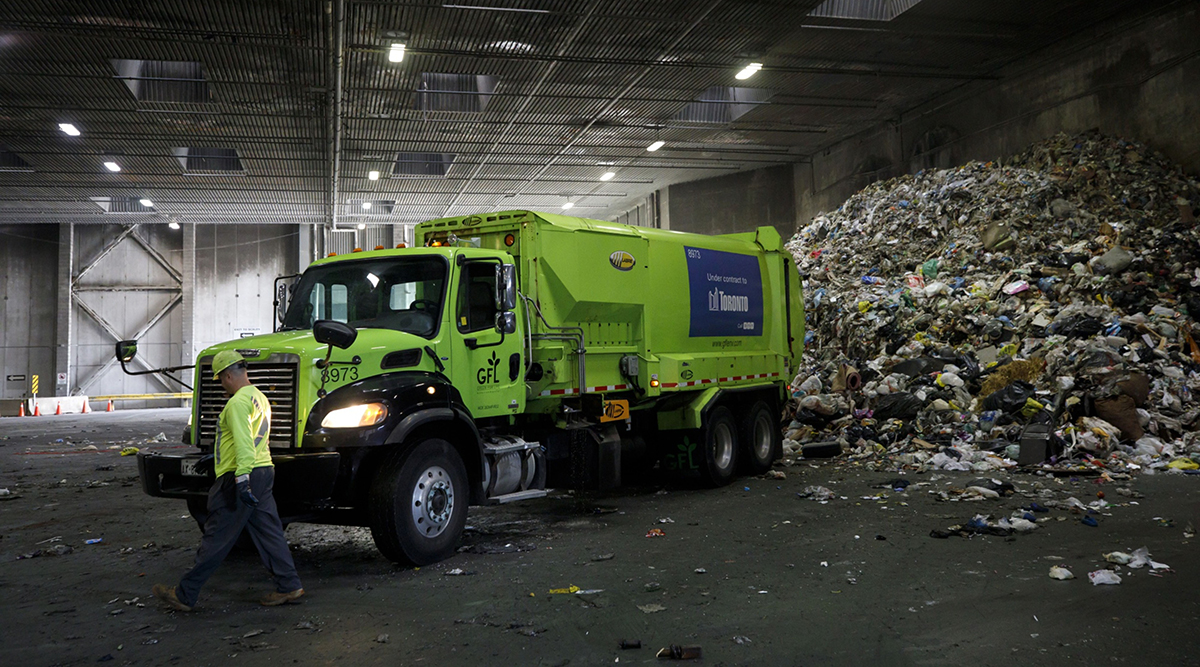 A GFL Environmental garbage truck prepares to drop off a load of waste at a transfer station in Toronto on Oct. 24, 2019. (Cole Burston/Bloomberg News)

Shares of North America’s fourth-biggest waste hauler fell 12% to $16.80 in New York from its IPO price of $19, giving it a market value of $5.4 billion. GFL sold 75 million shares March 2 in its initial sale, valuing the company at $5.87 billion based on 308.9 million shares outstanding.

GFL is the largest Canadian IPO since PrairieSky Royalty Ltd.’s offering of $1.54 billion in May 2014.

GFL had earlier planned to raise as much as $1.54 billion but was caught out by the panic over the coronavirus that swept markets last week. As markets calmed down March 2, the company decided to go ahead only to be faced by more market turmoil March 3.

“I’m thrilled that in the face of very challenging market conditions over the last week, we were able to successfully market and price one of the largest IPOs in TSX history,” GFL founder and CEO Patrick Dovigi said in an email March 2.

Separately, the company offered 15.5 million of 6% tangible equity units at $50 apiece concurrent with the IPO. It will receive net proceeds of about $2.09 billion and use that to pay down debt.

The offering is being led by JPMorgan Chase & Co., Bank of Montreal, Goldman Sachs Group Inc., Royal Bank of Canada and Bank of Nova Scotia.

GFL is third time lucky after canceling its IPO plans in November when investors balked at its debt load and questioned its growth prospects. It had sought to raise as much as $2.1 billion at the top end of its marketed range of $20 and $24 a share. Banks running the IPO could only muster support for the offering at about $18 a share, people familiar with the matter said at the time.

In 2018, GFL scrapped earlier plans for an IPO after getting backing from BC Partners and the Ontario Teachers’ Pension Plan that allowed it to recapitalize. The company had aimed to raise as much as C$1 billion through a share sale, people familiar with the plan said in January 2018.