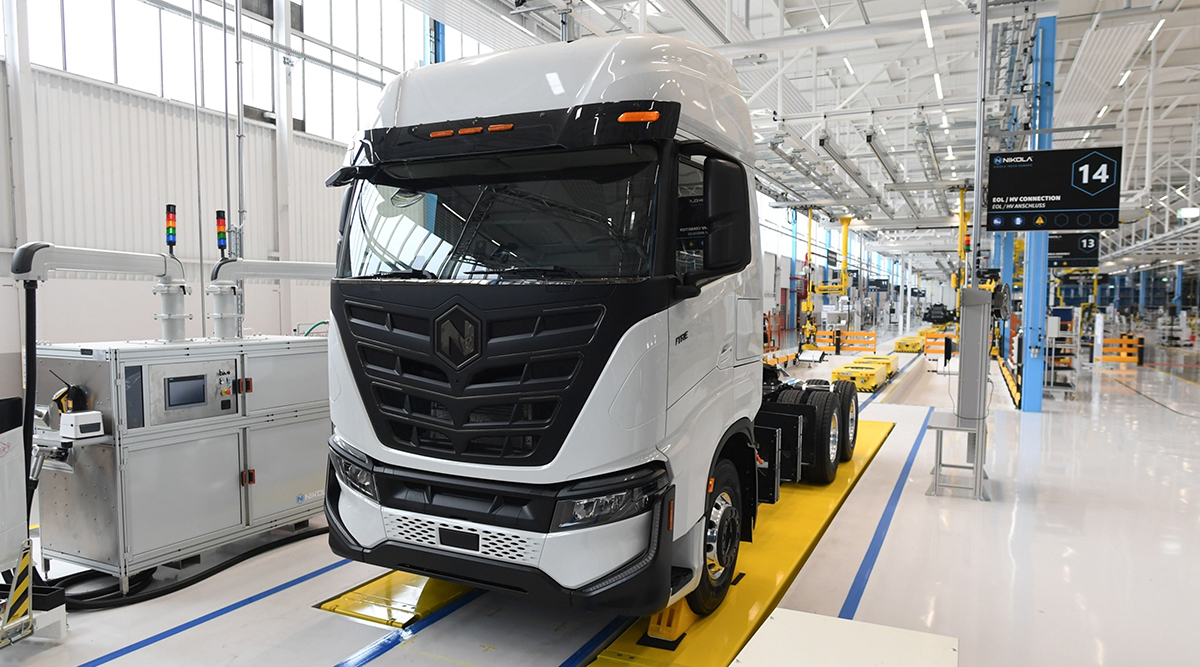 WACO, Texas — A country music group played softly in the background as men wearing cowboy boots and trucker hats ogled an odd European-looking, flat-faced semi-truck that stood out among the traditional tractors and trucks that surrounded it.

The men were trying to learn about the truck — a hulking, battery-powered electric Nikola-branded semi that’s among a few dozen of its kind in the U.S. — and how it can help their business’s bottom line. After all, diesel is costly these days, and electric motors have far fewer moving parts that need maintenance.

That’s the way that Holt Truck Centers — a subsidiary of the Holt companies, which are owned by the same family as the San Antonio Spurs — is trying to pitch customers on the value of the electric semi-trucks. Last summer, Holt Truck Centers signed a deal to become the certified dealer of Phoenix-based Nikola Corp.’s trucks in Texas.

Big rigs like the ones Nikola has begun producing could eventually replace the diesel-burning trucks on the road today and reduce the nation’s air pollution.

But Holt’s move is not without risk. Competitors aren’t equally embracing electrified big rig transport. And Nikola has had major troubles: Its founder was convicted of fraud in October, its second CEO departed this month, and the company has seen losses mount as it has struggled to produce enough trucks to meet its timelines and cost estimates. Other electric vehicle competitors, including Tesla Inc.’s Semi, are also coming to market.

Meanwhile, Holt’s business has long consisted of selling diesel-powered heavy-duty equipment such as trucks, tractors and generators to other businesses — often to oil and gas companies or other industrial operations. But the venerated San Antonio enterprise is trying to carve a path to an electrified future, even if Holt sees diesel equipment sticking around for some time.

“Diesel engines aren’t going anywhere anytime soon. They’re going to be around for a long time,” said Brandon Acosta, vice president at Holt Truck Centers, as he stood in front of a steel case on the Nikola truck that holds nine lithium-ion batteries weighing 1,100 pounds each. “But we want to be part of the future. The only way we get there is being a part of it. We’ve got to help Nikola be successful.”

Since 2020, Nikola has sought to distance itself from its founder, Trevor Milton, who was convicted of fraud last month for lying to investors about the capability of Nikola’s products and technology to boost his company’s stock price and personal wealth.

A now-infamous video that Nikola posted to social media in early 2018 depicted one of the company’s hydrogen-powered electric trucks on a highway test drive. But it was later revealed that the truck wasn’t functional; it had been towed to the top of a remote hill and rolled down the road.

Milton will be sentenced in January.

Former Nikola executive Mark Russell took over as CEO following Milton’s departure in September 2020. Then the executive job turned over again in August, when Russell announced he was leaving and Michael Lohscheller was named CEO. Lohscheller worked for a Vietnamese electric vehicle company as recently as late last year.

Nikola said Nov. 3 that it produced 75 trucks at its Arizona factory from July through September. That brought the total number of trucks the company has manufactured to 125, having built the first 50 Tre battery-powered trucks earlier this year. 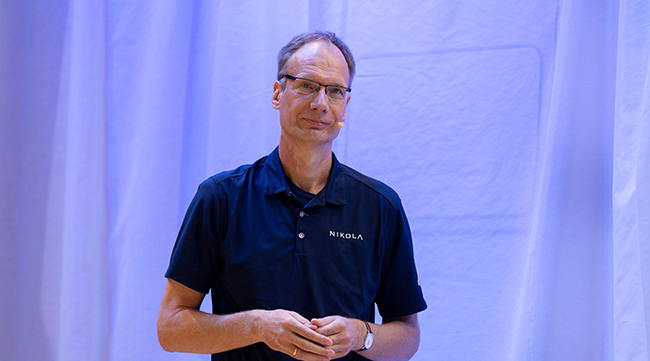 After setting a goal to build 300 to 500 electric trucks this year, Nikola said it now manufactures three trucks per shift — meaning it will likely fall short of the low end of its production target.

Nikola generated $24 million in revenue from truck sales during the three-month period. The company’s quarterly loss topped $236 million, and Nikola has lost more than $536 million this year.

Nikola’s once-high-flying stock — the company at one point had a higher valuation than Ford despite not having revenue — has tumbled amid the Milton saga. After Nikola reported earnings Nov. 3, its shares sank 3.5% to $3.18. The stock has dropped by 69% since the start of the year.

From Holt’s perspective, Acosta said the Nikola employees Holt has worked with are “very professional.”

“I’m thankful, frankly, that they made that decision so long ago to remove (Milton), and we can focus on what we’re going to focus on,” Acosta said. “They’ve been great.”

Holt Truck Centers recently loaned out “a couple” of its Nikola Tre battery-powered trucks to customers to run demos, Acosta said. The truck can drive 250 miles on a fully charged battery.

“The resounding feedback is that people are excited to reduce their emissions and the truck is performing,” he said. “Now, the big challenge and holdup for everybody is grants. People are really wanting to see how that grant money comes through.” 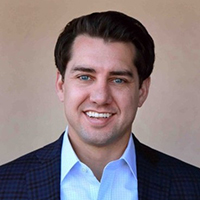 Diesel engines aren’t going anywhere anytime soon. They’re going to be around for a long time. But we want to be part of the future.

Acosta said Texas offers numerous state grants — mostly through the Texas Commission on Environmental Quality — and the recently passed federal Inflation Reduction Act offers a tax credit for heavy-duty commercial electric vehicles that is worth as much as $40,000 per vehicle.

Nikola has said it sells its trucks for about $350,000 each as battery packs have gotten more expensive. That’s roughly double the price of a diesel-powered Peterbilt or International brand truck.

Holt is trying to determine whether the total cost of owning a Nikola truck — which doesn’t require fuel or nearly as much maintenance work — is lower than owning a traditional diesel truck.

“We’re seeing federal support, local and state support, so we’re going to put that to use for our customers and help them with the acquisition cost,” Acosta said. “When you look at total cost of ownership, diesel is costing customers quite a bit. The average truck gets 8 to 10 miles per gallon.”

New Braunfels-based Rush Enterprises operates about 140 truck centers across the U.S. and Canada — versus the 12 locations Holt Truck Centers operates in Texas and Oklahoma. But Rush has eschewed major investments in electrified trucks, instead focusing on a low-carbon initiative to run more trucks on natural gas, which is cleaner than diesel.

For now, Holt is trying to find ways customers can use the Nikola Tre. Battery-powered trucks are much heavier than diesel semis, and piling up numerous batteries to extend a truck’s driving range reduces the amount of goods it can transport.

And charging the truck can be a challenge, Acosta said. So-called “fast” chargers that can charge a truck in a couple of hours require a kind of high-voltage electric infrastructure typically found in industrial plants.

“That’s not something you just get anywhere,” Acosta said of the fast chargers. “If you’re going to charge this overnight, you don’t need all that. In an eight-hour span, it’ll fully charge up on the right charger.”

While Holt figures out how much payload Nikola’s truck can carry and optimizes charging, Acosta said, the best use will likely be routine, short-haul deliveries.

Houston “seems to be the big market,” he said. “Drayage applications, where you’re taking containers off of ships and taking the stuff to a yard to be distributed, those customers are very excited about (electric vehicles). It’s repetitive all day long, and then (the trucks) go home and charge all night.”

Hydrogen fuel cells could replace batteries and increase payload in longhaul trucks. Ambient air and hydrogen from a fuel tank react in the fuel cell to produce electricity and water vapor, and the fuel gives Nikola’s fuel cell truck a longer range than its battery-powered counterpart.

Nikola is still pilot testing its fuel cell trucks, which are less developed than the battery-powered version. Acosta said Nikola has indicated it will deliver one of its fuel cell electric trucks to Holt by the end of next year.

Nikola has slowly shifted to focus more on developing the fuel cell truck, which likely offers more long-term potential than the battery version. By 2026, Nikola said, it plans to produce 300 metric tons of hydrogen per day from several sites around the country, as well as develop 60 hydrogen refueling stations — which are like gas stations, but with hydrogen.

Acosta said he’s aware of the challenges of introducing an electric truck. But he thinks about it in historic terms.

“This reminds me of the conversation that likely the first person that was on a train had with a guy on a horse. The guy on a horse was like, ‘I just have to feed and water my horse; where are you going to get (fuel) for this train?’ ” Acosta said.

“We do have a strategic initiative to be part of the energy transition,” he said. “And we don’t know what the future looks like, but we’re fortunate to have owners that are invested in it.”