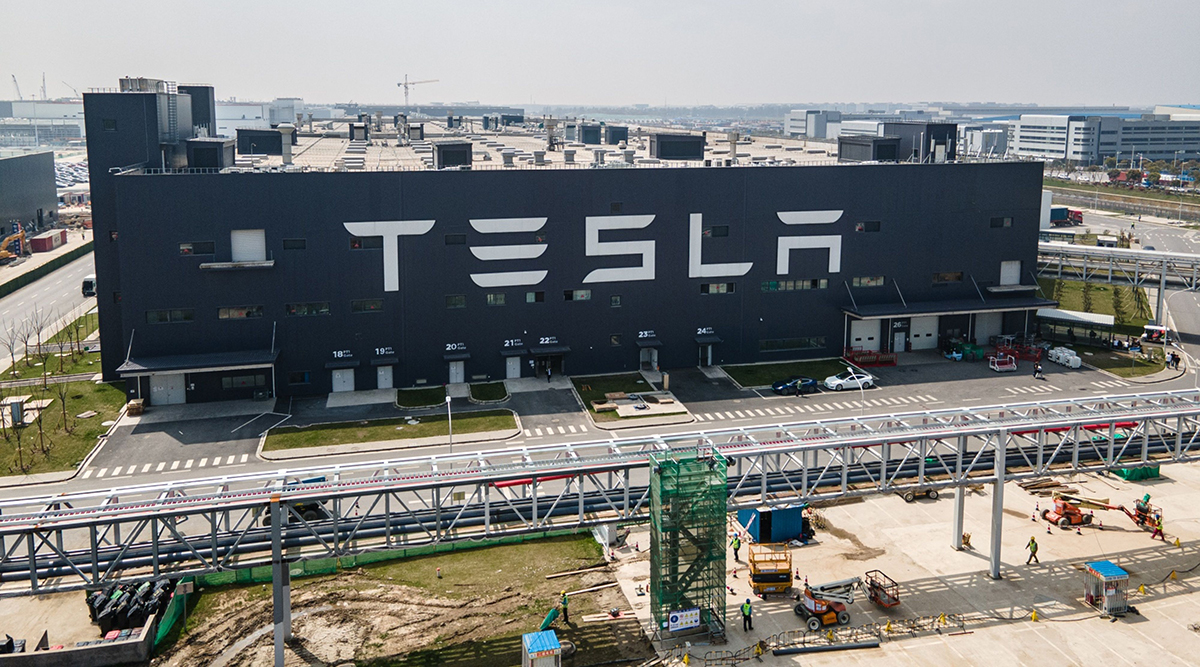 After a $280 billion rally since late May, Tesla Inc. is using a trusted method for fueling further gains. It may not pan out like that.

The electric vehicle maker’s second stock split in as many years took effect when U.S. markets opened Aug. 25, a move aimed at bolstering an already strong retail investor base. The previous one in 2020 was among a number of factors that drove the stock up more than eightfold that year.

The latest split comes close on the heels of similar moves by Amazon.com Inc. and Alphabet Inc., whose subsequent stock performances have suggested this once dependable tactic to boost valuation is losing its potency amid the ravages of a bear market. Amazon shares fell more than 10% from when it announced the split to the day it became effective, while Alphabet lost 21% between those events.

“The stock split smoke-and-mirror boost is much more prevalent in a bull market when retail investors rush into stocks,” said Greg Martin, managing director and co-founder of Rainmaker Securities. “In bear markets retail investors tend to be less involved and the institutional players would never be fooled by a stock split to move into a stock.”

Shares of the Elon Musk-led company fell 12% through Aug. 25’s close since late March when it declared its plan for a split, a far cry from 2020 when the stock surged 60% from announcement to the last close prior to the beginning of split-adjusted trading.

Riskier growth stocks like Tesla have borne the brunt of a souring equities market mood this year amid the threat of a recession. The stock is down 16% year-to-date, headed for its first annual decline since 2016. And having rallied 41% since hitting a year low on May 24, the rebound has hit a wall in August as broader enthusiasm among retail investors has started to flag again.

According to Vanda Research, investors tend to “drastically scale back” purchases of stocks in the weeks after a split takes effect. The firm doesn’t believe it will be any different for Tesla this time around, it said in a note.

In addition to a tentative investor mood, the stock’s eye-watering valuation may also make gains harder to come by. Tesla trades at about 58 times forward earnings estimates compared with 18 times for the S&P 500 Index. And the average analyst price target implies a decline of about 4% over the next 12 months, even as the benchmark index is expected to rise more than 15%. 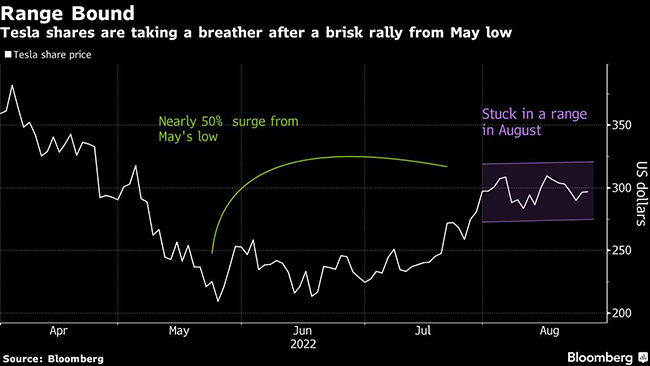 “There is a lot of hope, speculation, hero worship in the current valuation,” said Catherine Faddis, chief investment officer of Grace Capital. In order to buy the stock right now, an investor needs to believe that in 10 years Tesla will have revenue of $800 billion, Faddis said, almost 10 times estimates for this year.

Then there is the company’s litany of challenges — production troubles in China, the persisting supply chain shortages across the automotive industry and high raw material costs, as well as Musk’s litigation with Twitter Inc. — that can dull the shine of any potential exuberance driven by the split.

Still, Tesla’s strong popularity with the mom-and-pop investing crowd can ensure a short-term bump in the stock, if wider investor sentiment improves again.

“A strong retail following is the key ingredient for a stock split to make a difference,” said Martin of Rainmaker Securities, adding that Tesla’s timing for the split may prove to be lucky as the climate act will “create substantial new demand for electric vehicles and Tesla is the market leader in the EV market.” 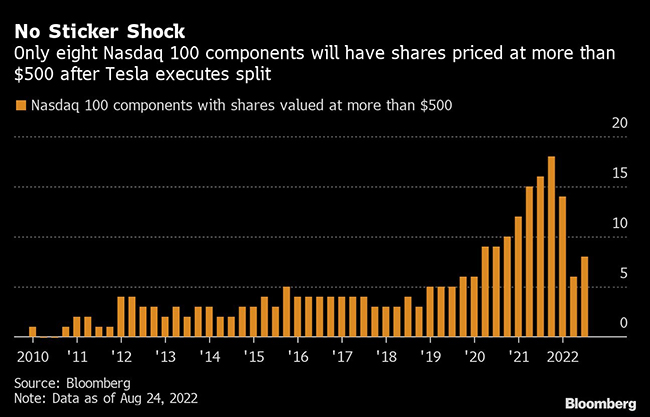 After Tesla executed its split there are now only eight Nasdaq 100 components with stocks priced at more than $500. This year’s market selloff, coupled with a series of splits, has meant that the number of companies with share prices exceeding $500 has halved from the beginning of the year.