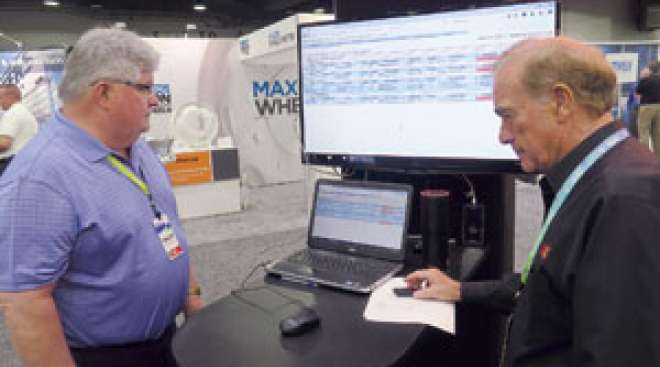 This story appears in the May 8 print edition of Transport Topics.

CINCINNATI — Shipper-owned fleets are ramping up the use of technology to help meet new federal regulations related to the transportation of food, the adoption of electronic logs for drivers and making their trucking operations more efficient.

A number of the companies at the National Private Truck Council annual education management conference and exhibition here said they are scrambling to keep up with the demand for products and services that help private fleet executives to deal with new challenges, such as hiring and retaining drivers and utilizing data analysis to improve services and control costs.

“Things were on hold prior to the presidential election,” Dames noted. “Now we see momentum, and we are very optimistic.”

About one-third of all new medium-duty trucks are purchased by leasing companies and, while smaller than the Class 8 truck market, it is an “area of opportunity,” Dames said.

PacLease also introduced a program to help customers track and pay tolls. The PacToll program was developed with Bestpass, a company that provides transponders that connect with more than 40 tolling authorities in 23 states.

David Ricketts, regional sales director for Coretex Inc., said his company is scrambling to meet all of the requests for the company’s telematics and video monitoring systems, which is being driven, in part, by the need to comply with new federal regulations. “It’s a good problem,” he said.

Implementation of the Food Safety Modernization Act is driving interest in technology to help monitor food in transit. The new rules took effect April 6 for large businesses, and the U.S. Food and Drug Administration is expected to begin inspections later this year.

And while there’s little chance of the e-log mandate being put off, vendors here said it isn’t clear how the rules will be enforced when they take effect in December and that many companies continue to put off the decision to acquire the technology.

Fleets that wait too long are “really gambling,” said April Dennis, market management director for Pedigree Technologies in Fargo, N.D., because there won’t be enough product or enough installers to meet a last-minute surge in orders.

Doug Hawley, vice president of InSight Mobile Data in California, Md., said some companies are waiting for President Donald Trump to intervene. “If they don’t start by September, though, I think they will be in trouble,” he said.

Paul Pirkle, CEO of Modagraphics in Rolling Meadows, Ill., is bringing new technology to bear on the business of truck graphics, partnering with British firm Spedian to sell a temporary, changeable cover for trucks and trailers and giving companies a way to advertise special events or to recruit drivers without disturbing permanent markings and painted graphics on the trailer.

Jerry Robertson, co-founder of transportation management software provider Bolt System in Nashville, Tenn., demonstrated how fleets could use Alexa from Amazon.com to get quicker answers about drivers and equipment availability.

“It’s like the Jetsons,” said Dallas Heck, operations manager for MMC Transport, a 75-truck fleet operated by Mennel Milling Co. in Fostoria, Ohio. “It feels like some of the futuristic things we saw in those cartoons are coming around and are a reality.”

Heck said the new technol­ogy is appealing to millennials who want to use technology at work that they use in their personal lives.

Robertson said he believes voice-activated fleet management can save managers several hours a day by automating data analysis. He still is testing the system and hopes to have it ready within six months to a year.

Xtra Lease Inc. is installing trailer-tracking systems from SkyBitz on its fleet of more than 50,000 dry van and refrigerated trailers, allowing fleet managers to see where their equipment is and how long trailers have been idle.

“One of the most important services we can deliver to fleets is the ability to identify dormant and underutilized rented trailers,” Xtra Lease CEO Bill Franz said.

PeopleNet introduced two new features in its telematics platform. One is myRoads, which provides real-time weather and road condition alerts to drivers. The other is myMedia, a software application that gives fleets the ability to exchange documents, photos, videos and other multimedia files between drivers and office personnel.

“We are giving drivers easy access to new data to help them be safer and more effective,” said Jim Rodi, executive vice president and group general manager for transportation at PeopleNet in Minneapolis.