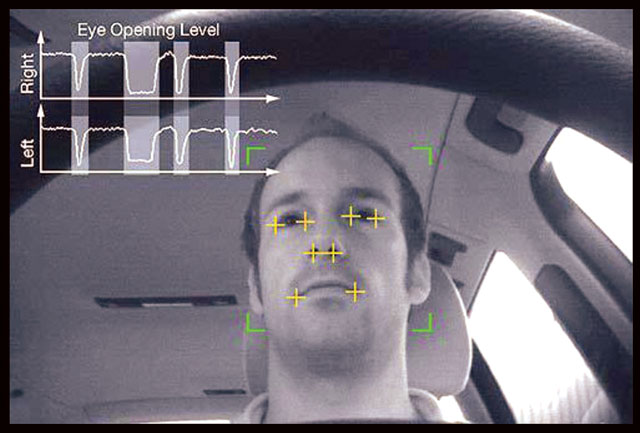 Several technology suppliers are offering onboard systems that monitor the driver’s face for signs of distraction or drowsiness.

The company’s camera uses infrared light to work at night and see through sunglasses.

Most customers also install a device that vibrates the driver’s seat. If the driver’s eyes are closed too frequently or directed away from the forward view for too long, an alert is triggered.

At the same time, a message is sent to the Seeing Machines monitoring center in Tucson.

“When an event occurs, a packet of data is sent that contains relevant information, such as GPS location and truck ID, along with a snippet of the video of the driver’s face, so that someone there can check and see if it really is a fatigue or distraction event,” Nagy said. If so, an e-mail is sent to the fleet manager, who can then contact the driver.

The Driver Distraction Monitor from Safety Vision uses a similar system to monitor the driver’s face. In addition to vibrating the seat, sounding an alarm and sending text messages or e-mails to safety directors, the DDM offers the option of viewing the driver live.

Safety Vision provides an application that allows customers to view a truck while it is driving and see all of the camera views on their smartphone, tablet or computer, said David Wehmeyer, mobile video and automatic vehicle location systems adviser.

When fleet managers receive a fatigue-related alert, they can use this Live View app to see how severe the fatigue is.

“This makes it possible to be proactive before there’s an incident,” Wehmeyer said.

A continuous loop of video stretching back three weeks is kept on a DVR that is installed inside the cab as part of the Safety Vision system. “If the DDM triggers an event, you can look at the video and even rewind to see as far back before the event as needed,” Wehmeyer said.

Another company that offers a system that tracks the driver’s eyes and head is Guardvant, whose OpGuard system has been in use in the mining industry for about four years.

The company also has been testing a product for the trucking industry since mid-2015 and plans to roll it out in the second quarter of this year, said Ryan Hawes, vice president of business development.

“One of the challenges of the fatigue-detection industry is that people deny that they are experiencing fatigue,” Hawes said. “Drivers don’t believe that a microsleep event occurred, but the fact is that you don’t necessarily notice microsleeps.”

Cloud Peak Energy, a Gillette, Wyoming-based mining company, has been using Guardvant’s system for about three years and has installed it in about 80 trucks.

“We definitely have seen a reduction in accidents since we implemented the system,” said Jim Long, mine monitoring and control manager at Cloud Peak Energy.

Fatigue monitoring also can be achieved through a stand-alone product from Rear View Safety, whose dash-mounted Vuemate RVS-330 camera looks for drowsiness in the driver’s eyes and sounds an alarm when needed.

Maven Machines, for example, offers a headset that sounds an alert when it detects that the driver is nodding off.

Another company, SmartCap, uses a sensor-equipped hat to monitor a driver’s brainwave activity. Drivers can track their alertness level through a display unit mounted in the cab.

The SmartCap system warns drivers when they are just starting to move away from alertness toward fatigue, said Brady Marcus, the company’s business development manager.

“This gives the driver the chance to take action, such as drink some water, sit up straight, roll the window down, change the radio station or whatever is needed to bring them back to an alert state,” he said.