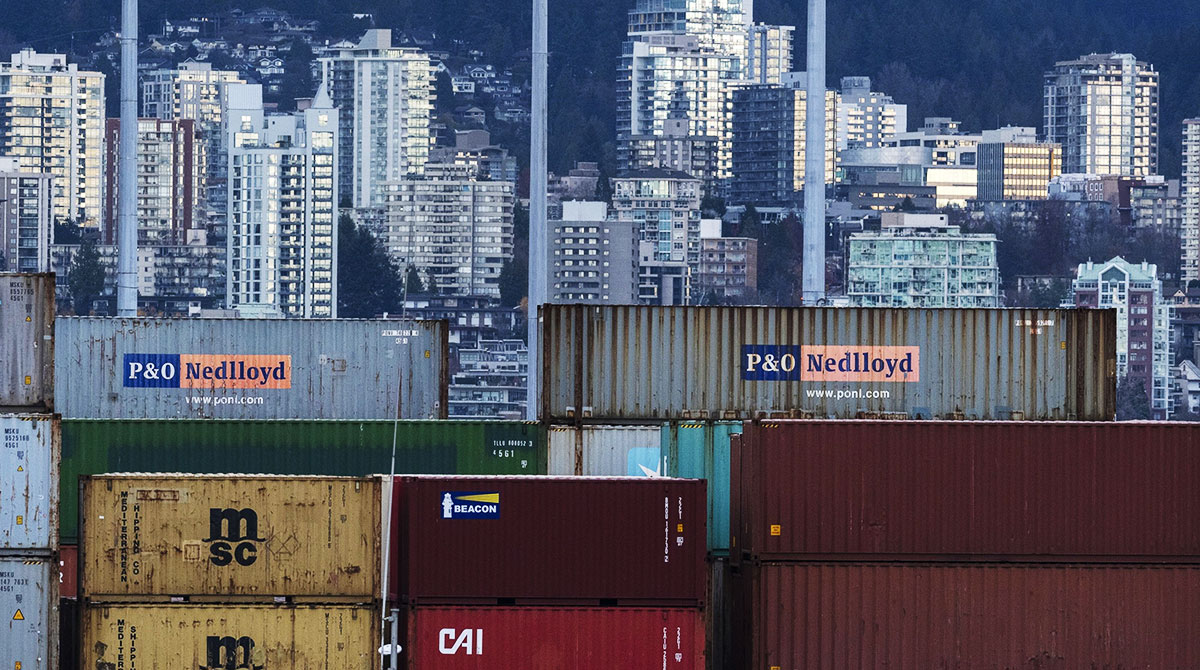 Containers at the Port of Vancouver in Vancouver, British Columbia. (Jennifer Gauthier/Bloomberg)

Traffic at Canada’s largest port has been cut off by what local officials are calling the storm of the century, the latest snag to hit the North American supply chain.

Days of torrential rain have pelted British Columbia, triggering floods and landslides that have blocked the tracks of the nation’s two major railways and washed away parts of its main east-west road artery, the Trans-Canada Highway.

It’s the second time in less than five months that British Columbia — a major conduit to Asian markets and home to one of the busiest ports on the West Coast — has been paralyzed by extreme weather: wildfires and a record heat wave choked the region in the summer. This time the disruptions threaten the movement of goods ahead of the busy winter holiday season.

Flooding has halted rail services to and from the Port of Vancouver and also shut all main routes by road, the port said in a statement. It’s not yet known when Canadian Pacific Railway Ltd. and Canadian National Railway Co. will be able to reopen their lines, it said. Nearly 1,000 rail cars carrying grain are idled in the Vancouver corridor, according to estimates from Ag Transport Coalition.

A look from a flyover of #BCHwy1 at Tank Hill near Lytton and Nicomen.

British Columbia Transportation Minister Rob Fleming called it “the worst weather storm in a century” at a news conference late Nov. 16. Highway 3, an older route that runs roughly parallel to the U.S. border, may be the first to reopen, he said, without providing a time frame. The Trans-Canada and another major artery, known as the Coquihalla, will take longer, he said, noting the dramatic images emerging out of the region, including chunks of highway falling into rushing waters. “The infrastructure damage there is significant.”

“This has been an extreme weather event,” said Mike Farnworth, the deputy premier of British Columbia. “The impacts have been significantly greater than expected.”

About two-thirds of containers in British Columbia are transported by rail, said Dave Earle, CEO of the B.C. Trucking Association. “There’s going to be disruption,” he said by phone. “We just don’t know how much for how long.”

There is enough grain at port terminal elevators to keep exports moving for a “few days and perhaps a week,” said Mark Hemmes, president of Quorum Corp., a grain transportation monitoring company in Edmonton, Alberta. “After that, it’s about the wait.”

Port terminals rely largely on railways to deliver containers to load on ships, as well as transport imported and exported goods. “When the cycle of inbound rail cars stops, that’s when congestion starts to build at the port terminals,” Hemmes said.

Canadian Pacific said its track remains closed near Hope, about 93 miles east of Vancouver. Canadian National said multiple mudslides and washouts have damaged tracks and that repairs are progressing, but that outbound and inbound traffic in Vancouver is still affected.

The flooding is also disrupting energy infrastructure. Enbridge Inc. shut a segment of the Westcoast Pipeline, which delivers gas from the interior to the Vancouver region, as a precautionary measure early Tuesday due to heavy rain and increased river flow, spokesman Jesse Semko said by email.

Some of the worst flooding has been in Merritt, whose 7,000 residents were ordered to evacuate on Nov. 15. The town lies only 60 kilometers east of Lytton, which grabbed global headlines in June when it burnt to the ground after recording the highest temperature ever in Canada — 121 degrees Fahrenheit.

Earlier this week, some 275 people were airlifted by helicopters to safety after their vehicles were trapped on a highway between two landslides. So far, one fatality has been confirmed by the Royal Canadian Mounted Police.

Another Round of Snow Aimed at Frigid Northwest