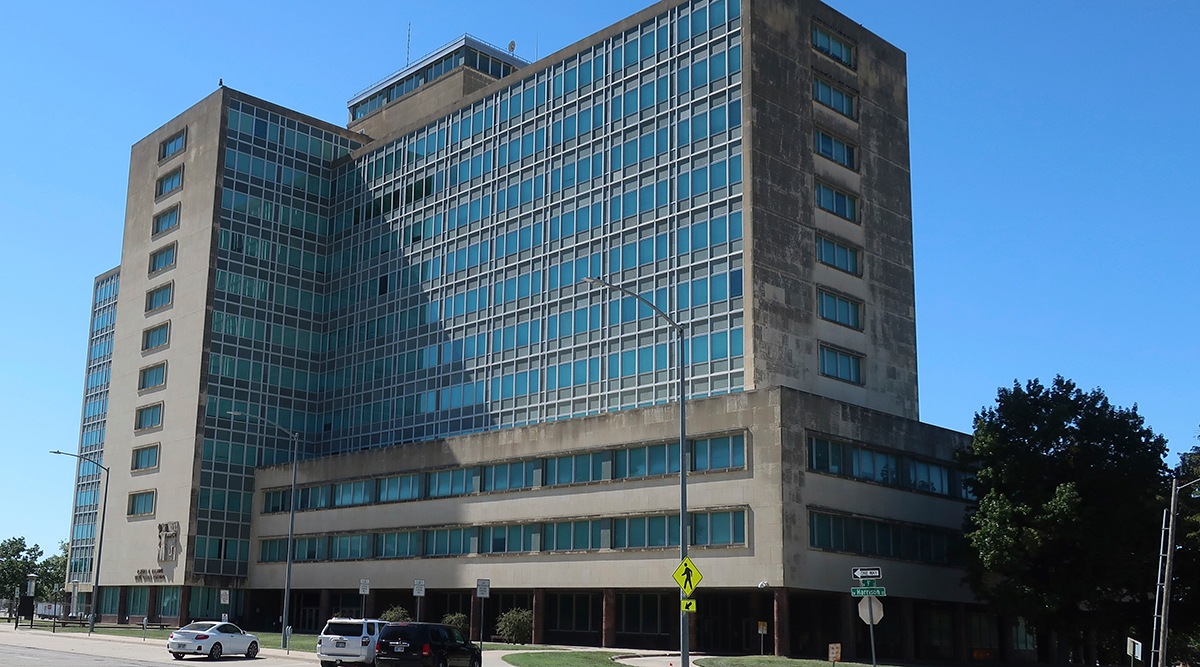 Standing 14 stories tall, the Docking State Office Building is one of Kansas’ largest and oldest state workplaces. It’s also largely vacant, despite a prime location across from the Capitol.

So Kansas officials are planning to spend $60 million of federal pandemic relief funds to help finance its demolition and replace it with a slimmed-down, three-story building designed to host meetings and events.

State officials categorized the project as a “public health service” in a report to the U.S. Treasury Department laying out their plans for the money. Though that may be a stretch, it’s likely fine under the American Rescue Plan act — a sweeping law signed by President Joe Biden last year that provides broad flexibility for $350 billion of aid to states and local governments.

The aid was promoted by Democrats in Congress as an unprecedented infusion for cash-strapped governments to respond to the virus, rebuild their economies and shore up their finances. But it came as state tax revenues already were rebounding, leaving many states with record surpluses and enviable decisions about what to do with all the money.

Relatively little of the federal aid has gone toward traditional public health purposes, according to an Associated Press review of reports filed by all 50 states and the District of Columbia. Significantly more has gone toward public infrastructure. States are pouring money into water, sewer and high-speed internet projects, as specifically envisioned by the law. But the AP found that they’re also spending billions of dollars on roads, bridges, sidewalks, airports, rail lines and buildings at college campuses and government agencies — justifying all of it under the federal government’s generous flexibility.

“We didn’t need it, to be quite honest,” said Kansas House Appropriations Committee Chairman Troy Waymaster, referring to the $1.6 billion the state received.

But the Docking building does need to come down, he said, and the new space for events and meetings could allow better social distancing during a COVID-19 resurgence or future pandemic.

If “the building itself could be used during a pandemic, then it somewhat justifies the use of ARPA funds for the renovation or infrastructure projects,” said Waymaster, a Republican.

A Kansas preservationist group has asked a court to block the demolition, arguing that Democratic Gov. Laura Kelly’s administration hasn’t followed proper procedures to tear down the 65-year-old structure that was added to the National Register of Historic Places earlier this year.

“There’s some wrongheaded action going on here to demolish what really is a perfectly suitable building,” said Paul Post, a retired Topeka attorney and member of the Plains Modern preservationist group.

All states recently were required to file annual reports with the Treasury Department detailing their progress under the American Rescue Plan. The documents show states have planned expenditures for about three-fourths of their funds, up significantly from an initial slow pace.

The Treasury asked states to classify projects in seven general categories, with 83 subcategories. It can recoup funds if it determines by the end of 2026 that spending fell outside the law’s wide guidelines.

By contrast, governments reported less than $12 billion of planned expenditures in the Treasury’s public health category — even though it was broadly construed to also include such things as “community violence interventions,” substance use services and COVID-19 aid to small businesses.

Some state officials may have decided not to use the relief funds for public health because they had other federal funding streams for vaccines, testing and health initiatives. For example, a separate section of the American Rescue Plan provided nearly $8 billion for state and local health departments. But the large influx of funds may also have stirred concerns about sustainability.

Though public health has historically been underfunded, “a lot of health officials have struggled to get their policymakers and their bosses to commit to hiring people for the long-term because it’s one-time money,” said Dr. Georges Benjamin, executive director of the American Public Health Association.

Some states reported no public health expenditures with their discretionary American Rescue Plan funds. Those included Florida, which received the fourth largest allotment from the federal government. Florida instead devoted $1.8 billion for highway, $1.9 billion for water projects and more than $2.5 billion for construction and maintenance of public buildings, including the Capitol, university facilities and K-12 schools, according to the AP’s analysis.

The state’s water initiatives include up to $700 million for a grant program to fight flooding associated with climate change. The city of Miami was awarded about $50 million for a half-dozen projects, including one that will nearly double the height of a sea wall in an area devastated by a storm surge from Hurricane Irma in 2017. 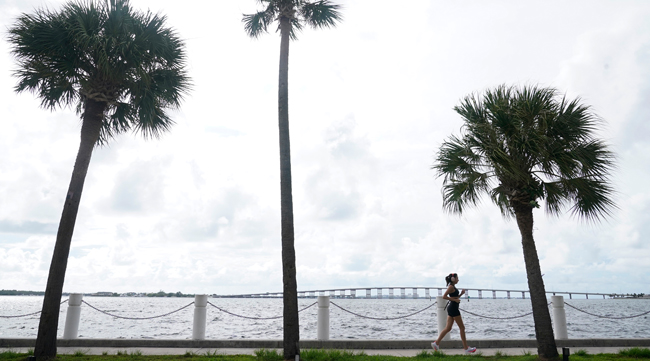 A jogger runs along a sea wall in Miami. (Marta Lavandier/Associated Press)

The goal of the project is “to protect the residences and the businesses from future storm surge and sea level rise,” said Sonia Brubaker, Miami’s chief resilience officer.

Louisiana also listed no planned expenditures in the Treasury’s public health category. But the state plans to spend $863 million on roads and bridges, $750 million on water and sewer infrastructure and $27 million for improvements to the domed stadium where the New Orleans Saints play football.

North Carolina Gov. Roy Cooper, a Democrat, also defended $46 million of grants to upgrade grandstands, walkways, bathrooms and infrastructure at racetracks across his state. “Motorsports are part of the fabric of North Carolina,” he said earlier this year.

Alabama prisoners have sued the Treasury Department to try to stop the state from spending $400 million on prison construction. Though the state agues it’s OK under the Treasury’s flexible rules, the lawsuit contends it’s “a gross and illegal misuse” of pandemic relief funds.

A coalition of more than two dozen construction, business and local government groups is pressing Congress to grant even more leeway to use pandemic aid on transportation projects.

“Having a good infrastructure that allows us all to live and thrive” ultimately “leads back into public health,” said Stan Brown, past president of the American Public Works Association.

Missouri, which has yet to categorize most of its projects, also is investing heavily in infrastructure by directing hundreds of millions of dollars to buildings at community colleges and public universities. The NextGen Precision Health initiative at the University of Missouri will get nearly $105 million for improvements that include finishing off the fourth floor of a new building named for retiring U.S. Sen. Roy Blunt.

“A lot of this was already going to happen,” although no specific timeline had been set, said university spokesperson Christian Basi. “Then COVID hits, and then ARPA funds are available. It’s coincidental odd timing, but it turned out to be a very, very helpful thing for us.”

Like Missouri, Utah categorized $90 million for a new mental health research facility as a replacement of lost revenue for government services. Construction is to begin next year on the building, which will host research on suicide and the effect of social isolation on children’s mental health, among other things.

The planned work aligns nicely with the intent of the federal aid, said Mark Rapaport, CEO of the Huntsman Mental Health Institute at the University of Utah.

“A lot of what we’re doing is directly related to tackling issues that have been exacerbated by the pandemic itself,” he said.