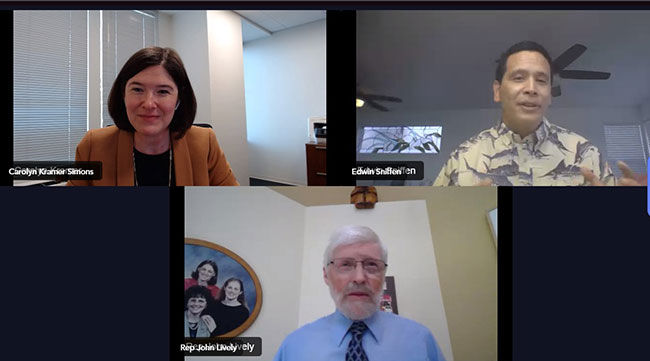 Road usage charge initiatives at the state level can offer models for a federal program, which should be formulated sooner rather than later, according to experts gathered at a transportation funding event.

Several states, including Oregon, Hawaii, Utah and California, have pursued road usage charge programs. The purpose is to ensure drivers pay for the miles of road that they use, rather than the gallons of fuel.

“What we’re advocating for on the federal side is the federal government takes these individual pilots from different states and sets up a pilot nationally,” said Edwin Sniffen, deputy director for highways at the Hawaii Department of Transportation. “The gas tax has to change federally. There’s no way for that to be sustainable in the long term, given not just EVs but higher mileage per gallon that you get on vehicles nowadays. In the end, all of the programs — federal, state and local — will be tied to road usage charge.”

Oregon state Rep. John Lively (D-Springfield) agreed with Sniffen, noting a “national test of this is important sooner rather than later” because of the flagging federal fuel tax.

Sniffen and Lively spoke at the Transportation Investment Advocacy Center’s National Workshop for State and Local Transportation Advocates on July 14. TIAC is a component of the American Road and Transportation Builders Association.

HDOT is leading the Hawaii Road Usage Charge Demonstration (HiRUC), which began in 2018 with financial support from the Federal Highway Administration. The Oregon Department of Transportation runs OReGO, a voluntary usage program that assesses a per-mile charge.

A Variety of Methods

“We’ve been trying to diversify the funding as much as possible, fully understanding that gas taxes have been flat and are going to start progressing downward, especially because we’re adopting EVs so quickly in Hawaii,” Sniffen said. “We’ve been trying to make sure that we hit different areas for funding to make sure that we don’t overtax a certain area and don’t depend specifically on gas taxes.”

When developing usage charge programs, Lively stressed the importance of transparency with the public. Oregon was an early pioneer of these programs; Lively said the state has been studying road usage charges since 2001.

Additionally, Lively said fairness and equity are important concerns, mentioning there are people who cannot afford to transition to EVs.

“I’m a strong believer that road user fees and people paying per mile is the most fair system,” Lively said.

Sniffen identified gaining public trust as a hurdle HDOT encountered with HiRUC. He said the department initially was met with opposition from constituents and had to dispel confusion at public meetings. He and his colleagues held 14 town halls to reach different districts and communities, and said the public gradually has grown more supportive.

“There was a lot of misinformation or misunderstanding of what a road usage charge actually is,” Sniffen said. “People thought it was going to be on top of the gas tax.”

HiRUC is one of several state-level efforts that has received support from federal funding. On March 16, FHWA awarded $18.7 million to eight projects to test user-based funding methods. The funding was awarded through the Surface Transportation System Funding Alternatives program. Created by the Fixing America’s Surface Transportation Act of 2015, the program supports states that are exploring user-based revenue mechanisms.