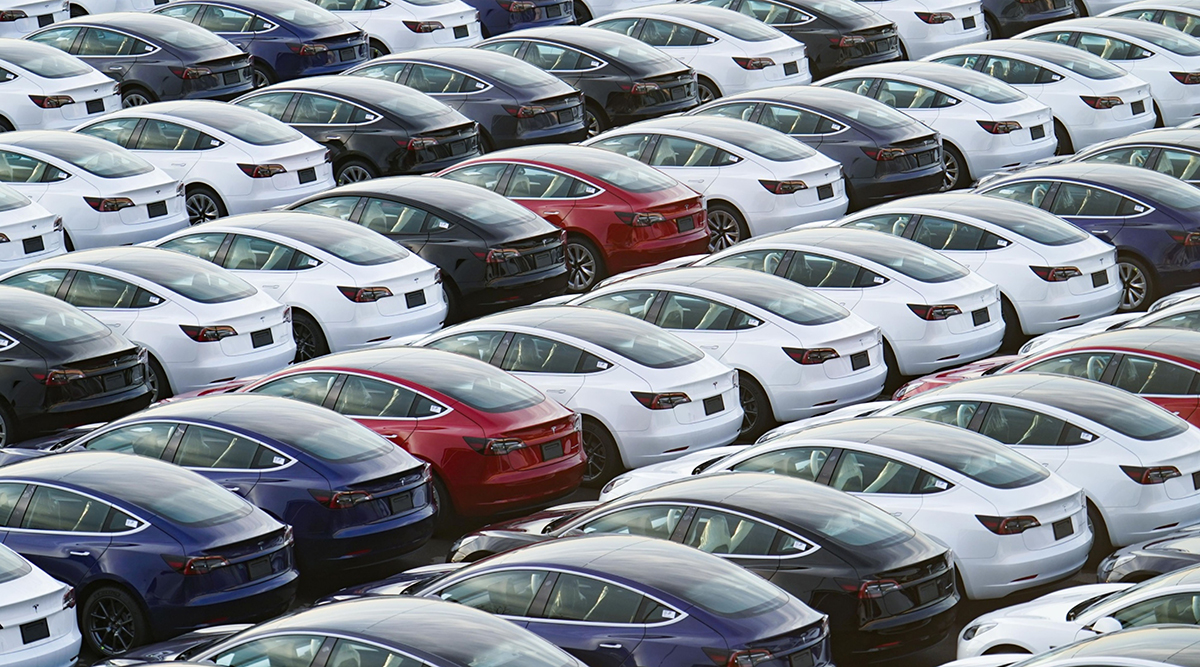 Teslas in a parking lot after arriving at a port in Yokohama, Japan. (Toru Hanai/Bloomberg News)

Tesla, GM, Volkswagen and Ford are among the automakers set to get big orders from Autonomy, a startup offering drivers the option of subscribing to an electric vehicle instead of buying one outright.

Autonomy plans to announce Aug. 9 that it’s ordering nearly 23,000 EVs from 17 different automakers for a total outlay of $1.2 billion. With chip shortages limiting production capacity at most automakers, it’s unclear how soon such a fleet could be amassed. The order represents 1.2% of the projected U.S. electric vehicle production through the end of next year.

Some deliveries won’t begin until the fourth quarter or early 2023, Scott Painter, Autonomy’s founder and CEO, said in an interview. The Santa Monica, Calif.-based company launched its subscription service in January and currently has 1,000 cars — all of which are Tesla models. 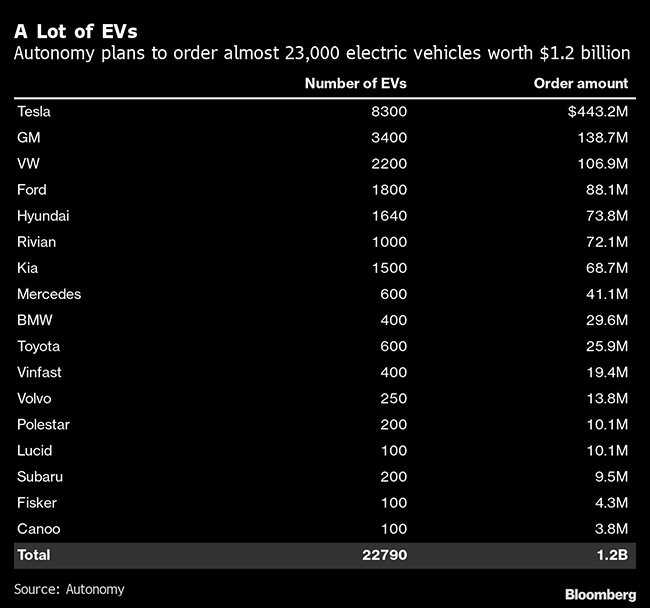 “This 23,000 order is really about diversifying away from Tesla and getting into everything at different price points,” said Painter, who is best known for founding auto-pricing company TrueCar Inc.

Tesla Inc., the market leader in battery-powered cars, is expected to account for 8,300 vehicles worth $443 million, according to the company. Autonomy plans to order 3,400 Bolt EVs and EUVs from General Motors Co., 2,200 vehicles from Volkswagen AG, 1,800 from Ford Motor Co., and 1,640 units from Hyundai Motor Co. It also will buy from newer players such as Lucid Group Inc. and Rivian Automotive Inc.

"A monthly car subscription service will allow you to start driving a Tesla much faster than with a lease." We check out the ways an #EV subscription drives circles around traditional leasing. https://t.co/ZKe1tygOji — Autonomy (@drive_autonomy) August 8, 2022

Hertz Global Holdings Inc.’s blockbuster announcement last year of plans to buy 100,000 Tesla vehicles paved the way for more fleet deals involving EVs as automakers ramp up production. Tesla models are now available for retail rentals with Hertz in more than 30 markets in the U.S. More locations are expected in the coming months.

Hertz has also entered into a partnership with Polestar earlier this year that includes purchasing as many as 65,000 EVs over the next five years.