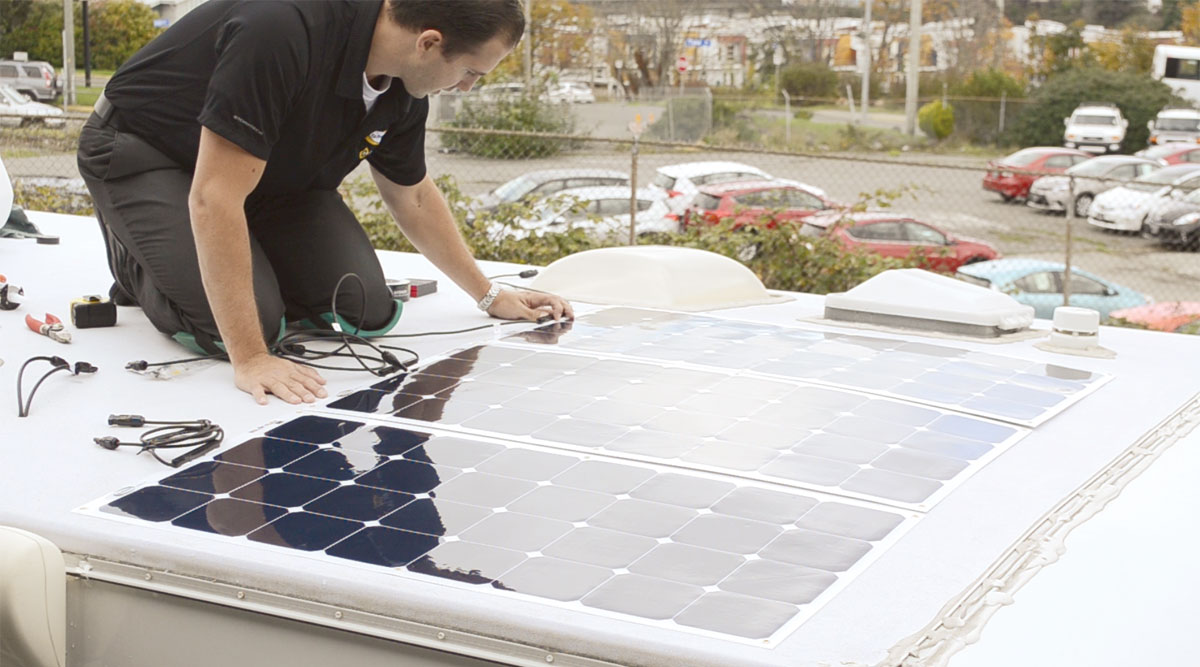 Fleets are deploying solar panels to help power a variety of onboard systems. Go Power

A growing number of fleets are turning to an alternative energy source — the sun — to help meet the growing demand for power on board their trucks.

Solar panels installed on the tops of truck cabs and trailers are generating energy for a variety of systems, including auxiliary power units to provide in-cab driver comfort, as well as for trailer refrigeration units and even liftgates.

And the latest trailer tracking devices use solar to support more frequent data reporting without the need to plug into an electrical connection.

“That constant triple charge from the sun makes your battery live and live,” Jones said, adding that his company has moved from its in-house solution to solar panels from eNow, which are now on 219 of the fleet’s trucks. 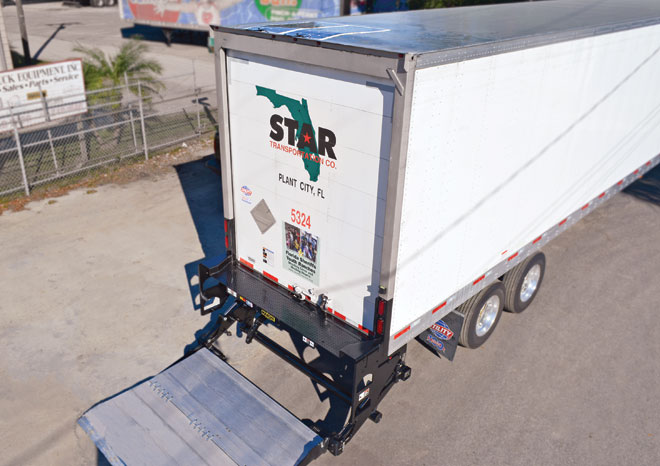 “If you’re running an electric APU, it makes your APU run longer. It improves your battery life and gives you more alternator life because you’re using the sun,” Jones said. “There is also a minute improvement in fuel economy because it takes fuel to run that alternator. It is also ­greener because less idle time is less pollutant time.”

“Everyone has been adding on more and more accessories to get more information and load integrity, but at the cost of battery,” said Paul Kroes, solar business development manager for ThermoKing. “We’re at the tipping point where all of the major fleets have adopted solar. It is no longer considered snake oil.”

Kroes estimates that by next year, upwards of two-thirds of ThermoKing’s refrigeration units will feature solar panels.

Donald Christenson, president of Christenson Transportation Inc., which is based in Springfield, Mo., said he has seen power needs increase, for both equipment and drivers.

“These new trucks, even when they’re turned off, draw quite a bit of power because of the different electronic control modules. If they sit for a week, then you’ve run all of the battery out of your starter,” he said. “You either have to go out and hire someone to start them every week or you have to replace batteries.”

The explosion of sensor capabilities offered by trailer tracking devices has led to more frequent reporting from those systems, but that expanding functionality also requires more power.

SkyBitz trailer tracking devices can report on everything from whether a trailer is loaded or empty, to whether the doors are open or closed, to whether brakes and tires are operating properly.

“The idea of the smart trailer puts a lot of demand on the product to communicate frequently,” said Henry Popplewell, president of SkyBitz. 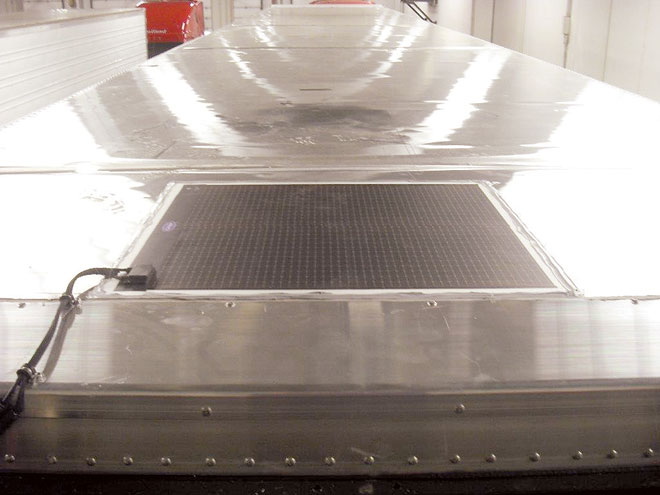 What’s more, drivers have more and more devices to plug in.

“People are keeping their own food on board, cooking their food, enjoying TV, running C-PAPs [for obstructive sleep apnea] and plugging in to charge their equipment,” said Sean O’Connor, business development manager at Go Power, a solar panel manufacturer based in Victoria, British Columbia.

Those accessories can continue to draw power while the refrigeration unit is off, which could drain the TRU battery to the point that it doesn’t have enough charge to start the engine if the TRU has not been operated for some time.

Richard Houska, director of maintenance for Holland Enterprises Inc., which is based in Fargo, N.D., said the fleet uses solar power from Carrier Trans­icold to support its reefer units.

The company is installing the solar products on 125 new trailers this year and plans to use the devices on every new trailer.

“We started with five, and I saw a benefit from not having service calls and having to run out a service truck,” he said.

“We get 20 below. If your battery is dead and it is 20 below, your battery could freeze,” he said, adding that solar improves driver satisfaction. “Drivers hate to put jumper cables on and jump a trailer. They like to get in the truck and go.”

Reyes Holdings, based in Rosemont, Ill., is spec’ing all of its new beverage units with solar power from ThermoKing to support refrigeration as well as liftgates.

“Being a distributor for McDonald’s, we cycle liftgates quite a bit,” said Bryan Messex, director of fleet operations for the company. “Not only do we do liftgates, we have a side gate and a rear gate and a compressor that pumps the Coke syrup into the stores. There are a lot of electrical demands on the trailer.”

Go Power’s O’Connor said liftgates use a lot of power, but they’re not on for a long period of time, which means they don’t have an opportunity to fully recharge. That makes them a prime candidate for solar charging, he said.

Reyes Holdings’ units without solar use dual power poles to charge liftgates, but drivers aren’t always good about plugging them in. In a large area, such as Atlanta, Messex said he’d see two or three service calls a week due to dead batteries. With an average road call taking two hours, that delay could disrupt delivery times or affect drivers’ layovers and deliveries for the following day.

On units with solar, road calls have been eliminated and on-time delivery rates are in the 99th percentile, he said. 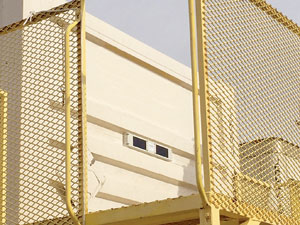 “If one road call averages you $400 to $500, you’d have the [return on investment] covered on one unit in about a month,” Messex said, adding that maintenance costs also have decreased and the fleet has stopped equipping trailers with dual chargers. The panels also come with a 10-year warranty and are maintenance free.

Solar panels from eNow, which weigh about 25 pounds, are designed to last between 10 and 15 years and have a five-year warranty.

Jeff Flath, CEO of eNow, said the ROI comes from extending the life of the APU and reducing idling, which saves $1 per hour in fuel and maintenance costs.

In the past, the APU could run about five to seven hours before the truck had to be started, he said.

“By utilizing the solar, we can get that up to 8 to 10 hours per day without having to idle the truck,” he said.

Spireon, a trailer tracking provider based in Irvine, Calif., offers a solar option for its FleetLocate system.

“This is particularly useful for assets with no access to external power sources, or assets which sit idle for long periods of time,” said Roni Taylor, vice president of industry relations for the technology vendor.

The ROI is improved by reduced downtime, extended durability and greater flexibility for fleets, she added.

Solar is one of the first technologies that provides a good ROI as well as “green” marketing, which is driving adoption, ThermoKing’s Kroes said.

ThermoKing’s panels have a 20-year life- cycle, he said, adding that the ROI is six to 12 months, but is even shorter for fleets that take advantage of a 30% federal tax credit.

For Mesilla Valley Transportation, which is based in Las Cruces, N.M., and ranks No. 72 on the Transport Topics Top 100 list of the largest for-hire carriers in North America, the value comes from increased battery life.

“We spend about $30,000 a month on batteries. All of our trucks have eight batteries instead of four, and we were typically changing those every year,” Jones said.

Flath, of eNow, said fleets typically see a payback period of zero to 18 months, and the benefits vary based on the size of the system and how often they’re being used.

Increasingly, today’s tracking devices are designed to last the life of the trailer.

Orbcomm’s GT 1100, which uses solar ­power, has a lifespan of up to 10 years and fleets see an ROI within about a year, said Sue Rutherford, vice president of marketing for Orbcomm.

New solar technology developments enable the devices to work even when there is little sunlight.

“Depending on the device, relatively short daylight exposure — approximately five hours a day for a week — can now generate enough power to allow a device to transmit messages for an entire year or more depending on reporting frequency,” Rutherford said.

Carrier Transicold’s solar panels do not require direct sunlight and they perform reliably even in low- and indirect-lighting conditions, Forman said. “As long as there is daylight, they will generate a charge, and that includes on cloudy days.”

If it is overcast, users can expect to get about half of the charge on Go Power panels that they’d get if it were sunny.

“We’re in Victoria, British Columbia; our climate is quite terrible for solar, but we have thousands upon thousands of systems working up here,” O’Connor said.

ThermoKing’s Kroes said that although panels don’t work when completely covered in snow, they are still producing heat, which will melt snow quickly. In some cases, the solar panels can melt off a foot of snow in a day or two, he said.