Shipping Stocks That Soared After the Election Have Now Tanked 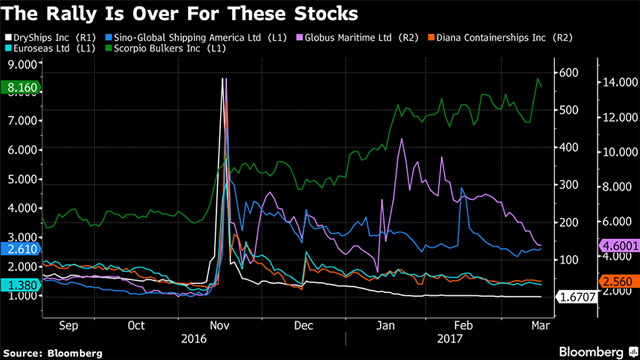 Almost as quickly as it happened, it was gone.

Shortly after Donald Trump was elected president Nov. 8, the stock prices of a slew of shipping companies soared by more than 1000% on hopes that commodity prices would rise and U.S. manufacturing would rebound, spurring a surge in shipments of everything from iron ore to computer parts.

However, analysts say that the hopes are fading, which is apparent in the subsequent decline in share prices.

“We had the initial gush that Trump was going to cure all the world’s economic problems,” Peter Boockvar, chief market analyst at The Lindsey Group, said in an interview. “Now reality is setting in that America first-type protectionism is not good for global growth.”

The only exception is Scorpio Bulkers Inc., which has continued to rally since the election and is up an additional 127% since then. The New York-based operator of a fleet of dry bulk carriers recently was upgraded by Gregory Lewis at Credit Suisse Group AG despite its shares doubling over the past six months.