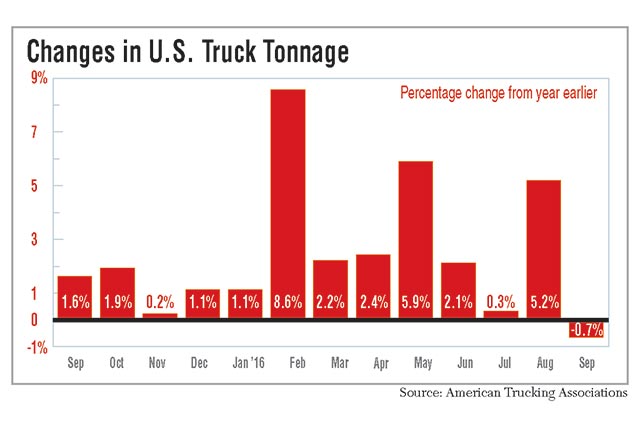 Truck tonnage in September continued to reflect a sluggish freight market, down 0.7% from the same month a year ago, reversing an August uptick and marking the first year-over-year decline in the American Trucking Associations index since October 2015.

The preliminary seasonally adjusted tonnage index for the month was 132.7, down from 140.8 in August and the record high of 144 in February.

Through September 2016, tonnage increased 3% on the strength of an 8.6% jump in February and the August results, according to the report.

“Adjusting for the larger ups and downs this year, as well as talking with many fleets, I currently see a softer than normal freight environment, which is likely to continue until the inventory correction is complete,” ATA Chief Economist Bob Costello said. “Looking ahead, the slow growth economic environment does not suggest that significantly stronger truck tonnage numbers are in the near term, either.”

“The economy was slower in July and August and started picking up in September, [and] it got a little bit better, but nothing is robust out there,” said David Parker, CEO of Covenant Transportation Group, which ranks No. 43 on the Transport Topics Top 100 list of the largest U.S. and Canadian for-hire carriers.

The nonseasonally adjusted index, which represents the change in tonnage actually hauled by the fleets, equaled 136.4 in September, compared with 143.8 in August.

“The Cass Freight Index shipments data in September disappointed, providing hindsight that August only gave us ‘false hope.’ September data is once again signaling that overall shipment volumes [and pricing] continued to be weak in most modes, with increased levels of volatility as all levels of the supply chain,” wrote Donald Broughton, author of the report and an analyst with Avondale Partners.

The Cass Truckload Linehaul Index, which measures per-mile rates, also dropped 3.5% last month to 123.0 compared with 127.4 the year prior.

But Jon Starks, chief operating officer at consultant FTR, counters that conditions in the trucking industry are heading in a positive direction.

“The spot-market data is showing us that as we move into the fourth quarter things will start to look a little bit better and more consistent,” Starks said. “And as we move in 2017, you should see potential for a more stable growing marketplace.”

FTR and Truckstop.com said that load availability, or the amount of loads posted on load boards, was up year-over-year during the last five weeks. The week of October 10 showed a 24.5% increase in load availability, too. Meanwhile truck availability was down about 13%, a sign that the capacity is tightening, and Starks believes, could soon reverse the 5% drop in spot market rates compared to 2015.

“Rates are getting closer and closer to even with last year’s number. Once that happens, which will probably be in the fourth quarter, it sets 2017 up to head in a more positive fashion,” he said.

“Pricing is going to have to start moving up whether it’s an overall total by customer or it’s lane specific by customer,” added Parker on a third-quarter earnings call. “There’s no doubt in my mind also that you’re going to have bids that come out and [that] lower their pricing. So we’ll all find out what kind of true partners we have with our customers.”

However, Cowen and Co. analyst Jason Seidl said he believes there needs to be an event to tighten capacity and increase rates.

“Those things could be a strong holiday season, for which we are not anticipating, or severe winter weather,” he said.

The National Retail Federation reported retail sales were up 3.5% year-over-year in September and rose 0.2% from August.

“This much-needed bounce in retail sales should allay some fears that the overall economy is losing its propulsion,” NRF Chief Economist Jack Kleinhenz said.

Costello countered that improving economic indicators won’t necessarily translate into stronger freight volumes in the near term. For example, he pointed to the sales-to-inventory ratio, which dropped from 1.41 to 1.39, but he said remains high overall.

The Industrial Production Index, which measures manufacturing, mining, electric and gas utilities output, is also down 1% year-over-year to 104.2. The base is 100, which represents production in 2012.

“Add it all up, and I expect, on average, that we move sideways through the fourth quarter.”