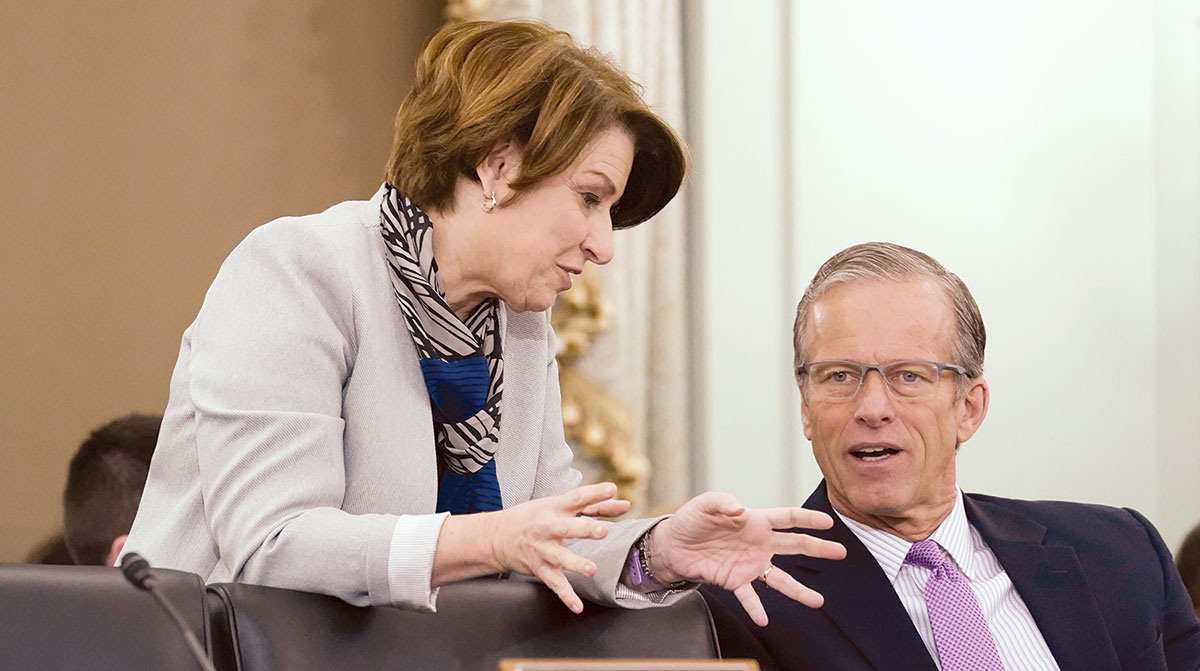 As supply chain woes continue to affect the commercial transportation industry, Sen. Amy Klobuchar called on colleagues to pass legislation meant to facilitate the movement of freight at the nation’s ports.

The senator insisted the Ocean Shipping Reform Act merits swift consideration in Congress so President Joe Biden is able to sign it into law. Klobuchar (D-Minn.), along with Sen. John Thune (R-S.D.), are key sponsors of the Senate-backed measure. House lawmakers have advanced a similar version. Congressional leaders signaled that consideration of a final version of the bill is fast approaching.

“I just want to get this done, as does Sen. Thune. Because I think the more the time ticks on, as we know, anything can happen in this town; things get delayed,” the senator said May 3 during a Commerce Committee hearing with Transportation Secretary Pete Buttigieg.

She added: “We have a winner in terms of pushing the shipping industry and actually showing that the Congress speaks with one voice when it comes to shipping rates.”

Specifically, the Ocean Shipping Reform Act aims to respond to ongoing supply chain pressures by taking aim at the Federal Maritime Commission. It would require carriers to issue certain reports to the commission each quarter, and it would pave the way for the registration of shipping exchanges.

Committee Chairwoman Maria Cantwell (D-Wash.), a staunch supporter of the Ocean Shipping Reform Act, pointed to ongoing concerns related to supply chains: “Every part of our supply chain is strained due to capacity issues. Since the middle of 2021, the number of containerships waiting for a dock at U.S. ports … more than doubled, peaking at 150 in early February.”

“To address these congestions, we must improve capacity, especially with freight shipments expected to increase 50% by 2050,” Cantwell said.

During an exchange with Klobuchar, Buttigieg said he acknowledged the need for adopting such supply chain-centric legislative policy.

“We know we’re in an urgent moment when it comes to our supply chains,” he said.

“In fiscal year 2023, we are poised to build on early progress with a president’s budget for the Department of Transportation that totals $142 billion, including $36.8 billion in advance appropriations provided by the [Infrastructure Investment and Jobs Act],” the secretary told the panel. “Safety remains our top priority, and our request includes funding to help address the crisis of deaths on America’s roadways, as well as to support the elimination of railroad grade crossings that are frequently blocked by trains, which will save lives and improve supply chains.”

As part of their USDOT budget, the Biden White House is requesting $23.6 billion for aviation modernization, $4.45 billion for major transit projects, $3 billion for safety programs at the Federal Highway Administration and $1.5 billion for infrastructure construction grants.

Congressional funding leaders have yet to schedule consideration of the fiscal 2023 federal appropriations measures.