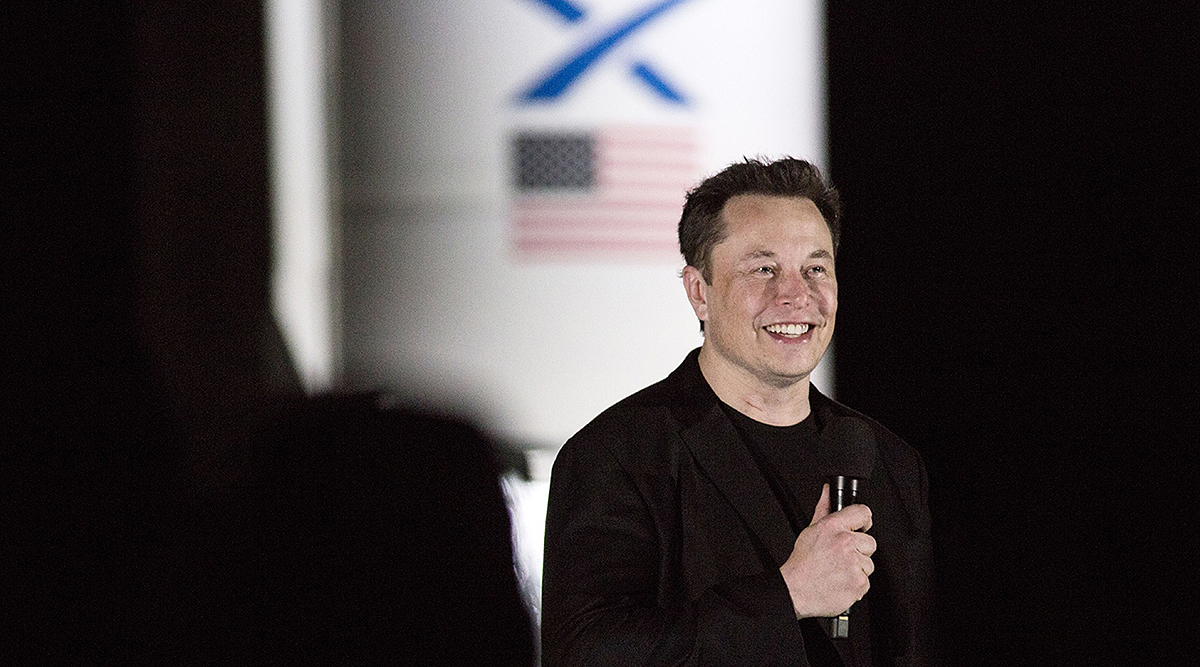 It seems like an unlikely marriage: Tesla, the world’s biggest electric automaker, moving its headquarters to Texas — where the oil and gas industry is etched in the state’s DNA and where, unless something changes, Tesla isn’t even allowed to sell its vehicles directly to customers.

On the other hand, Elon Musk — the high-profile leader of Tesla, SpaceX and a number of other companies — has steered many of his operations to the Lone Star State over the past few years, making Tesla’s headquarters merely the latest such move.

Musk has overseen development of a launch facility for SpaceX rockets on the Gulf Coast near Brownsville, picked Travis County as the site for Tesla’s next billion-dollar assembly plant and even became a Texan himself in late 2020 by relocating his personal residence to the state.

His actions, capped by the Oct. 7 announcement that Tesla is moving its headquarters to Austin, have prompted plenty of crowing among Texas politicians and economic development officials eager for examples of the state’s vaunted business climate prevailing over that of California — which had been Musk’s longtime base of operations — and other regions of the country.

“Texas is the land of opportunity and innovation,” Gov. Greg Abbott said in a written statement heralding Tesla’s headquarters announcement. 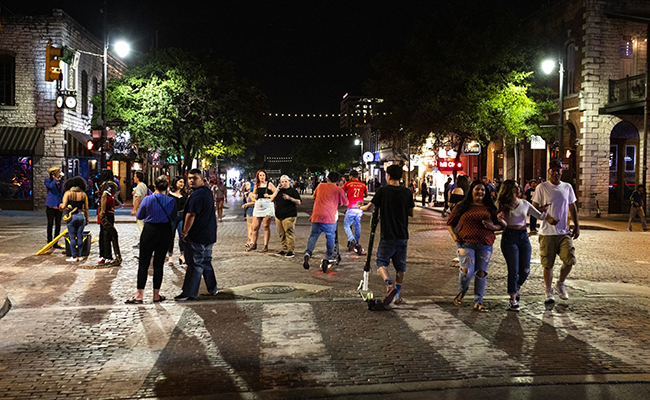 People gather on Sixth Street at night in downtown Austin on May 23, 2020. Austin is known for its nightlife. (Alex Scott/Bloomberg News)

There’s little doubt that Musk, who is considered one of the two richest people in the world with an estimated net worth over $200 billion, stands to benefit substantially from his move to Texas. The state doesn’t have an income tax — compared with California’s personal income tax rate of 13.3% for the highest earners.

Musk also engaged in a public spat with California officials in May 2020 — and first raised the prospect of pulling up stakes — over local coronavirus-related restrictions that shut down Tesla’s factory there for a short time. He’s likely to find officials who are more sympathetic to his coronavirus views in Texas, where Abbott has opposed various pandemic-related mandates and recently issued an order aimed at preventing private businesses from requiring that employees be vaccinated.

Still, California has been no slouch when it comes to fostering business activity and economic growth, actually outpacing Texas in the five years prior to the pandemic. California’s gross domestic product climbed by about 21% from 2015 through 2019, according to figures from the U.S. Bureau of Economic Analysis, compared with a 15% growth rate in Texas.

In addition, when Musk announced the Tesla headquarters relocation to Austin, he said that California will remain a big part of the company’s plans.

“To be clear, we will be continuing to expand our activities in California,” where Tesla has a major vehicle assembly plant in the city of Fremont in Silicon Valley, he said. “Our intention is to increase output from Fremont and (from Tesla’s Nevada battery factory) by 50%.”

That comes as no surprise to Marc Geller, a board member of the Electric Auto Association, who said Tesla is going to need all of its production facilities to keep up with strong demand for electric vehicles nationwide. 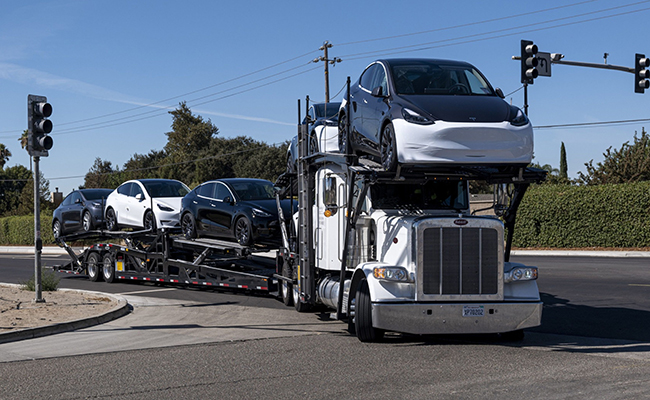 An auto carrier transports Tesla vehicles in Lathrop, Calif., where the mayor in September said Tesla broke ground in his city on what it calls a new “Megafactory.” (David Paul Morris/Bloomberg News)

“I think Tesla — more specifically Elon — liked the notion of just kind of spitting in the eye of California” by moving the company’s headquarters, Geller said. “But it’s still going to (have) a big presence in both states because Tesla’s going to be a really big presence in the country.”

The upshot is that it’s probably too simplistic to chalk up Musk’s Texas moves to just a big-name example of lower taxes and less stringent regulations proving irresistible. Instead, Musk has said that California’s high housing prices — which are a hardship for employees — are among the considerations that have played a role in his decisions, as is a strategic need to locate more of his operations outside of California for logistical purposes.

Musk called Tesla’s Fremont factory “jammed” during his Oct. 7 announcement regarding the company headquarters, and he said soaring housing prices in Silicon Valley have “made it tough for people to afford houses, and people have to come in from far away” to get to work.

In the Austin area, housing costs have been climbing substantially — but they have yet to reach California’s stratospheric prices. The median sales price of single-family homes in Santa Clara County, where Tesla’s headquarters had been located in Palo Alto, is about $1.6 million, according to the most recent figures available, compared with $527,000 in Travis County. Tesla and Musk have not yet said how many employees might be relocating to Texas from California as part of the headquarters move.

Still, that might not have mattered if Tesla hadn’t already been on the hunt for a site to build a new U.S. factory outside of California to more efficiently serve car buyers in the central and eastern portions of the country.

Tax breaks from Travis County and the Del Valle school district, valued at over $60 million combined, helped seal the deal to build the new factory in the Austin area. But Musk has previously made clear that the quality of life in Austin gave it a substantial edge over competitors, such as a site in Tulsa, Okla., that was a finalist.

“I guess a lot of people from California, if you ask them what is the one place you would move outside of California — it’s Austin,” Musk told Automotive News in August last year, shortly after announcing plans for the Travis County assembly plant. “That was a big factor.”

Likewise, millions of dollars in publicly funded incentives have helped lure SpaceX to Texas. But Texas has other attributes that have made it attractive to the private-sector space industry as well — such as a deep-rooted space tradition anchored by NASA’s Johnson Space Center in Houston.

SpaceX, meanwhile, already has a test facility near Waco but could be planning to expand in Austin, as it has recently posted advertisements for local job openings.

That would be in keeping with a number of other Musk-led ventures that have quietly moved to the Austin metro area during the pandemic.

The Boring Co., Musk’s tunneling company, has had a presence in the region since last year and has purchased land in Bastrop County. Neuralink, Musk’s neurotechnology company, has posted Austin-area job openings in recent months, while his private foundation, called the Musk Foundation, moved to Austin in the summer of 2020.

Dan Ives, an analyst with Wedbush Securities, said Musk is clearly fond of Austin, partly because it’s “a Silicon Valley in a ‘J.R. Ewing’ Texas” — a reference to the long-running TV drama “Dallas,” about a family steeped in oil riches.

“That’s why Musk is moving (Tesla’s headquarters) to Austin and not Dallas or Houston,” Ives said. “Austin has really become a next-gen technology city. It’s much more of a tech-centric city than the oil and gas ones that Texas ultimately made its name on.”

As for the decision to move the company’s headquarters out of California, Ives said the West Coast state’s high cost of living, including housing prices and taxes, played a big role. But he also said “growing tensions between Musk and (regulators with) the state of California and the city of Fremont” likely were factors.

Matt Holm, president of the Tesla Owners Club of Austin and a longtime Musk observer, agreed with that assessment, saying he thinks the die was cast when Musk first threatened to leave California nearly 18 months ago.

“When Elon said, ‘I am done with California,’ I am pretty sure he made up his mind then,” Holm said. “It was just kind of a formality at that point.”

Musk has chafed against California’s government bureaucracy. But he also has a big regulatory headache looming in Texas — the fact that Tesla is prohibited from selling its electric vehicles directly to buyers there because of a state law mandating that auto sales go through third-party franchised dealerships.

I think it’s going to be incredibly awkward, both for Tesla and for the government of the state of Texas, for (Tesla’s) cars to have to leave the state before they can be sold in the state.

As a result of the Texas regulations, Tesla is facing the prospect of having to ship vehicles built at its new Travis County factory across state lines first — so they don’t count as in-state sales — before bringing them back for delivery to customers in Texas. The company’s business model forgoes third-party franchised dealerships and instead relies on direct-to-consumer sales over the internet, a strategy that doesn’t comply with the Texas rules.

Tesla — and Musk himself — have tried for years to get the Texas regulations changed, but have been unsuccessful so far. A number of observers say they expect Tesla’s huge investment in the Travis County factory, combined with its recent headquarters relocation, to finally tip the political scales in Musk’s favor.

“I think it’s going to be incredibly awkward, both for Tesla and for the government of the state of Texas, for (Tesla’s) cars to have to leave the state before they can be sold in the state” once production at the factory begins, said Geller.

But the Texas Automobile Dealers Association, which has long defended the regulations, isn’t ready to throw in the towel.

“As we have said before, we believe the Texas Legislature has gotten it right time and time again that the franchised dealer system best serves Texas and Texans by promoting competition in sales and service and providing accessibility in all areas of the state,” said Jennifer Stevens, a spokeswoman for the dealers’ association.

“A top-three most innovative company in the world moves its headquarters to Texas —that’s going to pull some significant weight,” he said.