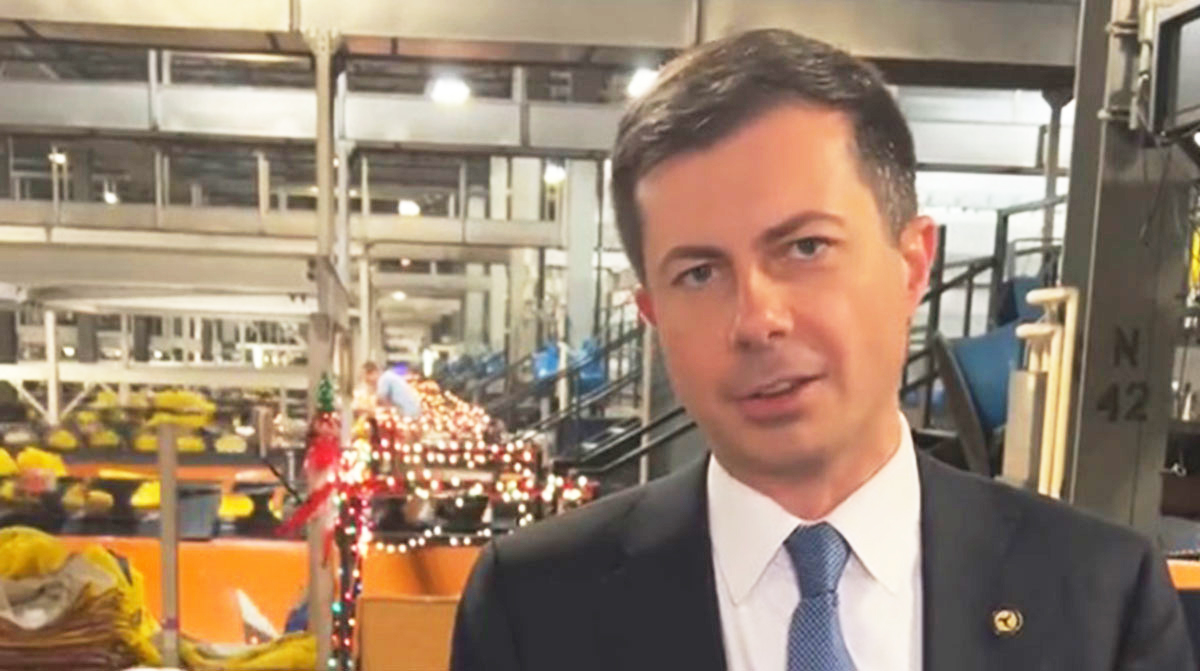 Saying reindeer “can only do so much,” Transportation Secretary Pete Buttigieg hailed UPS Worldport workers during a Kentucky stop where he rode with a truck driver and toured facilities after highlighting supply chain improvement compared with last holiday season.

Buttigieg thanked UPS employees at the 5.2 million-square-foot facility in Louisville for their efforts during the pandemic and for what they are doing now as he spoke about getting ready in a few weeks to gather with his family under a Christmas tree to open presents, some of which likely will be handled by Worldport.

With 12,000 employees, Worldport is the largest air hub at UPS and the world’s largest automated sorting hub. The company announced Nov. 18 it is starting construction of a second 275,000-square-foot aircraft hangar that will allow simultaneous parking for two 747-8s, the largest aircraft in the UPS fleet.

The @UPS Worldport is the world’s largest automated sorting hub — delivering essential goods and holiday gifts to people around the world.⁰⁰We spoke to Melissa to see all the magic that goes into delivering the holidays right here in Louisville, Kentucky. pic.twitter.com/B5xJOhrGb6 — TransportationGov (@USDOT) December 6, 2022

“Countless other physical items that make this time of year special for people will come through here,” Buttigieg said. “Over 3 million packages are processed here every day, which is what makes Worldport such a great place to talk about why supply chains are so important to our economy and daily lives.

“From medical supplies to toys and everything in between, things of great importance and great meaning move in your hands to the places and the people that they’re meant to reach.”

“Some of the Pacific Ocean shipping rates are down 80%, which ought to help lower prices that Americans are seeing at the store in a moment we’re fighting inflation with everything that we’ve got and helping people to get what they need without delays,” he said.

Praising UPS for having a driver safety rate more than two times better than the national average, Buttigieg noted that the company promotes a diverse workforce that creates opportunities for women and provides middle-class careers.

He announced that he would be riding with a UPS truck driver and supervisor to learn not only about the day-to-day work but also to discover “any lessons we can bring back to Washington to help make trucking the strongest career it can possibly be.”

We're hitting the road with @SecretaryPete and Dale, a UPS driver to learn more about how truckers are keeping our supply chain moving this holiday season pic.twitter.com/AmGQZ72YUh — TransportationGov (@USDOT) December 6, 2022

Buttigieg noted the accomplishments of President Joe Biden’s administration to revamp the nation’s transportation with federal investments in Kentucky.

As of Nov. 22, Kentucky is expected to receive over $3.5 billion in federal bipartisan infrastructure law funds for some 110 projects, according to a White House fact sheet. Allocations include $2 billion for roads, bridges, roadway safety and major projects, $34 million this year for ports and waterways, and $25 million in 2022 and 2023 to build a state network of electric vehicle chargers.

Buttigieg also mentioned supply chain improvements through federal investments in other states, such as building a new truck overpass above a freight rail line at the Port of Los Angeles to improve the efficiency of truck and freight movements.

“We’ve launched the Women in Trucking Advisory Board because we can’t leave half of America’s talent on the table and miss out on a generation of great drivers because women aren’t supported in the career,” he said. “We’re building new truck parking so that drivers can get safe rest.”

He also said the new federal entry-level driving requirements for commercial driver licenses resulted in 67,000 more CDLs being issued from January through September compared with the same period last year by “helping states cut out the red tape and increase their capacity” to issue the licenses.

During his tour, Buttigieg appeared in a short video on social media at Worldport describing his impressions.

“It is incredible what the people of this transportation workforce are making possible,” he said, “and I’m delighted to have a chance myself to see the incredible work that goes on to keep our supply chains going.”