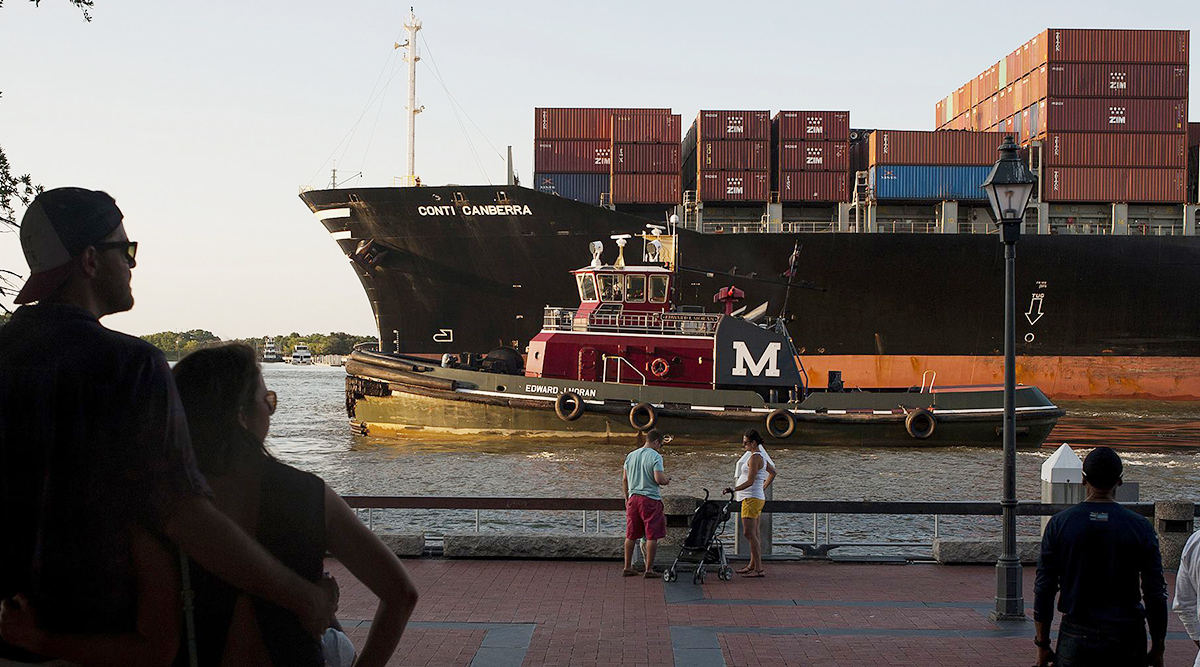 Pedestrians watch from River Street as a cargo ship and a tug boat travel into the Port of Savannah. (Ty Wright/Bloomberg News)

The U.S. Department of Transportation will allow the Georgia Port Authority to build storage for shipping containers at sites near the Port of Savannah using $8 million in unspent federal grants, part of a new plan to relieve supply chain bottlenecks at U.S. ports.

The Georgia Port Authority wants to build pop-up container storage at five sites in Georgia and North Carolina in order to free up space closer to the water. The new yards, funded by unspent grant money, will open in as soon as 30 to 45 days, administration officials said Nov. 9.

The administration’s ports plan, released ahead of President Joe Biden’s visit to the Port of Baltimore on Nov. 10, allows the facilities nationwide to steer leftover money from federal grants into other immediate projects. Meanwhile, applications for the first round of grants from Biden’s $1 trillion infrastructure legislation will open within 90 days after he signs the bill, the officials said.

Biden is waiting to sign the bill until members of Congress return to Washington and can attend the ceremony, a spokeswoman said Nov. 8.

Ports have been a focus of the White House as the U.S. supply chain struggles under record demand for imports by American consumers. Shortages and delays for goods ranging from food to cars to toys are causing Biden political trouble, as Republicans try to pin blame for the constrictions on his administration.

As part of the ports plan, the administration will also identify construction projects for the U.S. Army Corps of Engineers at coastal ports and inland waterways within the next 60 days — what the officials called a roadmap for spending $4 billion to repair outdated infrastructure and expand port facilities for larger ships.