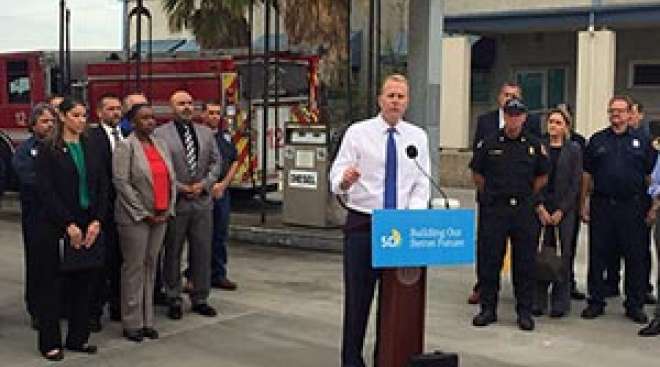 Joining a growing list of cities in California, San Diego announced Oct. 27 that its municipal vehicle fleet will become the largest in the nation to embrace renewable diesel — from street sweepers to refuse packers to fire trucks.

The city announced its adoption of renewable diesel as it continues to pursue its ambitious goal of cutting greenhouse-gas emissions in half by 2035 under its Climate Action Plan, which was adopted in December. Renewable diesel releases up to 80% fewer emissions than its traditional counterpart, according to state officials.

The city initially envisioned switching from diesel to compressed natural gas in its climate document but found that renewable diesel was cheaper and significantly cleaner for the environment.

“This small change will make a major part of our fleet greener overnight, creating more environmentally friendly vehicles that are cheaper to maintain,” Mayor Kevin Faulconer said in a statement. “By transitioning to renewable diesel, we’re significantly reducing the pollution caused by city vehicles that serve the public on a daily basis.”

The city can fuel up its 1,125 vehicles without skipping a beat using renewable diesel. All that staffers have to do is fill up and drive.

Made from vegetable oil, animal fats and agricultural waste, the alternative fuel is not to be confused with biodiesel, which must be blended with traditional diesel. Renewable diesel is refined to the same standards as petroleum-based diesel and can be transported and stored using the same infrastructure.

City officials estimate the changeover won’t cost the city much, if anything at all. The price is subsidized under the state’s low carbon fuel standard program and the federal government’s Renewable Fuel Standard.

“The cost is competitive to petroleum diesel and when looking back over a recent 12-month period, the fluctuations in fuel price were in alignment with each other,” said Alia Khouri, the city’s director of fleet operations.

Globally, the production capacity for renewable diesel has been on the rise — from 1.2 billion gallons a year in 2015 to a projected 1.9 billion gallons by 2018, according to a Lux Research report that monitors more than 1,800 biofuel facilities around the world.

“Renewable diesel is the fastest growing biofuel by capacity expansion,” said Victor Oh, head of bio-based materials and chemicals intelligence for the Boston-based Lux. “It’s the one that’s really driving what we would consider the novel fuels of the next-generation biofuels. Renewable diesel is really the hot one.”

UPS ranks No. 1 on the Transport Topics Top 100 list of the largest U.S. and Canadian for-hire carriers.

The state of California — which uses the fuel in its government vehicle fleet — is one of the biggest markets for renewable diesel because of its subsidy program. In the past 12 months, cities such as Oakland, Walnut Creek, San Francisco, Long Beach and Carlsbad made the switch for their vehicle fleets.

As the fuel has proven itself during recent months to be reliable, Oh said, one of the only drawbacks has been whether producers can secure a reliable supply of raw materials from which to make enough of the fuel — and do so consistently as demand grows.

“The biggest issues is being able to have a strong supply of whatever foodstock they’re using, whether that’s vegetable oils or waste oils,” Oh said. “And we’ve seen that [issue] in some cases being a limiting factor, in terms of being able to get a good supply for renewable diesel projection.”

San Diego officials, who said the city is getting its renewable diesel from Neste’s production facility in Singapore, echoed that sentiment.

“We wanted to secure future supply of this fuel type because there is a limited supply,” said Khouri, with fleet operations. “Although we are the largest city fleet to begin using renewable fuel, this fuel has been endorsed by the [state] for several years.”

Beyond agencies, people looking to fuel up their traditional diesel trucks with the cleaner alternative can find it at several stations in the county, including in Kearny Mesa and Chula Vista.