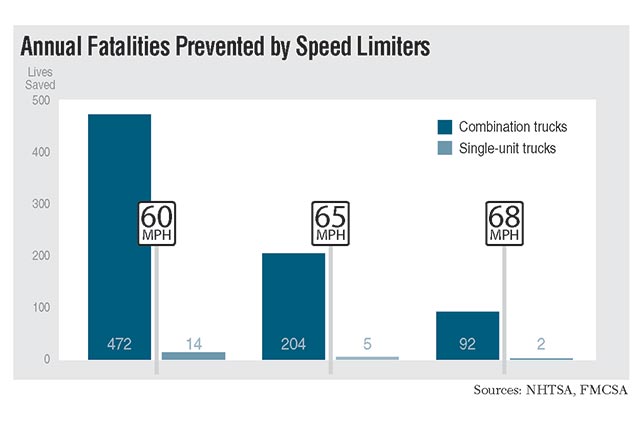 Although many drivers say that governing the speed of heavy trucks would create dangers on the highway, recent and past research studies dating to the 1970s generally have concluded that the overall benefits of speed limiters outweigh the potential increase in crashes caused by trucks moving slower than cars.

One of the more recent and comprehensive studies on speed differential was a 2012 federally funded report by researchers at the Virginia Tech Transportation Institute and American Transportation Research Institute that included data from 20 fleets and about 138,000 trucks, and analyzed more than 15,000 crashes.

The study also included a review of research on speed differentials.

“The positive findings in this study were consistent with the bulk of the literature on this topic indicating significant safety benefits associated with speed reduction, which can be achieved through the implementation of speed limiters,” the study concluded.

Research on the potential downside of speed deviations among vehicles that could occur due to the interaction of speed limiter- equipped vehicles and those without speed limiters “seems to be far outweighed by the significant safety benefits associated with a reduction in absolute speed afforded by speed limiters,” the study said.

The proposal, published Sept. 7, does not specify a speed that could be adopted in a final rule but suggests that setting limiters for new heavy trucks at 60 mph, 65 mph or 68 mph would save lives and reduce fuel use.

Ted Scott, director of engineering services for American Trucking Associations, said the federation is sticking to its support for a rule that would limit truck speeds to 65 mph but wants the restriction to include a national speed limit of 65 mph for all vehicles.

Scott said ATA, which is preparing formal comments on the proposal, is using research dating to the 1960s that maintains the larger the speed differential, the greater the potential for crashes.

ATA President Chris Spear earlier this month criticized the proposed rule as “flawed” since it is not accompanied by a national speed limit.

“He’s listening to his drivers, as I am,” Scott said. “If you listen to our guys, and I’ve talked to the folks on ATA’s America’s Road Team, and they all say it’s dangerous. There’s a great argument there that your theory is fine, guys, but our reality is the perception of our drivers.”

The Owner-Operator Independent Drivers Association opposes the proposed rule mostly based on the speed differential issue.

But as part of the cost-benefit analysis, the two agencies examined several studies that generally found the probability of being involved in a crash is a function of a differential speed “U-shape curve.”

“We believe that it provides a reasonable basis for the conclusion that limiting the speed of heavy vehicles to 65 mph or higher would not increase the probability of being involved in a crash, given that there are very few highway segments in the U.S. with a posted speed limit greater than 80 mph,” the NHTSA analysis said.

A 2009 study by Transport Canada said that speed limiters for trucks would generate some positive effects on the speed differential because it would decrease the variance within the trucking population and prevent trucks from overtaking cars traveling at or around the speed limit.

“There is no evidence that slightly increasing the mean speed differential by slowing down trucks to 65 mph will increase crash risks for trucks; and the increase in interactions between speeding cars overtaking speed-limited trucks and the associated risks are uncertain, calling for more research in this area,” Transport Canada concluded.

Jessica Cicchino, vice president of research for the Insurance Institute for Highway Safety, said research on speed differential so far is “pretty mixed.”

“But we do know that speed is a huge issue and that the average truck is 20 to 30 times heavier than a car,” she said. “It’s basic physics; it takes longer for a truck to stop at a high speed than it takes a car to stop. So even if speed differential might be an issue — which we’re not really sure about — we know that speed really is a safety issue.”