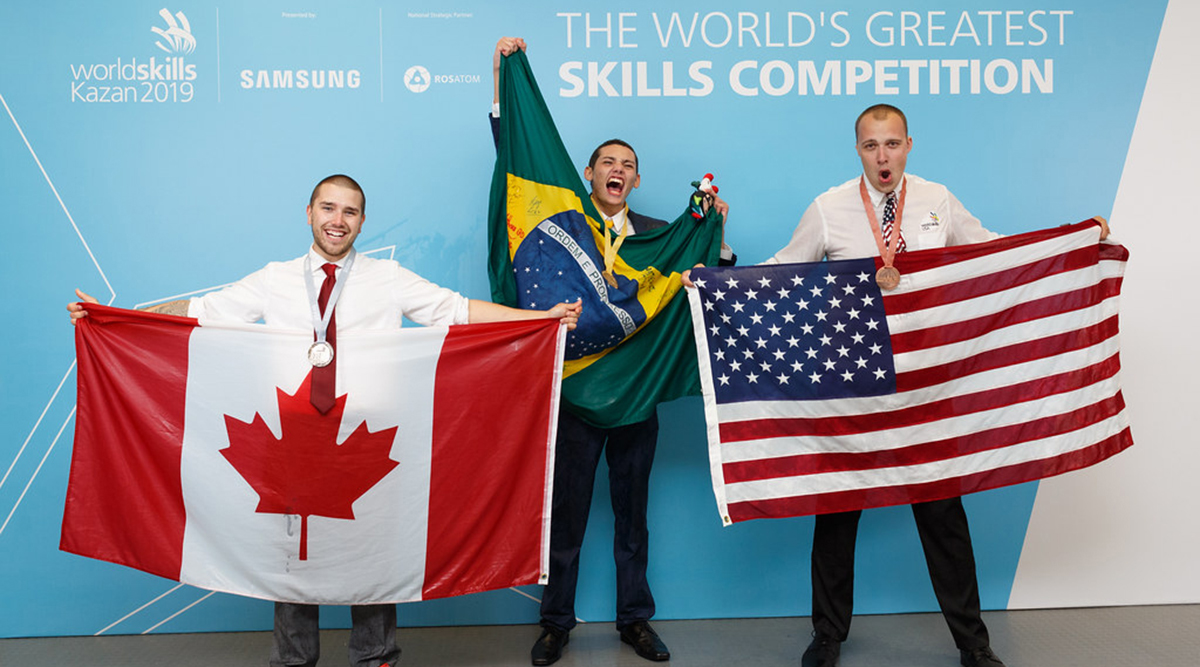 Medalists in the heavy machinery competition, with bronze medalist Ryan Meppelink on the right, celebrate and show their pride by displaying their countries' flags. (Himal Reece)

He also took the coveted Best of Nation prize after his score of 728 points led all U.S. contenders in various categories.

“It was a great honor to represent my nation, and I was hopeful I would take home a medal,” Meppelink told Transport Topics. “The competition was very tough, but I felt very good about my performance.”

Medals from the competition that started Aug. 22 were awarded to winners, top scorers among the national teams’ members and competitors with distinguished results during the closing ceremony at Kazan Stadium on Aug. 27.

The WorldSkills Competition is the flagship event and the biggest international vocational education and skills excellence event of WorldSkills, founded in Spain in 1950. The competition convenes every two years and involves more than 50 skills ranging from joinery to florists, hairdressing to electronics and more.

“This week demonstrates that we are on the right path, that with our young people, and the right attitude, we have the spirit and the tools to help them create the bright future they deserve,” WorldSkills President Simon Bartley said in a press release of the competition that marked its 45th year. 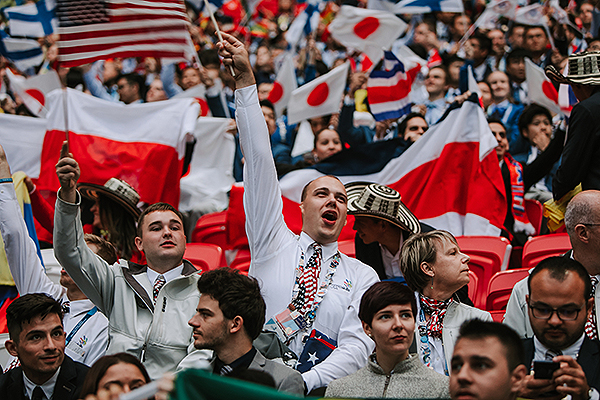 Meppelink was among those competing in the Heavy Vehicle Technology skill of the Transportation and Logistics section, which also included freight forwarding, aircraft maintenance, car painting, auto body repair and automobile technology.

Meppelink garnered the Best of the Nation award for the highest score among the 20 youths who represented the United States in various categories. Dupuis won Best of Nation for Canada’s team.

“A medal and winning the Best of the Nation award are beyond my expectations. I’m very pleased,” said Meppelink, 20, a senior at Ferris State University in Big Rapids, Mich.

Over the days of competing, contenders were tested and given 3½ hours to complete tasks on the equipment, including pulling oil samples and reading oil analysis reports, determining what a report says and the type of maintenance needed, and repairing electronic and mechanical problems.

“This competition is easily tenfold that of the national conference we are used to seeing at SkillsUSA in Louisville,” Meppelink said, referring to the association preparing American college, high school and middle school students to become world-class workers and leaders. “The number of competitors is less, but the competition is more detailed. It’s more in-depth, it takes longer and they expect more.”

“It’s everything you will see in the heavy-equipment industry,” added Meppelink’s coach, Thomas Wozniak, a diesel instructor at Madison Area Technical College in Madison, Wis.

He pushed Meppelink the whole way.

“I have been telling Ryan all week, that each station is like coming up to bat in a baseball game: Sometimes you swing and crush the ball, sometimes you get an out. You have to shake off the last inning because you're up to bat again, against a different pitcher,” he said. “Anticipate the next pitch and swing for a hit — hopefully hitting a home run.” 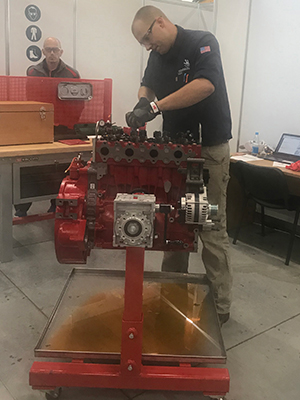 Meppelink gets to work. He won the Best in Nation award as the United States' highest finisher. (Tom Wozniak/Madison Area Technical College)

The pair came together in 2018 after a meeting for state directors who were asked whether there was a young person in the diesel industry strong enough to be coached to go up against the best at WorldSkills, Wozniak said.

Meppelink already had won SkillsUSA, and his name was the first mentioned. He had been competing at the state, regional and national levels since 2016.

Meppelink said he always would treasure the experience in Kazan, which kicked off with him carrying the American flag during the opening ceremony.

“It was life changing, breathtaking and unreal,” he said. “To hear the crowd of that size, about 40,000 people, going pretty nuts over seeing our red, white and blue, our stars and stripes — it’s not something I will soon forget.”

Meppelink said being tall made him the natural choice among his teammates.

“We actually had a team meeting the night before the opening ceremony, and our team leader said they needed someone to volunteer, so my hand went up pretty quick. And they said, ‘hey, you’re 6-foot-4, and you’d look pretty good carrying the flag.' "

The State of Heavy Duty Repair and Fleet Maintenance in 2022