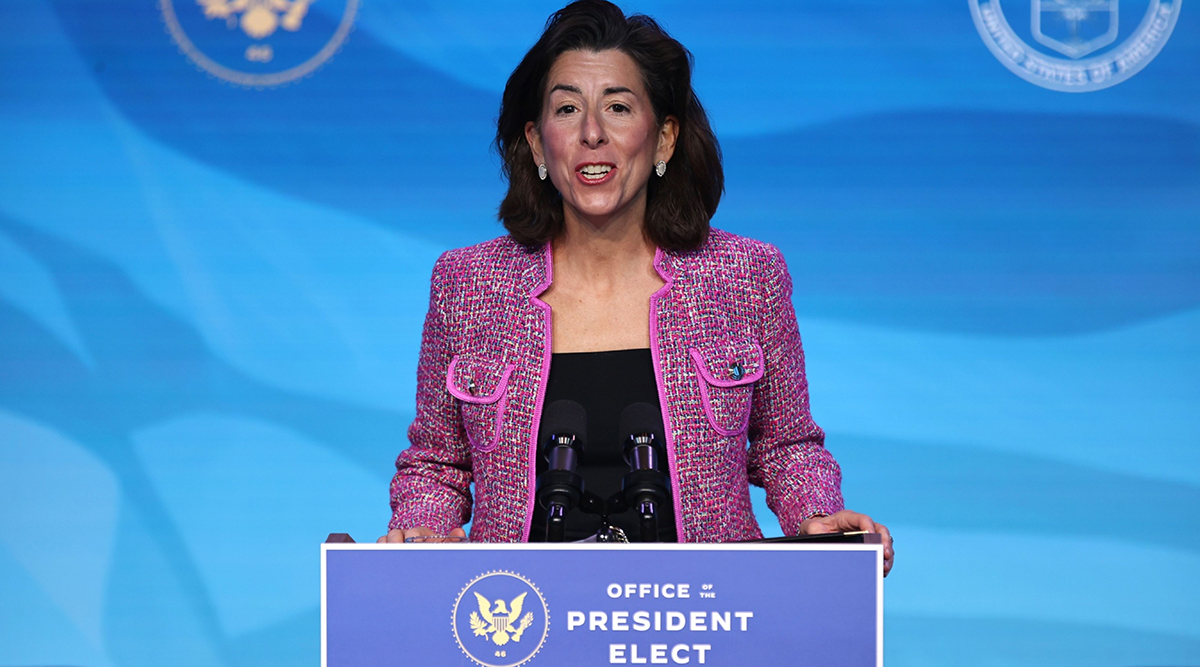 Gina Raimondo at the announcement of her nomination as Commerce secretary. (Chip Somodevilla/Getty Images via Bloomberg News)

The Senate approved Raimondo in a 84-15 vote on March 2. She’s expected to be part of a broad team pressuring China on issues from persecution of its Uighur minority in the western region of Xinjiang to trade practices that violate international commitments.

At her confirmation hearing in late January, Raimondo said the U.S. must take “aggressive” steps to help American workers compete against China while also investing to bring manufacturing back to the U.S.

Tapped to lead a department with wide-ranging international and domestic responsibilities, the former venture capitalist also underlined the need for “bold” action to help America’s tourism, travel and restaurant industries recover from the pandemic social distancing that crushed business.

“She knows how to invest in new technologies and things that are going to help us grow jobs for the future and she knows how to match up a workforce with those job opportunities,” Sen. Maria Cantwell, a Democrat from Washington, said March 2 in voting for her confirmation.

In leading the Commerce Department, Raimondo also will have oversight of the important Bureau of Industry and Security, which determines U.S. export controls. The Trump administration used the BIS to limit the ability of Chinese companies, including Huawei Technologies Co., to access key American technology needed for their products out of concern that it could be used for military purposes or to violate human rights.

Some Republicans voted against Raimondo after she refrained during her confirmation hearing from giving a direct answer as to whether she would commit to keeping Huawei and other Chinese companies on a restricted trade list, which requires U.S. firms to obtain government licenses if they want to sell to the companies.

In written responses to follow-up questions from senators, Raimondo said that she didn’t have any reason to believe that Huawei, Semiconductor Manufacturing International Corp., Hangzhou Hikvision Digital Technology Co. and others shouldn’t be on the list.

Republican Texas Sen. Ted Cruz voted no on Raimondo, criticizing her answers as too weak and accusing the Biden administration of a pattern of embracing the Chinese Communist Party.

Raimondo, 49, has been in public office in her home state since 2011, when she was sworn in as state treasurer. Before that, she spent more than a decade working in venture capital, including co-founding Point Judith Capital.

As governor of the Ocean State, Raimondo approved the “RhodeWorks” infrastructure funding program, consisting of truck-only tolls, which was opposed by the trucking industry.

Raimondo was national co-chairwoman of Michael Bloomberg’s 2020 presidential campaign. Bloomberg is the founder and majority owner of Bloomberg LP, the parent company of Bloomberg News.