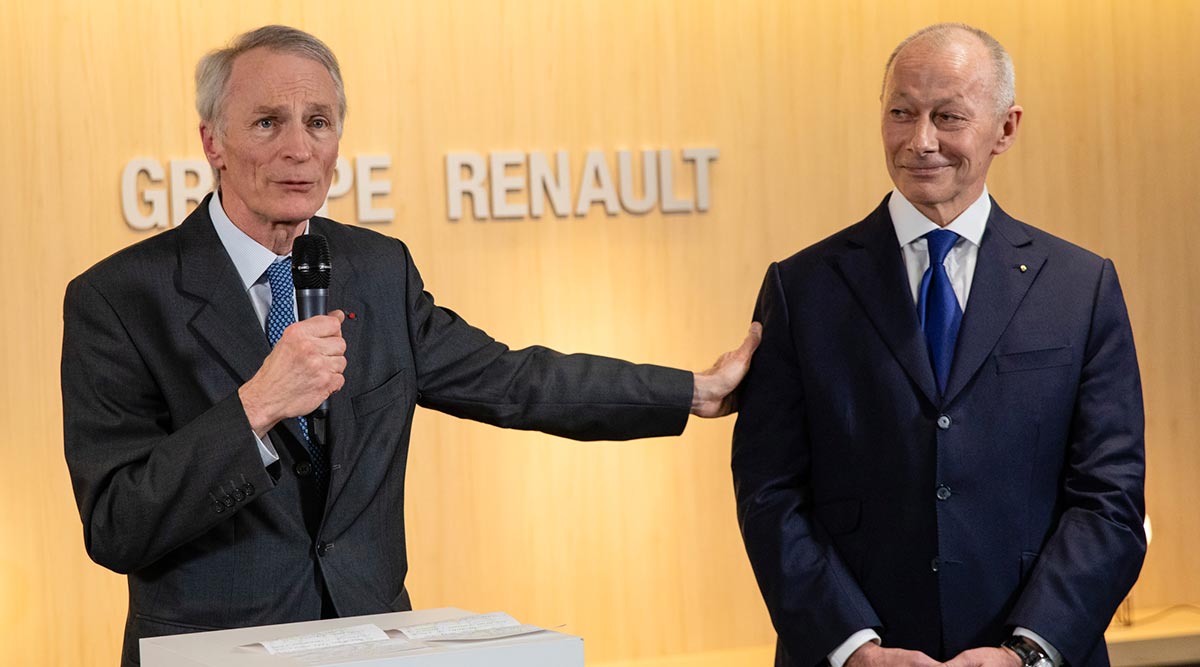 Jean-Dominique Senard, CEO of Michelin & Cie., left, makes a statement after being named chairman of Renault SA as Thierry Bollore, CEO of Renault SA, looks on during a news conference. (Marlene Awaad/Bloomberg News)

Renault SA named a new leadership team hours after Carlos Ghosn resigned as chairman and CEO from a prison cell in Japan, where he has been held for more than two months.

Michelin CEO Jean-Dominique Senard, 65, was appointed chairman of France’s largest carmaker, Renault said in a statement Jan. 24. He’ll be given full responsibility for managing the alliance with partners including Nissan Motor Co. Thierry Bollore, 55, was named CEO, a role he has held on an interim basis since shortly after Ghosn’s arrest in November.

Ghosn’s downfall has shaken not only Renault but also the alliance the globe-trotting executive held together for two decades. For Senard, bridging the corporate and cultural gaps between the companies and navigating the political crosscurrents in France and Japan will be among the biggest challenges. Mitsubishi Motors Corp. joined the partnership 2016.

The new management team’s first priority “is to consolidate the alliance between Renault and Nissan,” French Finance Minister Bruno Le Maire told Bloomberg TV’s Francine Lacqua in an interview Jan. 24 at the World Economic Forum in Davos, Switzerland. “I am sure the alliance will stay.”

All three companies have said the partnership is essential to remain competitive at a time of costly changes sweeping through the industry, from the decline of diesel cars to the enormous investment required for electric and autonomous vehicles. Ghosn was widely credited with holding the two-decade alliance together, even as other automotive combinations — like DaimlerChrysler — came and went. 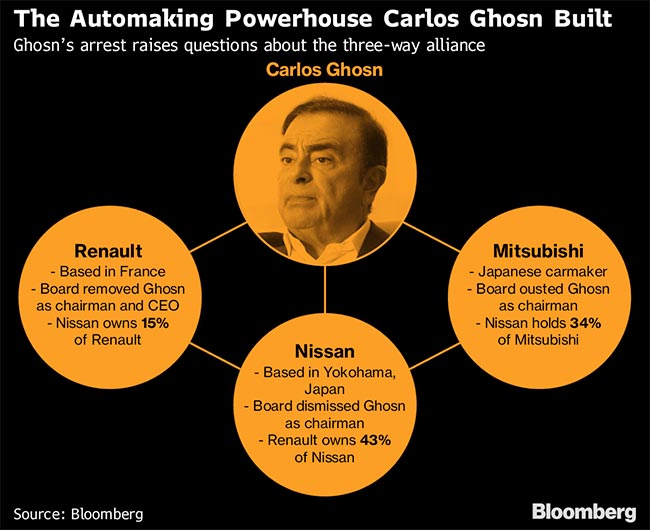 For Ghosn, the resignation completes a fall from grace that began when police boarded his private jet shortly after it touched down at Haneda airport. He has been in custody ever since, accused of financial misdeeds at Nissan that include understating his income by tens of millions of dollars and transferring personal trading losses to the company. If convicted, he could face decades in jail. Ghosn has denied wrongdoing.

Nissan and Mitsubishi ousted Ghosn as chairman days after his arrest. Renault kept him on at the company, and as head of the alliance, citing the principle of presumption of innocence. But as Ghosn’s incarceration dragged on and new allegations emerged, the carmaker and its most powerful shareholder, France, chose to move on. His lawyers have acknowledged he may stay in custody until his trial, which could be six months away.

Senard brings change of style to Renault. Cordial and soft-spoken — some would say austere — his demeanor contrasts with Ghosn’s bigger-than-life persona. He’s also in the good graces of the government, which had a sometimes rocky relationship with Ghosn. French President Emmanuel Macron called Michelin a “model company” last year, praising it for its frequent dialogue with unions.

Bollore had been seen as Ghosn’s heir apparent as CEO since last February, when he was promoted to chief operating officer, and had been handling many of the day-to-day duties at Renault even before his boss’ arrest. At that time, Ghosn pledged to use his final four years to focus on a plan to “make the alliance irreversible.”

Bollore, who is from Brittany, joined Renault in 2012 from car-parts supplier Faurecia SA, where he rose through the ranks to become vice president with responsibilities for global industry, quality and packaging. He started his career at Michelin, working there for several years at the same time as Ghosn, who called him a “good candidate” to become Renault CEO.