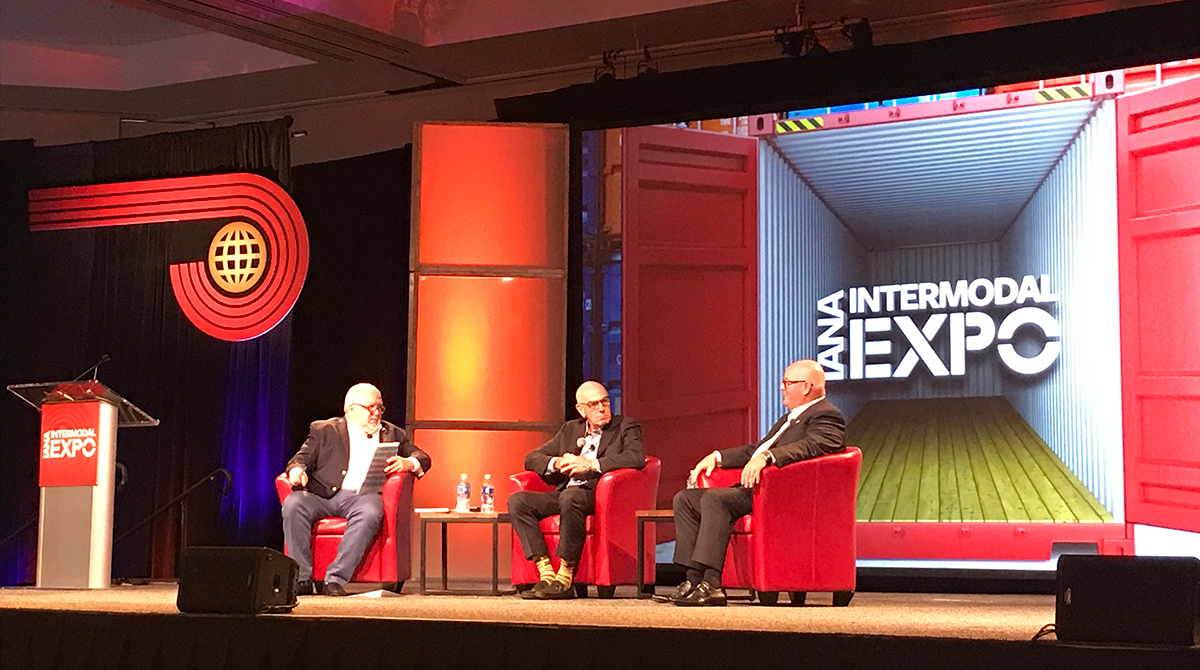 From left to right: Tony Hatch, a consultant with ABH Consulting, moderates a panel discussion on precision scheduled railroading with Heller and Reardon. (Mindy Long/Transport Topics)

LONG BEACH, Calif. — Rail and intermodal providers said they are increasing speed and efficiency to become more competitive, and technology is helping them improve operations.

“We’re thinking about what is needed to compete against the truck,” Keith Reardon, senior vice president of consumer product supply chain growth at Canadian National Railway, said here at IANA Intermodal Expo 2019. “What do we need to do to stay relevant to the different ways products are moving? If you do those things right, you’ll get more than your fair share of what is going on in the market.”

Maryclare Kenney, vice president of intermodal and automotive at CSX, said the railroad has gone from a hub-and-spoke model to point-to-point to get reliable deliveries.

“The focus today is on the improved service side,” Kenney said, noting that CSX had service issues in the past. 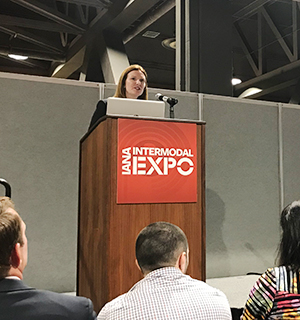 She told attendees that in spring 2017, CSX embarked on a journey to transform the network and has shown year-over-year improvement on dwell time. “Today, we know we need a consistent, reliable network,” she said.

Dwell time at CSX dropped below nine hours for the first time in the first quarter, and intermodal velocity is up to 27 mph, with Kenney saying velocity has reached “record levels.”

CSX also has changed how it benchmarks performance. In 2017 the Jacksonville, Fla.-based railroad considered performance a success if it hit a four-hour window 90% of the time. The rail’s new measure is trip plan compliance, and each box has a plan that is measured down to the minute. In the second quarter of 2018, 62% of trip plans hit their target. Today it is at 93%.

Jeffrey Heller, vice president of intermodal and automotive at Atlanta-based Norfolk Southern Corp., said autonomous trucks likely are coming, and the railroads will need to keep their cost structure lean to compete.

“We are doing that now with [precision scheduled railroading] to improve costs to be competitive,” he said, adding that intermodal terminals are becoming ripe for more autonomy.

CN has implemented autonomous inspection cars that travel at track speed and search for flaws using lidar and ultrasound.

“It does a much better job,” CN’s Reardon said. To meet regulations, the Montreal-based railroad also uses humans to travel along at 10 to 15 mph and examine tracks.

CN also has added technology to its inspection portals, which have hundreds of cameras taking thousands of pictures a minute, Reardon said. An algorithm helps identify needed repairs, so the carman is spending more time fixing and less time inspecting. That means cars are out of service for less time, Reardon said.

BNSF Railway, based in Forth Worth, Texas, has an autonomous autostack that can stack units three cars high to move them throughout the yard, said Tom Williams, group vice president of consumer products at BNSF.

Larger vessels mean that to be big-ship ready, the supply chain has to be big-train ready, Williams said. To help expedite movements, BNSF has created its RailPass mobile app. “Drivers have pre- and post-gate reporting and can see turn time estimates,” Williams said

BNSF also has RailPass-only lanes, and Williams said if BNSF knows the actual appointment needs, it can streamline movements.

CSX has enhanced the driver experience with its XGate app, which had been downloaded 26,000 times. Drivers can use the app to do pre-work and make reservations, speeding up their time spent in the terminal. 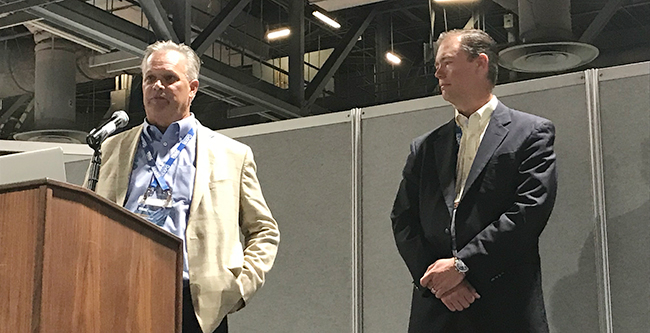 Schneider, which is based in Green Bay, Wis., and ranks No. 7 on the Transport Topics Top 100 list of the largest for-hire carriers in North America, has rolled out tracking devices from SkyBitz in nearly all of its containers and trailers.

For drivers, one of the biggest frustrations is going to find a trailer that isn’t there. Tracking devices can helping by quickly locating equipment. They also can track an asset’s status, so drivers know if it is loaded or empty, said Chris Plaat, senior vice president and general manager of BlackBerry Radar.

“Visibility can improve efficiency and reduce disruptions,” Plaat said. “Many companies throw more assets at the problem rather than investing in technology that can help them better utilize their assets.”

The technology has an ID sensor that can capture tractor and trailer identification. “If there is a problem, you can catch it before it leaves,” he said.

Kenney said the improvements will help as CSX takes on its major competitor, which is the truckload market. “We think there is opportunity to convert intermodal from over-the-road,” Kenney said. “In the past the service wasn’t good enough to compete.”