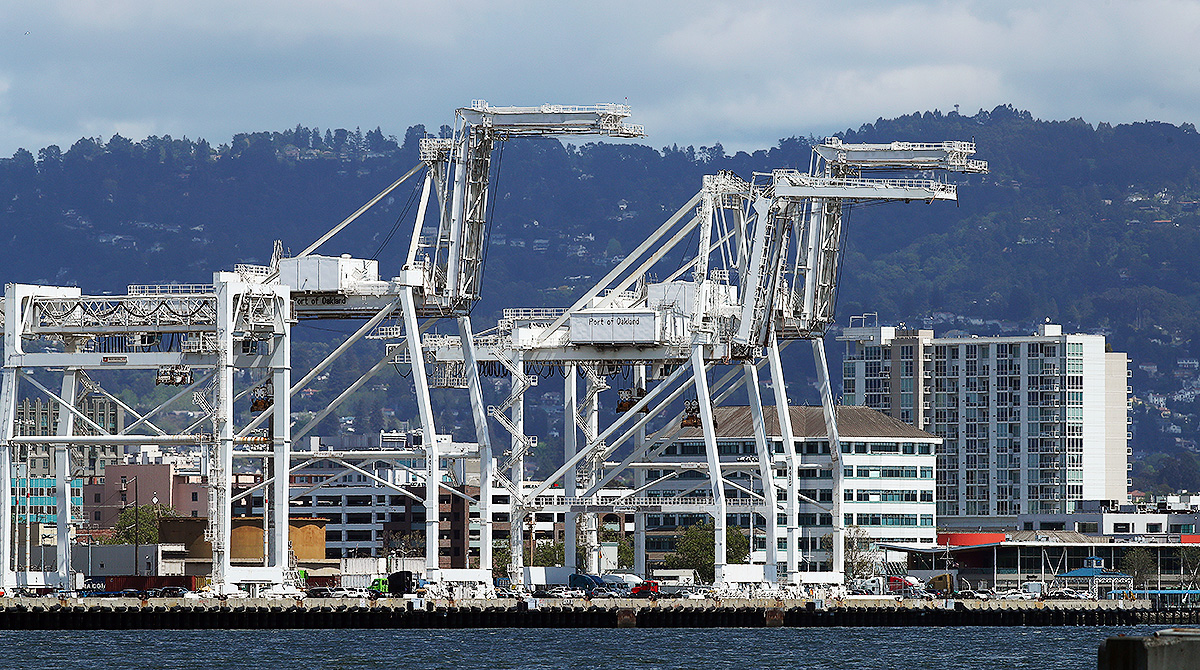 Howard Terminal at the Port of Oakland by Ben Margot/AP.

OAKLAND, Calif. — The Port of Oakland’s board of commissioners May 13 unanimously approved an exclusive negotiating term sheet that would give the Oakland A’s four years to obtain land use permits, conduct an environmental review and do other preparatory work needed to eventually lease the 50-acre Howard Terminal — one of six marine terminals at the port.

Some maritime business representatives and longshoremen have denounced the decision, fearing that putting a ballpark next to a busy port will affect business and prompt longtime tenants to leave, costing jobs.

To quash those fears, Port of Oakland officials sent letters to the port’s 85 tenants as well as shippers around the world confirming that it is committed to increasing the port’s shipping capacity.

Port spokesman Mike Zampa said that the maritime division is expecting a record number of containers to go through the port over the next five years. In 2018, the port’s cargo volume reached 2.4 million containers, and by 2022, the port expects to handle 2.6 million containers.

The port’s addition last year of a 280,000-square-foot temperature-controlled distribution facility and the development of a 180-acre logistics complex at the former Oakland Army Base allows the port to be able to handle record cargo volumes, and also makes the port more attractive to shippers who could opt to ship elsewhere, Zampa said.

“It’s the board’s belief that you can develop Howard Terminal for a new and diverse use while simultaneously building out all these logistics capabilities and continuing to grow the port’s maritime volume,” Zampa said.

Port officials declined to release the letter to the Bay Area News Group on May 16, saying that not all of the port’s 85 tenants had received it by then. Still, they issued a news release that day announcing that letters had been sent.

The letter said that the proposed ballpark could “enhance the port’s commercial real estate portfolio,” and that the provisions were included in the term sheet that would address potential impacts, according to the release.

Since the initial positive response to our preliminary concepts for the new Howard Terminal ballpark at Jack London Square, we’ve continued to meet with public officials, fans, and community members to gather more input and refine our designs. The result is a new circular shape. pic.twitter.com/RZBscg3yIR

The term sheet allows the port to enlarge the Inner Harbor Turning Basin, calls for the A’s to create a buffer zone between any proposed housing and nearby seaport businesses’ footprints, and requires the A’s to submit a “comprehensive transportation and circulation” plan to the port before it would give the team final approval to build the stadium.

The commissioners added a last-minute amendment to the term sheet May 13, calling on the A’s and the seaport businesses to join forces and negotiate standards that would ensure the project does not hurt or otherwise interfere with port operations.

Mike Jacob, vice president of the Pacific Merchant Shipping Association, a trade group representing marine terminals and vessel operators, said businesses are still worried that the proposed ballpark and adjacent housing would have a “disruptive impact” on the port. Jacob sees the amendment to the term sheet as a good thing, though, since it “forces that the entire process focus on operational impacts.”

Whether the project moves forward, Jacob said, the port must first identify any potential problems that businesses could face because of it and put solutions on the table.