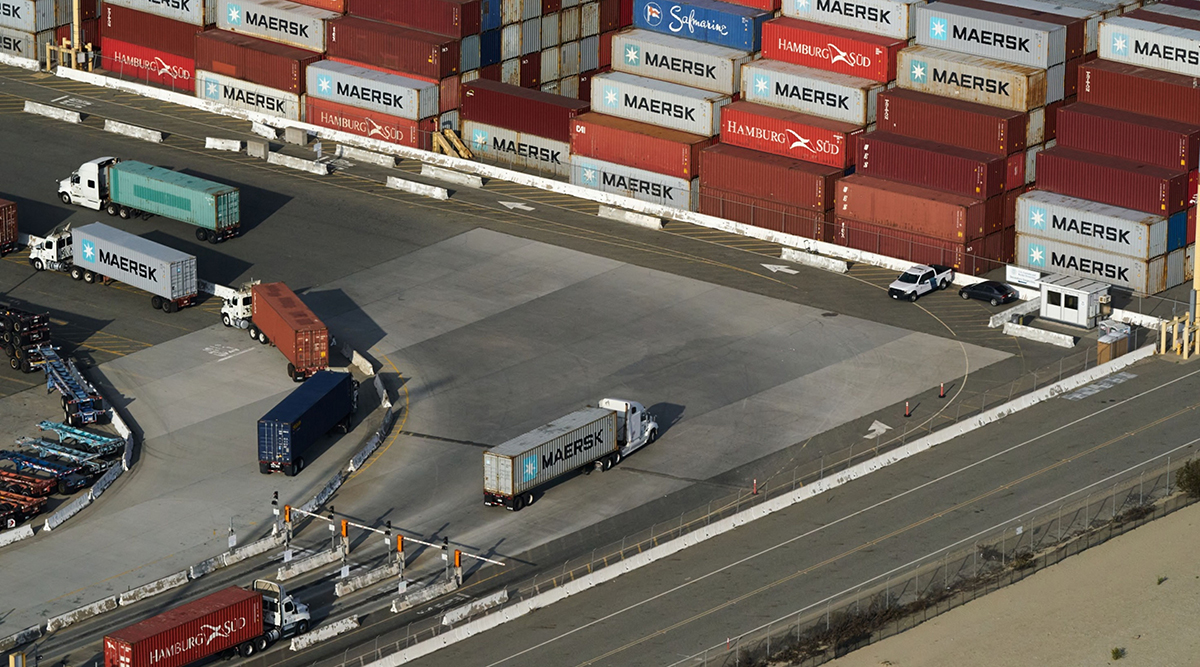 Trucks at the Port of Los Angeles. (Bing Guan/Associated Press)

The Port of Los Angeles, the U.S.’s largest for container traffic, has deferred a plan to charge ocean carriers that fail to clear empty containers off the docks and is consulting with the logistics industry on alternatives on how to cut the backlogs.

The proposed $100 daily penalty — which would have kicked in at the end of the month — may have “unintended consequences,” because some of the empty containers that have been sitting the longest may be buried under others, costing time “that our marine terminals simply don’t have to waste right now,” port Executive Director Gene Seroka said Jan. 13. He was speaking in a presentation to the Harbor Commission, which was scheduled to vote on the fee at the meeting.

U.S. supply chains have strained under unprecedented demand, worker and truck-chassis shortages and a shift to buying more material goods as Americans avoided travel and social outings over the course of the pandemic. The terminals at Los Angeles received record amounts of imports in 2021 and despite efforts by the port and the Biden administration, long delays continue there and at neighboring Long Beach, which combine to handle 40% of the U.S.’s inbound containers.

Seroka said the fee proposal was intended to get the industry talking and it had been successful in doing so.

Truckers, represented by the Harbor Trucking Association, have for months complained about restrictions on empty-container returns at major ports, saying these are among the top issues that need fixing to help ease U.S. supply chain bottlenecks.

Speaking before the Jan. 13 meeting, HTA Chief Executive Officer Matt Schrap said it’s encouraging that there seems to be an openness to alternative ideas for fixing the situation.

Empty containers “need to be moved out, while not negatively impacting American exports and assisting the truck driving community so they could bring those empties back with a chassis and get the next round of imports,” Seroka said.

The HTA has flagged port restrictions on empty-container returns as contributing to the backlogs. Trucks need a chassis to collect import-laden containers, but unless they bring an empty container to free up the chassis, they’re unable to move the import, he said.

While the number of empty containers on Los Angeles docks had fallen to about 72,000 from about 90,000 before the holiday break, getting under 70,000 had proved to be “a very strong point of resistance,” Seroka said.

The Harbor Commission voted unanimously to extend authorization of a separate fee on any imported containers sitting on the docks for too long, according to a statement from the Port of Los Angeles. The so-called container dwell fee was first announced on Oct. 25 — but was never implemented — and was set to expire after 90 days.

The commission also amended the dwell fee so import containers moving by truck or rail can be charged the fee penalty after nine days, matching the period for containers bound for trucks and up from six days previously.

While the twin ports of Los Angeles and Long Beach haven’t yet implemented the charge, its threat has reduced the number of import boxes sitting on marine terminals since late October by more 60%, the ports said this week.