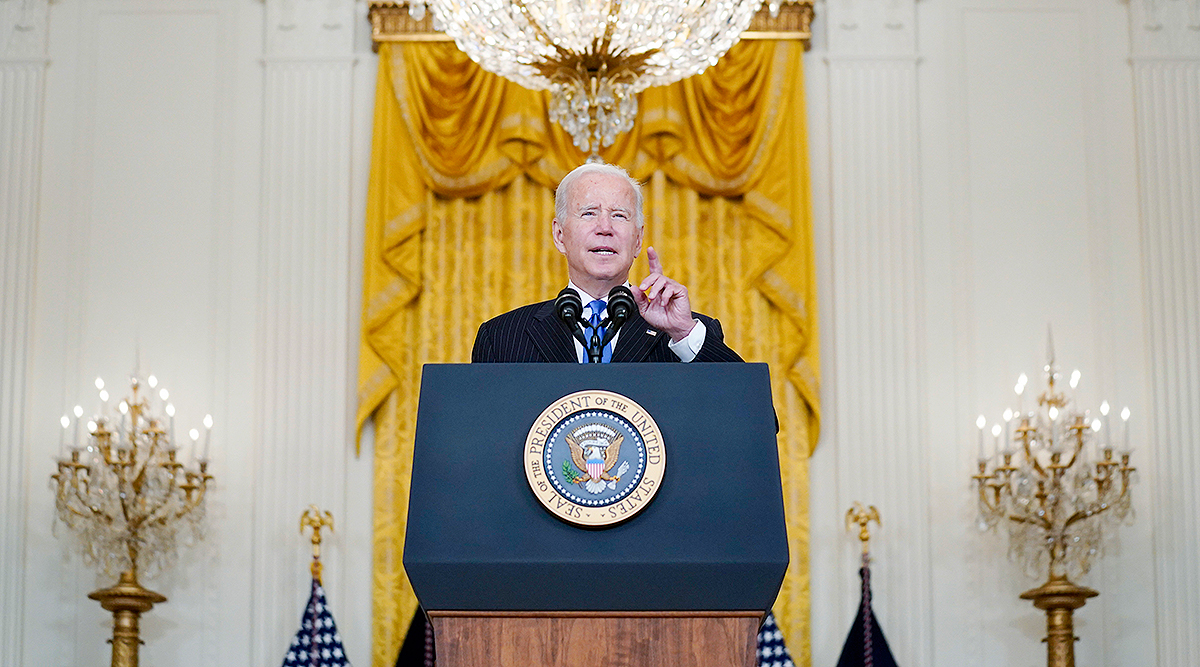 President Biden gives an address from The White House on plans to tackle the supply chain crisis. (Evan Vucci/Associated Press)

Some of the nation’s largest carriers and the operators of the country’s busiest port are joining a White House effort to ease crippling bottlenecks that are vexing supply chains through expanded service offerings that include, in some cases, 24/7 operations.

The Port of Los Angeles, the nation’s busiest, will take steps to begin operating 24/7, adding 60 additional hours a week of operation. The move comes as the crush of holiday shopping rapidly approaches, with Black Friday a little more than a month away.

UPS will increase its use of 24/7 operations and enhance data sharing information at ports, which could improve its capacity by 20% at ports, the company said.

FedEx said it will expand night hours with changes in its trucking and rail schedules to increase the volume of containers at ports, which could double the amount of cargo it moves at ports at night.

Walmart said it will increase its use of night hours, which could mean moving 50% more cargo over the next several weeks.

The announcements came Oct. 13 following a White House meeting between supply chain stakeholders and President Joe Biden, and follows a decision three weeks ago by the adjacent Port of Long Beach to add hours to keep up with the backlog of cargo.

“This is the first key step toward moving our entire freight, transportation and logistical supply chain nationwide to a 24/7 system,” Biden said. “Traditionally our ports have only been open during the week, Monday through Friday, and they are generally closed down at night and on weekends. That will almost double the number of hours that the port is open for business.”

The president said the announcement came after several weeks of negotiations with the longshoremen’s union and other groups. He noted that the movement of freight is 25% faster at night, compared with the day shift.

“Operational details are being discussed and worked out with the supply chain stakeholders,” Port of Los Angeles Executive Director Gene Seroka said. “The significance of today’s announcement is the commitment from industry leaders responsible for moving goods on behalf of American consumers and businesses to open up the capacity needed to deliver.”

Los Angeles and Long Beach account for 40% of all shipping containers entering the United States. As of Oct. 11, there were 62 ships berthed at the two ports and 81 are waiting to dock and unload, according to the Marine Exchange of Southern California.

American Trucking Associations President Chris Spear attended the White House meeting along with other officials from the U.S. Chamber of Commerce, the National Retail Federation and several other industry representatives.

The actions I’m taking on supply chains are aimed at making sure you have what you need – whether that’s presents that arrive on time or a kitchen appliance. We’re working around the clock to speed things up.pres pic.twitter.com/DRIcLOQqYp — President Biden (@POTUS) October 14, 2021

“You can’t just look at the ports and fix that, and think the whole thing is going to work,” Rogers said. “There are all sorts of pieces to this and just looking at the bottlenecks at Los Angeles and Long Beach, are not going to do a lot. You have to address the whole system and the structure of all of the pieces.”

Still, port leaders and the White House are optimistic.

“We have a lot of work ahead,” Seroka said. “The Port of L.A. is called America’s Port because cargo we handle reaches every corner of the country. In the days ahead, we are committed to continuing to ... ensure the supply chain delivers for the American people.”

“Today’s announcement has the potential to be a game changer, I say potential. But all of these goods won’t move by themselves.” Biden said.