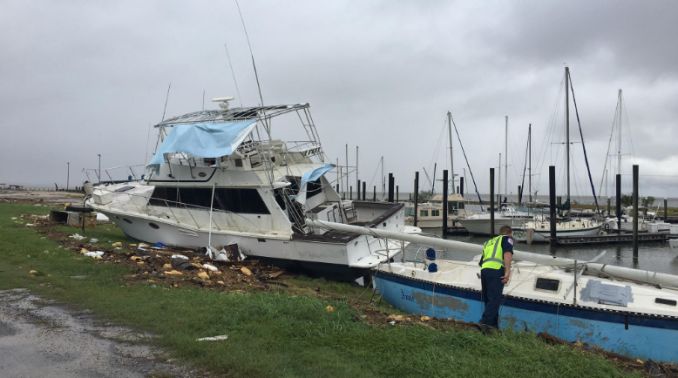 The Port of Corpus Christi remains closed after an oil drilling ship broke from its mooring Aug. 26, sank a tugboat and beached in the ship channel’s entrance to the Gulf of Mexico.

The port, which usually moves $100 million worth of goods a day, shut down midday Aug. 24 before Harvey reached landfall as a Category 4 hurricane north of Corpus Christi the night of Aug. 25. It can’t reopen until the Army Corps of Engineers inspects it and the beached ship is removed, and that’s not happening any time soon.

Andrew Smith, the Corps’ resident engineer for the Corpus Christi office, said the Corps will finish its survey of the area before Sept. 4, which is when Port officials hope to reopen.

On Aug. 26, a 449-foot drill ship owned by Houston-based Paragon Offshore broke free from its moorings, sank one of two tugboats assigned to hold it in place and disabled the second one as Hurricane Harvey barreled down on the Texas coastline, said Burt Moorhouse, the general manager of Gulf Copper Harbor Island. Gulf Copper, a private dock where the ship was anchored, sits next to the Port Aransas ferry crossing.

The crews of both ships have been “accounted for and are safe” and the ship appears to be stable, Paragon said in a statement Aug. 28. The Coast Guard was able to rescue the crew of the sunken tug, and a video on Twitter showed the tugboat half submerged with a man being pulled from the wreckage.

The Army Corps of Engineers’ Galveston District is based out of the barrier island community of Galveston, which is east of Houston. Some areas of Harris County, where Houston is located, have received over 30 inches of rain in the last 72 hours due to the remnants of Hurricane Harvey, according to the National Weather Service.

AAA estimated Aug. 28 that gasoline prices across the country increased by 4 cents from a week ago, the largest increase this summer and driven by Harvey’s disruption of roughly a quarter of U.S. refining capacity.

Valero Energy Corp. closed three refineries in advance of the storm — two in Corpus Christi and one in Three Rivers — which remained shut down Aug. 28. The company is continuing to operate refineries in Houston and Texas City.

San Antonio’s NuStar Energy said Aug. 28 that its Corpus Christi terminal was still without power. Some tanks at the 3.4 million barrel terminal in Corpus sustained minor damage to their insulation during the storm, said NuStar spokesman Chris Cho on Saturday.

“Had Harvey had hit 20 miles to the south we would be having a much different situation ... we were very lucky. We dodged a major bullet there,” he said.