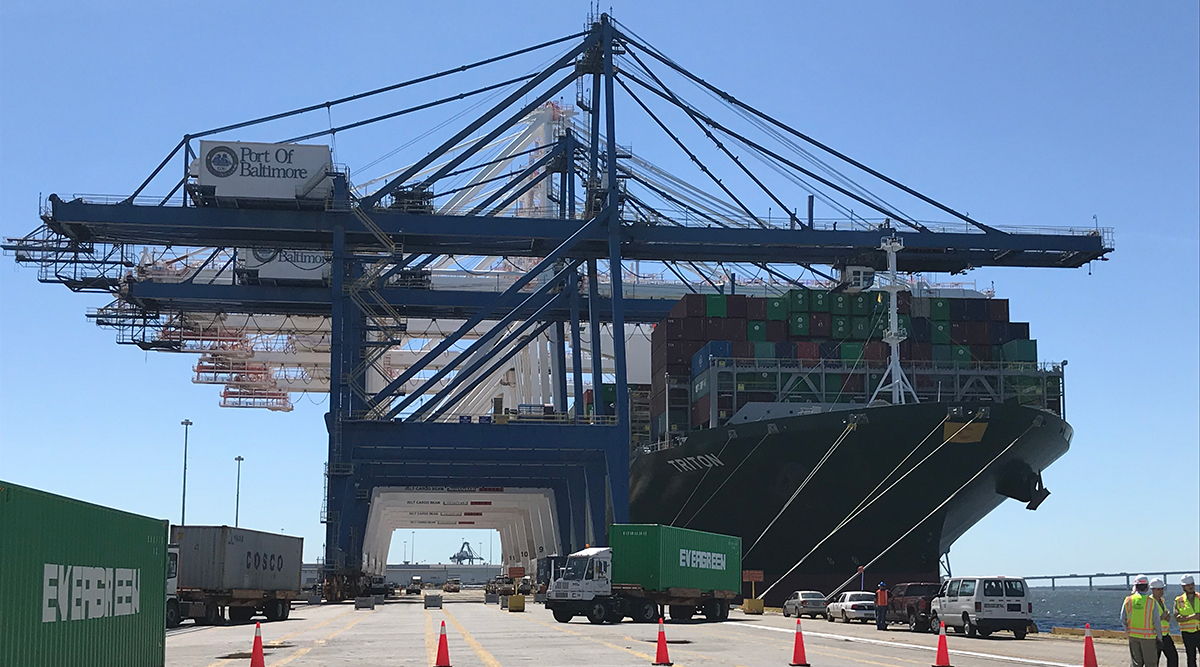 Evergreen Line's Triton, a Neopanamax ship, is 1,210 feet long, the length of nearly four football fields. If stood on its end, it would reach 90 stories high. (Dan Ronan/Transport Topics)

Towering over the Port of Baltimore’s Seagirt Marine Terminal, Evergreen Line’s containership Triton arrived in the pre-dawn hours of May 24 after navigating the Chesapeake Bay carrying 14,424 containers, making it the largest container vessel to dock in Maryland.

Stacked with 20-foot equivalent unit (TEU) containers, the ship left Xiamen, China, on April 19 and journeyed across the Pacific Ocean, through the Panama Canal, then up the East Coast to Baltimore.

In less than 36 hours after the vessel docked, longshoremen unloaded an estimated 3,500 TEUs (about a quarter of the cargo), which will be delivered by truck or by rail. The Triton was laden with a mix of clothes and consumer electronic products, including TVs, radios, cellphones and toys.

At 1,210 feet, the Neopanamax ship is the length of nearly four football fields. If it were stood on its end, it would reach 90 stories high and could dominate Baltimore’s skyline alongside some of the largest skyscrapers in the country.

For the Port of Baltimore, attracting such huge ships is critical. It competes with other facilities along the Atlantic Coast hoping to attract more of the lucrative freight-shipping business as a result of the expanded Panama Canal, which opened in June 2016. 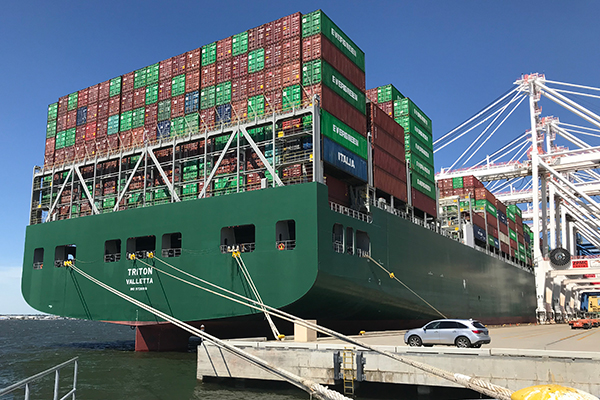 Port of Baltimore officials told reporters the ship’s arrival and unloading heralds a new era, especially since the port is the closest Atlantic port to the country’s Midwestern metropolitan areas and just a one day drive by truck to a third of the nation’s population.

“It makes sense to put the freight where the consumer is. This is just the beginning for us,” Maryland Port Administration Executive Director James White said. “This is actually nine years in the making. We entered into a private-public partnership with Ports America, and we knew with the Panama Canal — the new set of locks coming online — that the bigger ships calling the U.S. West Coast would now have the ability to get to the East Coast.”

The Port of Baltimore was buzzing as crane operators, hundreds of feet above ground, lifted containers off of the giant ship to place them on chassis, where they were secured and then driven through the shipyard. Truck drivers maneuvered like a conga line, waiting their turn to receive a container. A few miles away, the process was reversed as the cargo was loaded onto another truck and driven out of the port.

To accommodate larger ships, the Port of Baltimore has undertaken major infrastructure projects, including adding larger cranes and dredging the channel to 50 feet and adding a 50-foot berth.

“Thanks to Maryland’s investment in a 50-foot berth, every year, we are seeing larger and larger containerships choosing the Port of Baltimore,” Gov. Larry Hogan said. “Maryland truly is open for business.” 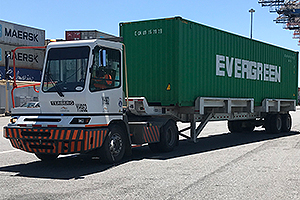 An Evergreen truck moves cargo from the ship to another location. (Dan Ronan/Transport Topics)

When the Triton went through the Panama Canal on May 15, it was the biggest to ever transit the expanded canal, and it needed a special exemption because it was almost 10 feet wider than the canal allowed, according to Panama Canal Authority.

“It’s really about what’s the maximum size they can handle through the canal moving forward. I think you’re talking about just a couple of meters on either side of this ship as it transits through the canal,” said Bayard Hogans, vice president of Ports America Chesapeake, operator of Seagirt Marine Terminal under a public-private partnership with the Maryland Port Administration.

But aside from difficulty squeezing the hulking ship through the locks, Panama Canal officials this spring have also been concerned about falling water levels due to a severe drought. The lack of rain has lowered the water level of the country’s Gatun Lake, a major water supplier for the canal.

The Panama Canal authority said its construction program between 2009 and 2016 to add the Cocoli and Agua Clara Locks provided a third lane to the canal for the transit of Neopanamax vessels, which carry more than 14,000 TEUs. The expansion is the largest enhancement project since the canal opened in 1914.

Now operators of East Coast ports can receive cargo in amounts that rival their counterparts on the West Coast, home to the Port of Los Angeles, the nation’s largest.

The Maryland Department of Transportation, the Maryland Ports Administration and Ports America Chesapeake announced in December a multimillion dollar project to develop a second 50-foot-deep container berth whereby two Neopanamax ships will be able to dock simultaneously. Construction on the berth will begin by the end of the year and become operational by early 2021.