Pelosi Regroups on Infrastructure With Hopes for Vote Today 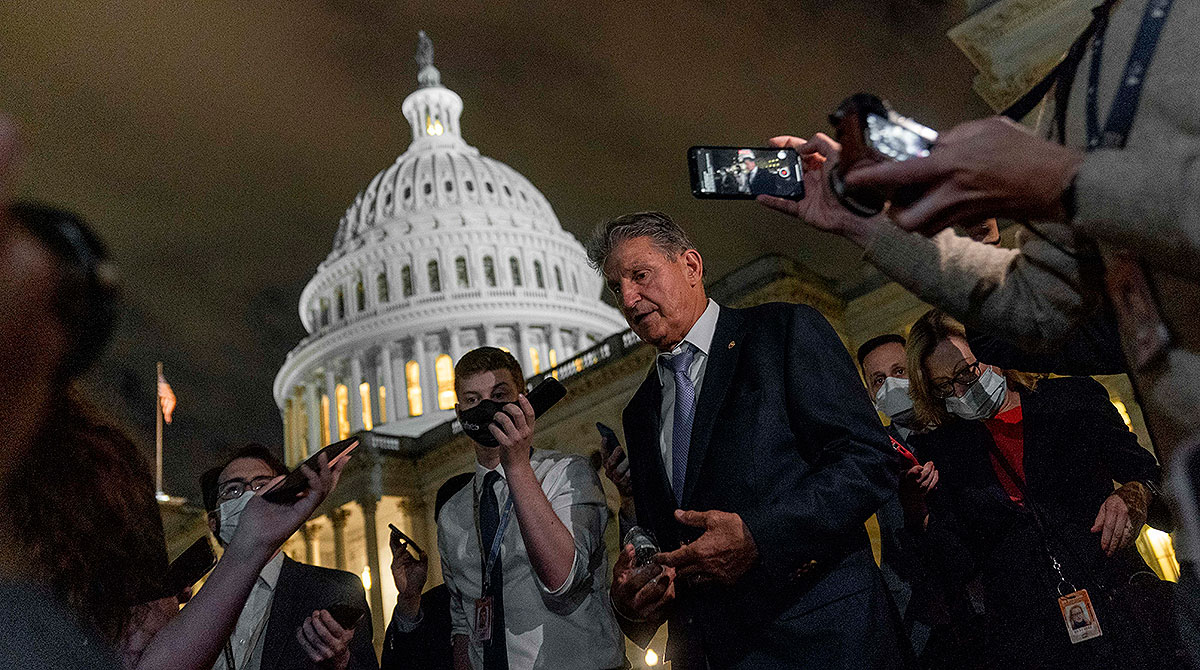 Manchin speaks to reporters outside the Capitol after meeting with Sinema, Rice, Deese and other White House officials late Sept. 30. (Andrew Harnik/AP)

House Speaker Nancy Pelosi (D-Calif.) plans to try again Oct. 1 for a vote on bipartisan infrastructure legislation that has been held up by a battle between moderate and progressive Democrats over President Joe Biden’s economic agenda.

Authorization for federal highway programs ran out at midnight Sept. 30 and the delayed vote on the infrastructure bill risks project delays and job cuts. More than 2,500 Federal Highway Administration employees would be furloughed, according to the Department of Transportation.

Lawmakers will pick up where they left off late Sept. 30, when Pelosi sent them home after hours of negotiations failed to produce an agreement in a setback for Biden. Top White House officials had spent the evening shuttling around the Capitol to meet with the warring factions yet fell short of a breakthrough. Biden was scheduled to meet with Democrats at 3:30 p.m. EDT. In an effort to stem leaks from the meeting, a notice sent to members said that mobile phones won’t be permitted.

“There’ll be a vote today,” Pelosi said as she departed the Capitol after midnight Oct. 1.

But progressives are still vowing to stall the $1 trillion infrastructure bill if the House and Senate don’t first vote on a tax-and-spending package worth as much as $3.5 trillion. That measure forms the bulk of Biden’s agenda and funds a broad expansion of social programs, including child care, elder care and paid family leave.

Moderates are balking at the overall cost and have argued they should push through the infrastructure bill, which passed the Senate with bipartisan support, while they negotiate the details of the larger measure.

The delay Sept. 30 underscored the vulnerability of Biden’s economic plans, with the success of his presidency hanging on the outcome and members of his own party, rather than Republicans, posing the biggest immediate threat. Despite the rift between moderates and progressives, White House officials expressed optimism about the bill’s chances on Oct. 1, when talks will resume.

“A great deal of progress has been made this week, and we are closer to an agreement than ever. But we are not there yet, and so, we will need some additional time to finish the work, starting tomorrow morning first thing,” White House Press Secretary Jen Psaki said in a statement late Sept. 30.

It ain’t over yet! This is just one long legislative day — we literally aren’t adjourning. Negotiations are still ongoing, and we’re continuing to work. As I said earlier: grabbing some Gatorade and Red Bull.

Some moderate lawmakers echoed that optimism. “It ain’t over yet! This is just one long legislative day — we literally aren’t adjourning,” Rep. Josh Gottheimer (D-N.J.) tweeted late Sept. 30. “Negotiations are still ongoing, and we’re continuing to work. As I said earlier: grabbing some Gatorade and Red Bull.”

Gottheimer, who huddled with Pelosi after the decision to delay the vote, had said earlier he was “1,000% sure” the vote would pass Sept. 30, a statement that a prominent progressive seized on that night.

“In Congress, we don’t make predictions like this until we know we have the votes,” tweeted Rep. Ilhan Omar (D-Minn.). “Some of us get this, others bluff & fall on their face.”

Moderates have wanted to sharply reduce the spending plan while progressives have threatened to hold the infrastructure bill hostage until the larger measure, which includes new and expanded social programs, passes both chambers.

In Congress, we don’t make predictions like this until we know we have the votes. Some of us get this, others bluff & fall on their face.

Hopefully, @JoshGottheimer and the other 4% of Democrats will not obstruct but negotiate and help us get @POTUS’s agenda done for the people. https://t.co/VxeY0ueYjK

Manchin said late Sept. 30 he still wants to cut the tax and spending bill by some $2 trillion.

“We’re going to come to an agreement. I’m trying to make sure they understand, I’m at $1.5 trillion,” Manchin said.

Deese and Rice spent the night moving back and forth between the two chambers, trying to resolve the intra-party differences and meeting with Pelosi and Majority Leader Chuck Schumer (D-N.Y.). But neither wing of the party appeared willing to budge.

After meeting with Pelosi, Rep. Pramila Jayapal (D-Wash.), the head of the Congressional Progressive Caucus, sent out a fundraising email saying progressives need to “hold strong.”

Rep. Jamaal Bowman (D-N.Y.) said more than 50 members of the progressive group were ready to vote against the infrastructure bill.

A defeat wouldn’t kill the infrastructure legislation, but it would delay progress on Biden’s two-pronged economic agenda. Pelosi said she had no doubt that the bigger spending package would ultimately be enacted, despite hitches in negotiations with the Senate over the size and scope of the measure.

While there is some Republican support for the infrastructure legislation, GOP leaders have been linking that bill with opposition to the bigger tax and spending plan Democrats are pushing.

“I think the majority, the overwhelming number of our members will vote no,” House GOP leader Kevin McCarthy (R-Calif.) said.

GOP Offers $928B on Infrastructure, Funded With COVID Aid