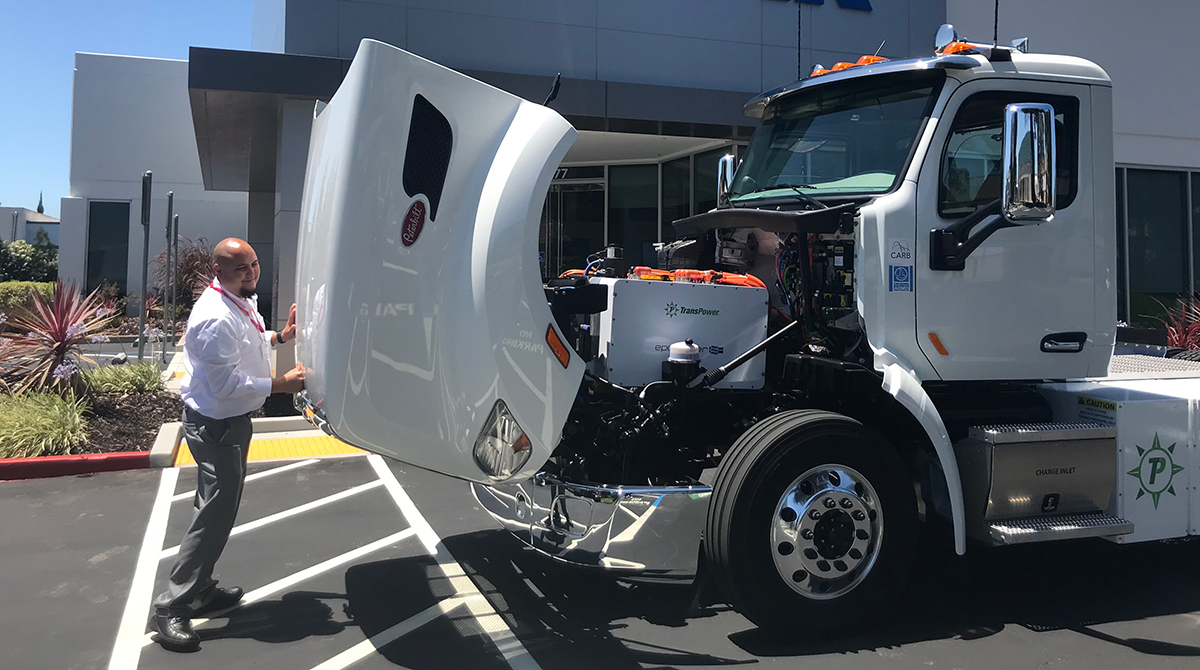 SUNNYVALE, Calif. — The strength of the overall economy, helped especially by the healthy construction and housing markets as well as fleets’ desires to have late-model equipment to recruit and retain drivers, is bolstering sales for Peterbilt Motors Co.

Retail sales for Class 8 trucks in the United States and Canada are on track to reach 265,000 to 285,000 this year, and Peterbilt is positioned to set market-share records for the second year in a row, according to Jason Skoog, general manager for the truck maker, owned by Paccar Inc.

He made the comments June 27, during a media event at the Paccar Innovation Center here.

The company displayed its 579 UltraLoft, previewed current developmental projects such as a Level 4 autonomous truck and an electric truck, and announced new options on its equipment. 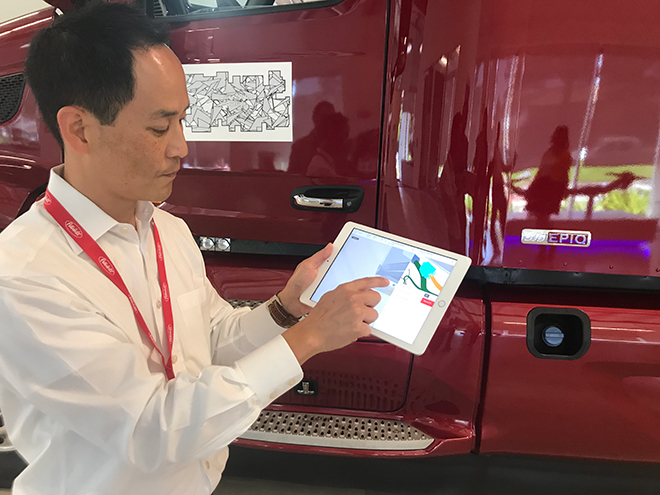 David Yin demonstrates Peterbilt’s augmented reality technology that is designed to give an X-ray view of the wiring harnesses within a Class 8 tractor. (Mindy Long for Transport Topics)

Skoog said Peterbilt has more than 2,500 orders for the Model 579, which begins production on July 2. He also said the UltraLoft sleeper has brought Peterbilt new customers.

What’s more, the manufacturer announced that the Paccar MX-11 engine is now available with the Paccar transmission.

As for electric vehicles — which include the 520 refuse truck, the 579 and the 220 — it showcased the electric demonstration model Class 8 tractor that is well suited for drayage operations.

“In the near term, applications that make sense for electric trucks include inner-city delivery, refuse and drayage,” Skoog said.

Matthew Vito, integration and commissioning manager at TransPower, a partner with Peterbilt on the tractor, said the unit on display had eight battery packs that each weighed slightly more than 800 pounds and more battery storage can be added behind the cab. The vehicle gets 150 to 250 miles per charge depending on the use, and Vito said the truck does best in applications with frequent stops and low speeds.

Peterbilt is testing the equipment throughout the year.

“The whole goal is to ensure we can make the business case so the customers can have the return on investment,” Skoog said. “We’re going to be testing those in real-world applications and once we have that, we’re going to share it with our customers.”

Peterbilt also announced two new options to its existing Models 567 and 579 trucks: an alert switch in the sleeper control panel, and a pass-through seat.

The alert switch in the sleeper flashes external lights and sounds alarms when activated. The manufacturer developed it with the organization Women In Trucking. “If an operator is in the cab and feels threatened, they can push the red button that will sound the horn,” said Scott Newhouse, chief engineer at Peterbilt.

The pass-through seat was also introduced in response to customer input to help drivers when they are packing their vehicles. It’s a storage cabinet located under the passenger seat and accessible from both the inside and outside of the cab so that drivers can load the cabinet before climbing into the cab, and unload it once they are inside the truck.

In addition, Peterbilt has made Bendix Wingman Fusion standard on all Peterbilt Model 579 trucks built as of July 1. The technology provides cameras and radar, and can reduce throttle and more. 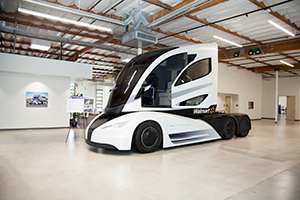 A look inside the Paccar Innovation Center. (Paccar)

Peterbilt is also extending its investment in augmented reality for service. In a demonstration David Yin, a company IT project manager, showed how users can interact virtually with schematic information from the vehicle. Repairs done with the technology have resulted in a 15% to 20% efficiency gain, according to Yin, allowing dealerships to get drivers back on the road faster. Initial tests have proven the business case for the technology, which Skoog said should be rolled out to Peterbilt dealerships next year.

Peterbilt, based in Denton, Texas, has a dealer network of 372 locations. Skoog said that is expected to grow to 390 locations by the end of the year.

Jake Montero, general manager of the Innovation Center, said Peterbilt is working to understand what the business case is for much of the latest technology. The center has a five-bay truck lab, which includes a fabrication center, and space for 50 employees.

He unveiled a potential timeline for rolling out new systems, including platooning, predictive maintenance and lane-keeping technology in 2019, object detection in 2020 and autonomous technology in 2021.

Since November some 125 startups have met at the center, said Paul Konasewich, director of business development at the Innovation Center. He said part of Paccar’s goal is to educate startups on how trucking works, how its customers operate and what makes business sense for them.

In the near future, Peterbilt will be launching traffic jam assist, lanekeeping and platooning.

“These are the building blocks for us to bring additional capabilities to our customers in the future,” Newhouse said.