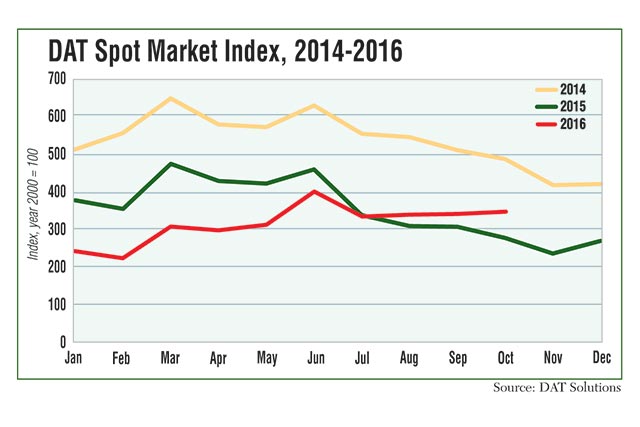 This story appears in the Nov. 21 print edition of Transport Topics.

October was the second-strongest month for spot-market trucking this year, behind the June peak, load board DAT Solutions reported, and industry analysts say that prices have bottomed out and the trajectory will continue upward.

The DAT North American Freight Index rose by 1.8% from September to 349, which is 27% higher than October 2015. Compared with last year, the index has gone up in each of the past three months, after declines from January through July. DAT uses business activity from the year 2000 as a baseline of 100.

Freight availability went up in October because more loads were posted online compared with the same time a year ago, DAT said.

“We’ve really seen a big recovery of freight in the spot marketplace starting in May, as far as overall volumes, so we think the bottom was in April,” DAT analyst Mark Montague said.

There has been some disagreement on timing among market watchers.

Robert W. Baird & Co. reported that for the first time this year, spot rates posted a year-over-year gain using a 13-week average. In contrast, October numbers from DAT show rates lagging behind volumes, with pricing 2.9% lower than a year ago, while Truckstop.com said the numbers are slightly higher, year-over-year.

“The spot market isn’t robust by any stretch of the imagination, but it has stabilized from very weak levels from a year ago, and we’re at or nearing a trough,” Baird analyst Benjamin Hartford said. “It’s not so that we’re seeing spot market fundamental strength as much as we are lapping easy [comparisons] to 2015.”

Jason Seidl, analyst with Cowen & Co., said spot rates have been about 1% to 2.5% higher than contract rates since June.

“This lends further credence to our view that we are off the bottom of the market and may be nearing a turning point. If weather this winter is bad enough to cause havoc in the supply chain, we would expect this gap to expand further,” he wrote in an investors’ note.

Jon Starks, chief operating officer at consultant FTR, said some of the stronger spot market can be attributed to flatbed trucks. Sequentially, volume jumped 11% and flatbed rates increased 0.6% from September. Year-over-year flatbed volume rose 0.5%, the first such increase in the DAT index in 16 months.

“The flatbed environment typically starts to really drop down this time of year, but it’s holding quite steady and that’s certainly surprising,” Starks said. “Part of the weakness we had earlier this year was related to the inventory situation and issues in the construction sector. At a minimum, construction is stabilizing, and there are some positives being reported.”

Hurricane Matthew also brought a momentary flurry in flatbed activity to assist in the rebuilding efforts. In the dry van sector, west-to-east longhaul shipping also jumped because of the Hanjin Shipping Co. bankruptcy, which disrupted the supply chain and forced some cargo owners to pay extra to get their containers delivered faster to make up for the delay.

“There aren’t fewer trucks overall; there are fewer trucks looking for loads because the drivers are busy. The carriers aren’t posting their trucks at such a high rate because they’re able to book loads just through a search on the board,” said Peggy Dorf, market analyst at DAT.

Starks added that some carriers moved their trucks into the dedicated contract carriage market because those rates had been better most of the year, creating tighter capacity in the spot market. Other smaller trucking companies failed and exited the market altogether.

“Our market demand index is about 73% higher than last year, through the second week in November, which is an indication that the market certainly has come back from where it was. If you compare it to 2014, it’s still down overall, but the numbers are moving in a positive direction now,” Starks said.

The analysts agreed that the spot market should continue to remain stable, although not necessarily strong, through the first quarter in 2017.

“However, I think there is a lot of uncertainty as it relates to the new administration and the immediacy of the hopeful impacts that it will bring. To me, all eyes are on how the dollar performs next year,” Hartford said of foreign exchange rates that could affect the imports and exports of manufactured goods.