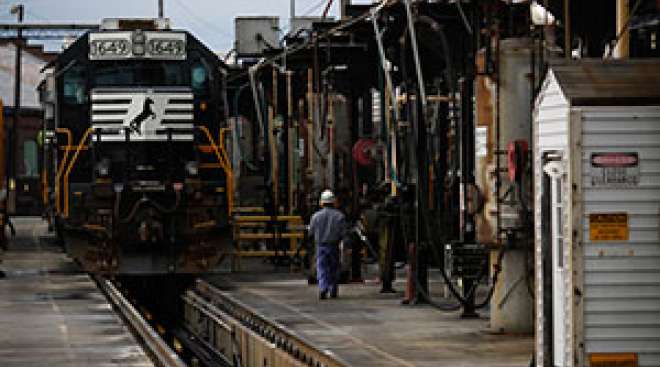 Norfolk Southern Corp. is gaining political and customer support for rejecting Canadian Pacific Railway Ltd.’s takeover bid, which could make it harder for the Canadian company and investor Bill Ackman to wage a proxy fight.

The U.S. Surface Transportation Board on Jan. 8 posted on its website 17 letters from shippers and lawmakers expressing concern or opposition to the combination. The regulator said in 2001 that it wouldn’t approve a deal unless it was confident that service and competition wouldn’t be harmed.

“An end-to-end merger in today’s already highly concentrated rail industry threatens what remains of other forms of competition,” according to a Dec. 22 letter from the Alliance of Automobile Manufacturers and the Association of Global Automakers that was posted by the STB.

Canadian Pacific CEO Hunter Harrison has vowed to take his merger proposal directly to Norfolk Southern shareholders after the U.S. railroad rejected a sweetened offer on Dec. 23 and called it “grossly inadequate.” Canadian Pacific responded that the U.S. carrier’s board wasn’t aligned with shareholders’ interests.

“If this is going to be a street fight, so be it,” Harrison said in a Dec. 16 conference call in which he was joined by Ackman. His Pershing Square Capital Management is the largest shareholder of Canadian Pacific and won a proxy fight to install Harrison in 2012.

Harrison has said the merger would create a coast-to-coast railroad and will help lift Norfolk Southern’s operations from being the worst in efficiency among large railroads.

“We do not believe this acquisition or hostile takeover, if CP chooses to go in that direction, is in the public interest, nor will it benefit rail shippers, workers, and the standards set forth” by the STB, said a letter signed by Rep. Peter DeFazio, the ranking Democratic member of the House transportation committee. Rep. Bill Shuster, the committee’s chairman and a Republican, didn’t sign the letter.

The statements of opposition offer “more evidence that NS leadership continues to mislead all stakeholders, including shippers, trade unions and lawmakers before they have even sat down with us to discuss the details of this transformational opportunity,” Marty Cej, a Canadian Pacific spokesman, said Friday by e-mail.

If more rail customers oppose the takeover, Canadian Pacific may be less inclined to wage a proxy fight, said Lee Klaskow, an analyst with Bloomberg Intelligence. “If your future customers don’t want you, that’s not a good way to start a business relationship,” he said.

“No matter where this transaction heads, there’s going to be a lot of theater and noise around it.”