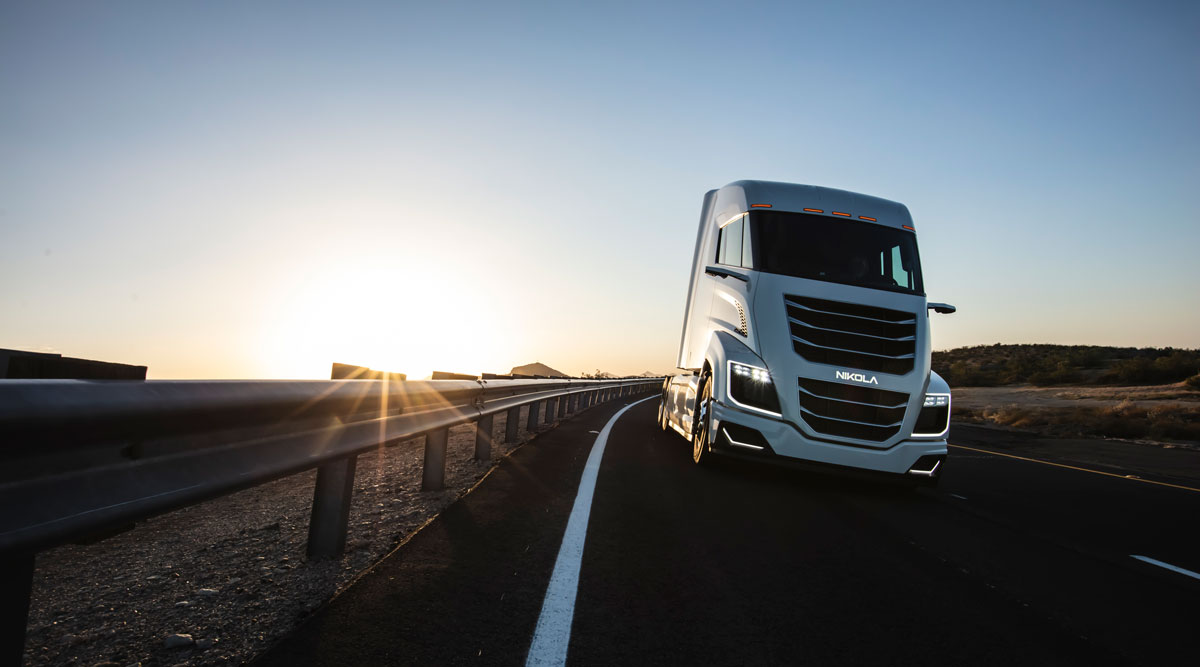 His company has sent his net worth soaring to $7.4 billion, but Trevor Milton is frustrated.

The executive chairman of Nikola Corp. is under siege from skeptics of the company he started in 2014 with the goal of revolutionizing the trucking industry. The doubters who have him particularly down are criticizing him for taking orders for hydrogen fuel cell-powered semis and saying they’re worth $10 billion.

The number has come under scrutiny for a few reasons. For starters, reservations for Nikola’s truck cost nothing. Milton says the company took money initially but paid it all back after Tesla Inc. got criticized for funding itself a similar way.

“We had deposits with thousands and thousands of trucks, and we just decided, ‘You know what, it’s not worth people thinking that we’re a Ponzi scheme, fake startup that’s using people’s money,’” Milton said in an interview June 11 from his Utah ranch.

Now, with 14,000 orders but no cash to show for it, the antagonists are out in full force. The pro-Tesla community is particularly harsh.

“People started bashing us because they said, ‘Oh you don’t have deposits.’ It’s like, good hell, you can’t win with these people,” Milton said. “No matter what you do, you can’t win.”

Of course, converting free orders into binding contracts with paid deposits is just the start of the challenges ahead. Milton, 38, first showed Nikola’s debut semi-truck 3½ years ago and has produced only prototypes thus far. Its business model — bundling big rigs and the hydrogen to fuel them upfront — has yet to be tested. Toyota Motor Corp. is five years into producing its first fuel cell car, and the richest and most valuable automaker in the world has barely gotten sales off the ground.

Time will tell if Nikola’s surge in its first week of trading was a story of short-lived exuberance, where an unproven startup rode a wave of retail investors gobbling up shares of shaky companies. After a two-day retreat, the stock surged as much as 15% before the start of regular trading June 12. Milton, who owns about a third of Nikola — a stake investors valued as high as $10 billion this week — says he doesn’t care.

“It’s really part of the noise,” Milton said. His focus is on building Nikola, and he can’t sell any shares for the next 12 months. “I don’t really have any emotion to those numbers because they’re not real right now when it comes to my vision for the next five or 10 years.”

Nikola’s stock doubled June 8 after Milton tweeted the company will start taking reservations for a pickup model called the Badger. He didn’t mention until after the market closed that deliveries are still two years away and subject to a partnership with an established manufacturer that has yet to be announced.

The next day, Milton told Yahoo Finance that his goal was to dethrone the F-150, the crown jewel of Ford Motor Co.’s pickup franchise that’s topped U.S. sales charts for the last 43 years. Nikola finished the day with almost the same market value as Ford, which had $156 billion of revenue last year. 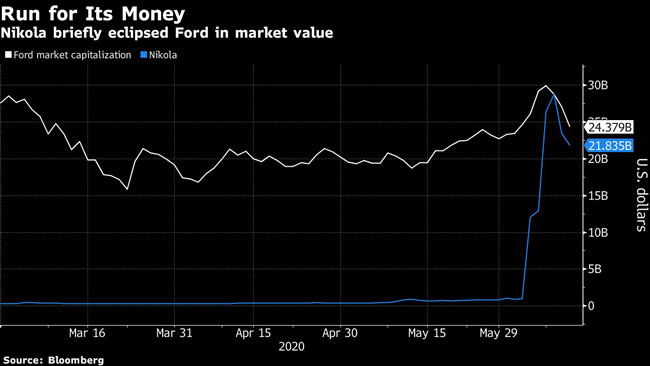 A company that isn’t expecting to have its first $1 billion revenue year until 2023 suddenly rivaling Ford drew some attention. Andrew Left, the outspoken short seller and founder of Citron Research, predicted Nikola’s stock price, which got as high as $93.99 in intraday trading June 9, would be back to $40 in a month.

“You can’t even borrow the stock now because everybody wants to short it,” said Left, who confirmed by phone June 11 that he is among those betting against the shares. “I wouldn’t be surprised if they never get a truck on the road.”

$NKLA back to $40 in a month. The anti-Tesla If you buy here you deserve to lose your $$ considering Milton sold just a week ago at $10. When $TSLA had this mkt cap the Model S was scaled and X was produced. There is no real IP at $NKLA and PR's have been overly promo — Citron Research (@CitronResearch) June 9, 2020

“He never even bothered reaching out,” Milton said of Left. “He doesn’t [care] about the facts.”

Milton’s big ambitions, Twitter sparring and choice of name for his company have drawn inevitable comparisons with Elon Musk, who ranks 209 spots higher on the Bloomberg Billionaires Index with an estimated $47.4 billion net worth.

In addition to being named after the same famed inventor, the companies share the goal of shaking up the trucking market. Nikola sued Tesla in May 2018, claiming the maker of the Model 3 had copied patented design features of its tractor trailers.

Musk called the suit “laughable” and said the claims were “absurd” on an earnings call the day after Nikola filed its complaint.

Nikola’s stock retreated June 10 after Musk, 48, told employees in an internal email it was “time to go all out” and put Tesla’s Semi into volume production.

“He doesn’t like us, and that’s OK,” Milton said of Musk.

Born in Utah in the early 1980s, Milton grew up on a farm and spent 18 months in Brazil teaching English on a church mission. He called living in the slums “a humbling experience.”

He then studied Spanish in Puerto Rico before returning to the U.S. He sold his first venture — an alarm system company — for about $1.5 million. “I thought I was on top of the world,” he said.

Except I flunked out of high school:) Had to go back and get my GED. How funny is that. — Trevor Milton (@nikolatrevor) June 9, 2020

Other pursuits followed before Milton founded dHybrid Systems, a storage technology company for natural gas that was acquired by metals manufacturer Worthington Industries Inc. Milton left to establish Nikola in 2014 and agreed to a $2 million seed investment from his former employer on the back of a napkin.

He picked up more investors along the way. Activist Jeff Ubben of ValueAct Capital Management cold called him in 2017 and ended up putting in more than $30 million. CNH Industrial NV, the maker of Iveco trucks that’s part of the billionaire Agnelli family’s empire, invested $100 million in cash and committed to a $150 million in-kind contribution last year. 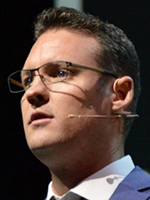 Milton, who agreed to a reduced salary last year to offset costs associated with his airplane pilot being on Nikola’s payroll, flies back and forth often between the company’s Phoenix headquarters and his ranch. When in Utah, he likes to head out on his four-wheeler.

He says speeding through the mountains helps him clear his head and recharge as he strives to prove the skeptics wrong.

“Come back in 12 months and watch how it’s done,” Milton said. “I’m an innovator, I’ll let the haters hate. I’m here to create, I’m not here to destroy.”

Tom Metcalf, Gabrielle Coppola and Ed Ludlow were the primary contributors to this report.