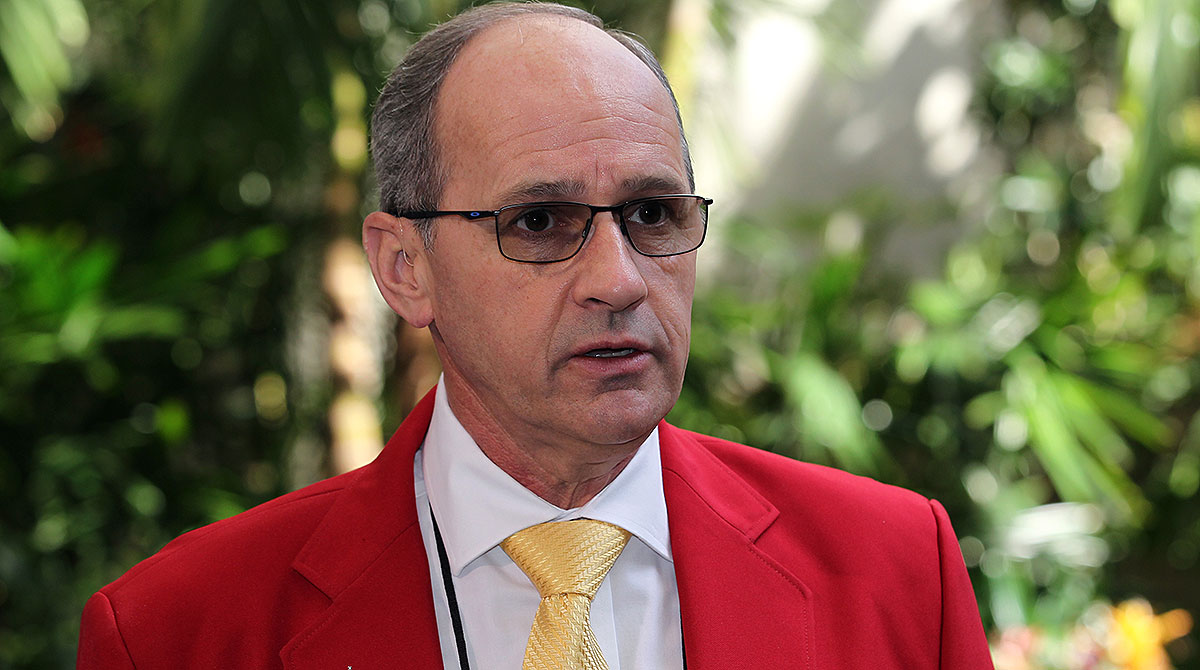 Calhoun has about 30 years of experience in the trucking industry. (John Sommers II for Transport Topics)

Advancing the Technology & Maintenance Council’s efforts to address the trucking industry’s technician shortage and enhancing education and training for entry-level workers are among the top priorities for Kenneth Calhoun, the council’s new general chairman and treasurer.

Calhoun, who is fleet optimization manager for Altec Industries, took the helm as TMC’s chairman for the next year on March 20 at the reception and banquet at the council’s annual meeting in Atlanta. TMC is a council of American Trucking Associations. 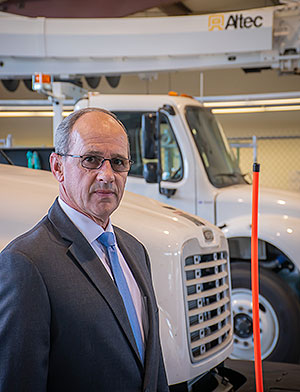 In an interview with Transport Topics a few weeks before TMC’s largest annual gathering, Calhoun, who has been in trucking for about 30 years, said it’s an exciting time for the industry — and for his area of expertise within it.

“I am absolutely fascinated with all of the disruptive factors that are coming our way out there now,” he said, referring to the “internet of things,” the electrification of trucks and automated driver-assist systems, which he dubbed one of the “building blocks” of autonomous trucks.

“What’s really cool about it is pretty much all of those categories have the ability to feed me data to help me understand how a vehicle is not only performing, but how it’s being operated,” said Calhoun, who previously served as TMC’s vice chairman and chairman of meetings.

The Birmingham, Ala.-based company operates a range of Classes 5-8 vehicles, as well as a variety of off-highway equipment, said Calhoun, who is based out of Altec’s service center in Conway, Ark. 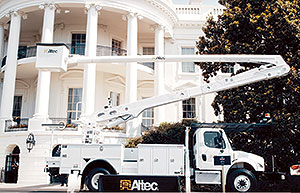 Altec participated in a "Made in America" product showcase at the White House in 2017. (whitehouse.gov)

As TMC chairman, Calhoun intends to continue the council’s push to attract more workers to service and repair the nation’s trucking equipment.

“Certainly the biggest goal that we have identified” is addressing the technician shortage, he said.

Calhoun succeeds Jeff Harris, vice president of maintenance at USA Truck, who concluded his one-year term as TMC chairman at the banquet.

“From task force involvement to study group leader, Ken has shown he can meet the challenge,” Harris told TT before the event. “Ken has both fleet and service provider experience during his long career, and he has also made great strides with TMC’s technician apprenticeship standards effort.”

Calhoun joined Altec in October 2017. That’s when Altec acquired a company that he had established in 2015, called Roanwood Maintenance Data Management, which provides data analytics for fault-code information received through telematics.

He started Roanwood when he was vice president of customer relations at TruckCenters of Arkansas, a Freightliner dealership. The owners of TruckCenters didn’t see a conflict, so he had both jobs for a while, he said.

During that time, Calhoun spoke at two conferences focused on the electric utility industry. That’s when Altec discovered him. Not long after, Altec representatives asked if he would be interested in selling his company to them and working for them.

The move “put me back in the fleet business,” Calhoun said, noting he is responsible for three company-owned fleets. Their maintenance and repair “fall squarely within my department’s responsibility.”

Roanwood became Altec Maintenance Data Management and now is part of the company’s service group. “We offer the services to external customers in addition to our internal fleets,” Calhoun said.

Each morning, Calhoun’s team receives information from various telematics systems on all the fault codes recorded during the previous 24 hours. The data comes from multiple internal and external fleets.

“For each individual fleet, we then provide a daily action report that prioritizes the faults by severity,” he said, noting that categories include “critical service now” events, “service soon” events and “maintenance required.”

From there, they attempt to find trends in that data.

“We have our biggest wins when we identify something we can tweak in our scheduled PM services that prevent the failures from occurring at all,” Calhoun said.

When asked about any pesky equipment, he said that today, aftertreatment systems are “probably the most problematic” for most fleets.

Turning to his key priority as TMC’s chairman, Calhoun said addressing the technician shortage has been “near and dear to my heart” for several years.

However, the problem isn’t unique to trucking.

“Pretty much every industry you can think of has come to the realization that when it comes to skilled labor, there’s just not any available,” he said.

“We simply find that not only the quantity but the quality of what’s being produced out there by the educational system doesn’t necessarily meet our needs,” Calhoun added.

He compared the situation to the construction of a pipeline.

“Today, we have a number of sections of pipe that are scattered around on the ground but they’re not connected,” Calhoun said, adding that TMC’s latest initiatives are aimed at connecting them.

At the council’s fall meeting, for example, TMC established an ad hoc committee focused on technician apprenticeship standards, he said, noting he introduced the motion to establish this committee. With this effort, TMC is tying the nationally accredited Automotive Service Excellence Foundation’s standards to the Industry Recognized Apprenticeship Program that TMC is creating.

This joint effort between ASE and TMC, Calhoun said, was born from an executive order issued from the White House in June 2017 — Expanding Apprenticeships in America.

“It’s designed so that someone successfully completing that curriculum has the entry-level skills that are needed in our industry,” Calhoun said. “They would be able to hit the ground very quickly on their feet in the care and maintenance of equipment.” 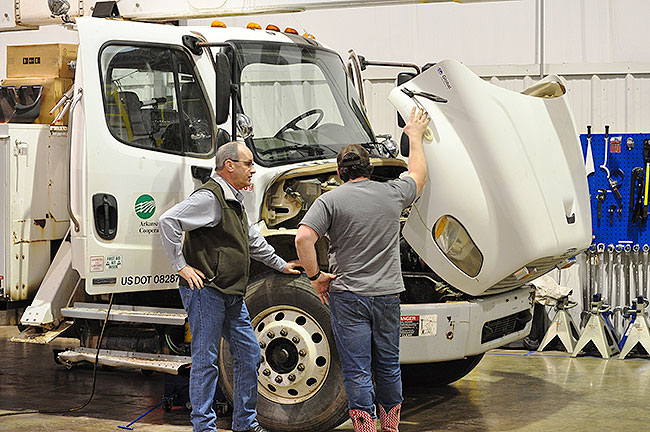 Kenneth Calhoun (left) talks with one of his technicians at Aletec's service center in Conway, Ark. (Bobby Castile/Altec Industries)

An employer also would be able to use this task list as the framework for the apprenticeship’s on-the-job learning component, he said. The IMMR task list “very likely mirrors” an employer’s scheduled PM inspection forms.

These efforts, he said, came out of a meeting with ATA President Chris Spear. “I walked away from that meeting with the understanding that Mr. Spear had challenged us to be the entity that created this industry-recognized apprenticeship. And I like a good challenge.”

Calhoun said entry-level technicians have plenty of opportunities to advance once they enter this industry.

“Our leaders are always looking for those individuals that have that extra spark, that extra initiative because we not only need them as technicians but we need them as our next foremans, our next service managers, our next directors and vice presidents of maintenance,” Calhoun said. “We’ve promoted those people up through the ranks. We are in the business of launching careers.” 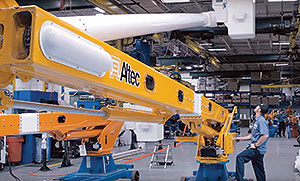 Calhoun keeps busy on related industry initiatives. Among them: He serves on the board of directors for Associated Industries of Arkansas, which is the parent organization of “Be Pro Be Proud.” This initiative takes the message about technical careers to junior high and high school students, he said.

Calhoun first began his career in trucking in about 1989 at Harold Ives Trucking Co., an over-the-road truck fleet based in North Little Rock, Ark., with about 500 tractors and 1,000 trailers.

“I worked behind the parts counter dispensing parts to technicians who were repairing trucks,” he reflected. Calhoun moved up through the ranks, including as a shop foreman for a couple of years.

He was always familiar with the trucking business, he said, noting that his brother owned a small trucking company in southern California that moved mobile homes.